How to setup iPads for school rollout. In September 2011, I completed a roll out a complete class set of iPads for use in Social Studies, History and Astronomy classes. 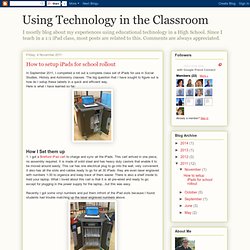 The big question that I have sought to figure out is how do I setup these tablets in a quick and efficient way. Here is what I have learned so far: How I Set them up 1. I got a Bretford iPad cart to charge and sync all the iPads. This cart arrived in one piece, no assembly required. Recently I got some vinyl numbers and put them infront of the iPad slots because I found students had trouble matching up the laser engraved numbers above. 2. 3. iPads in Schools. iPad in Education - About. Prior to purchasing the iPad, you will want to determine the purpose of your purchase. 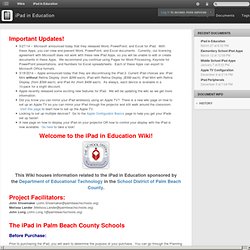 You can go through the Planning Guide below to think about everything prior to your purchase. Then you can determine exactly what you will need to purchase on the Considering Purchasing an iPad page. The Complete List of iPad Tips, Tricks, and Tutorials. The Apple iPad is an amazing tablet, and to help you get the most out of it, we’ve put together a comprehensive list of every tip, trick, and tutorial for you. 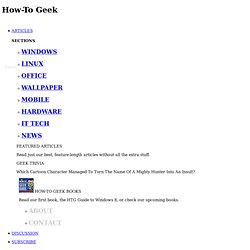 Read on for more. Note: This article was originally published earlier this year, but we’ve updated it with a real lot more content since then, so we’re republishing it for you. We’ll be keeping this page updated as we find more great articles, so you should bookmark this page for future reference. How to Maximize Your iPad’s Battery Life So you got yourself a shiny new Apple device, but you’re so addicted that the battery is running out way too soon—what you need is a couple of tips to keep your battery running for as long as possible, and we’ve got them here. 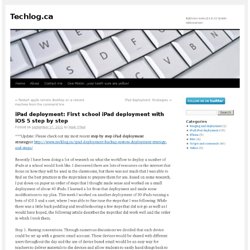 I discovered there are lots of resources on the internet that focus on how they will be used in the classrooms, but there was not much that I was able to find on the best practices in the steps taken to prepare them for use. Based on some research, I put down on paper an order of steps that I thought made sense and worked on a small deployment of about 40 iPads. I learned a lot from that deployment and made some modifications to my plan. This week I worked on another deployment of 30 iPads running a beta of iOS 5 and a cart, where I was able to fine tune the steps that I was following. Step 1. Using these new accounts we created an iTunes account for the iPad admin using a school credit card for purchases, and 30 iTunes accounts using the 30 device based email addresses. 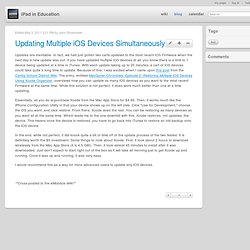 In fact, we had just gotten two carts updated to the most recent iOS Firmware when the next day a new update was out. If you have updated multiple iOS devices at all, you know there is a limit to 1 device being updated at a time in iTunes. With each update taking up to 20 minutes, a cart of iOS devices could take quite a long time to update. Because of this, I was excited when I came upon this post from the Canby School District Wiki. The entry, entitled MacGyver Chronicles, Episode 2: Restoring Multiple iOS Devices Using Xcode Organizer, overviews how you can update as many iOS devices as you want to the most recent Firmware at the same time. Essentially, all you do is purchase Xcode from the Mac App Store for $4.99.

In the end, while not perfect, it did knock quite a bit of time off of the update process of the two tested. iPhone Configuration Utility 3.5 for Mac OS X. Contact California Learns. With over a half a million Apps for iPhones, iPod Touch, and iPad, it's impossible to keep a comprehensive list of the best Apps for education in any one place. 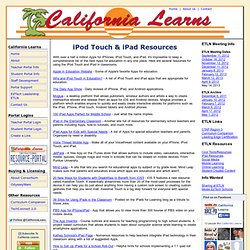 Here are several resources for using the iPod Touch and iPad in classrooms. Apple in Education Website - Some of Apple's favorite Apps for education. Why and iPod Touch in Education? - A list of iPod Touch and iPad apps that are appropriate for education. The Daily App Show - Daily reviews of iPhone, iPad, and Android applications. Moglue - a desktop platform that allows publishers, amateur authors and artists a way to create intereactive ebooks and release them as apps for iOS and Android devices. 100 iPad Apps Perfect for Middle School - Just what the name implies. iPad in the Elementary Classroom - Another site full of resources for elementary school teachers and parents including Apps, how-to tutorials, and much more. iPad in Education. iPad Resources iCan Use.