75 Reminders for Tough Times. 50+ Highly Motivational Quotes To Prepare You For 2017. Life is filled with highs and lows —peaks and valleys that will test your resilience and integrity, push you to overcome challenges and leave you with lessons that will make you even stronger on your way up. 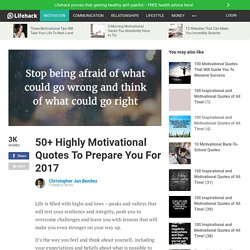 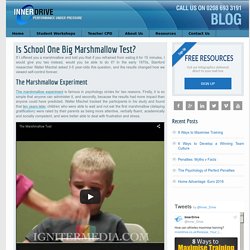 In the early 1970s, Stanford researcher Walter Mischel asked 3-5 year-olds this question, and the results changed how we viewed self-control forever. The Marshmallow Experiment The marshmallow experiment is famous in psychology circles for two reasons. Firstly, it is so simple that anyone can administer it, and secondly, because the results had more impact than anyone could have predicted.

Walter Mischel tracked the participants in his study and found that ten years later, children who were able to wait and not eat the first marshmallow (delaying gratification) were rated by their parents as being more attentive, verbally fluent, academically and socially competent, and were better able to deal with frustration and stress. Who Gives In To Temptation?

Is School One Big Marshmallow Test? How to Improve Self-Control 3. 4. 5. 4 Things to Do When Anxiety is Overwhelming - Wholly Healthy. Pinterest. Visual Metaphor: Bridging the Gap. Now that you are familiar with visual thinking metaphors and analogies, today, I would like to provide you with a practical example of a visual thinking metaphor that is often used for life coaching purposes to help clients clarify their goals and objectives. 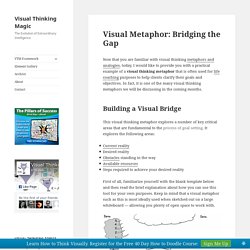 In fact, it is one of the many visual thinking metaphors we will be discussing in the coming months. Building a Visual Bridge. How to tame the monsters in your mind: Experts call them ANTS - Automatic Negative Thoughts and unless you learn how to stop them, they'll ruin your life. By Louise Atkinson Updated: 21:15 GMT, 26 December 2010 Ever dipped into the ­biscuit tin then decided you’ve ruined your diet so you may as well eat the lot? 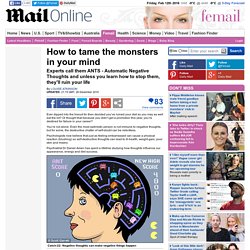 Or thought that because you didn’t get a promotion this year, you’re destined for failure in your career? You’re not alone. Even the most optimistic person is not immune to negative thoughts, but for some, the destructive chatter of self-doubt can be relentless. Psychologists now believe that just as feeling embarrassed can cause a physical ­reaction (blushing) so self-destructive thoughts can lead to ill-health, weight-gain, poor skin and misery. My Year Without Clothes Shopping. Today I’d like to talk about willpower. 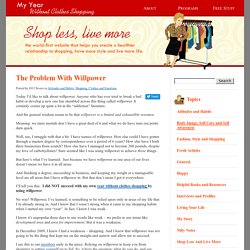 Anyone who has ever tried to break a bad habit or develop a new one has stumbled across this thing called willpower. It certainly comes up quite a lot in the “addiction” literature. And the general wisdom seems to be that willpower is a limited and exhaustible resource. Meaning: we mere mortals don’t have a great deal of it and what we do have runs out pretty darn quick. Well, see, I struggle with that a bit. But here’s what I’ve learned: Just because we have willpower in one area of our lives doesn’t mean we have it in all areas.

And finishing a degree, succeeding in business, and keeping my weight at a manageable level are all areas that I have willpower in. I’ll tell you this: I did NOT succeed with my own year without clothes shopping by using willpower. No way! I know it’s unpopular these days to use words like weak – we prefer to use terms like development area and area for improvement. In December 2009, I knew I had a weakness – shopping. 1. Draining Willpower and Reason - Emotional Detective. This is the fifth segment in a series on Reason﻿﻿We all spend A LOT of time (and energy) trying to control ourselves. 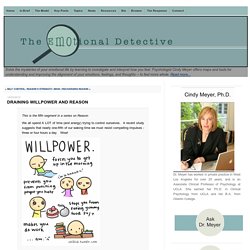 A recent study suggests that nearly one-fifth of our waking time we must resist compelling impulses - three or four hours a day. Wow! We often waste unnecessary mental energy on situations that are overwhelming and tempting, situations that should be so-called “emergency cases.” Tempting circumstances drain our energy, requiring us to resist things we really desire (like delicious food, new purchases, or illicit romance.) Using willpower to resist immediate temptation depletes energy that could otherwise be channeled toward more productive efforts.

Most of us use reason’s gadgets more than we know.