Electric bike blog. Introduction to InstaSPIN™-BLDC Motor Control Solution. Brushless DC Motors & Control - How it Works (Part 1 of 2) Behold the hubless wonder – the E'lution EVO scooter. Whether they're on a motorcycle from Star Trek or a far-out concept bike, hubless wheels are generally one of those futuristic things that we don't encounter much in the real world – yet. 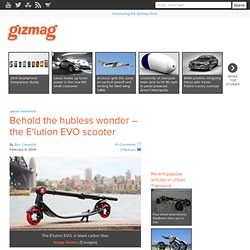 Soon, however, you may be able to buy an E'lution EVO folding kick scooter, that comes equipped with a set. View all First of all, a quick Googling shows that there are already a few hubless-wheeled scooters out there, although they appear to mostly be fairly cheap novelties. E'lution's scooter, is intended to be more of an upscale, less toy-like form of human-powered transportation. The 6-kg (13.2-lb) base model features things like a bent plywood deck, a unique vented braking system that is said to minimize brake pedal overheating, and built-in mudguards. Both models, however, feature the patented hubless wheels. The Sydney-based company is now raising production funds for the EVO, on Kickstarter.

You can see the scooters in use, in the pitch video below. Sources: E'lution, Kickstarter About the Author. DIY E-bike: new motor 48v 1000w. Car ac brush alternator Model No.JF292, View brush generator, Linyu,LIANYU Product Details from Longyan Jia Xin Machinery Co., Ltd. on Alibaba.com. Alternator $37. Magic pie electric bike motor. The inside of an e-bike hub motor, with planetary gears. Torque Sensors on Electric Bikes. A torque sensor is a type of throttle that determines how much juice to feed the motor based on how hard the rider is pedaling. 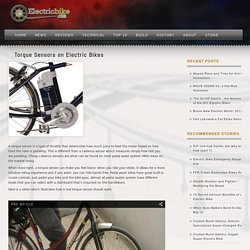 This is different from a cadence sensor which measures simply how fast you are pedaling. Cheap cadence sensors are what can be found on most pedal assist system (PAS) bikes on the market today. When done right, a torque sensor can make you feel bionic when you ride your ebike. It allows for a more intuitive riding experience and if you want, you can ride hands free. Pedal assist bikes have great built-in cruise controls. Here is a video which illustrates how a real torque sensor should work: So why aren’t torque sensors on every electric bike? Torque sensors add considerably to the cost an electric bike. The US market is different from the European market in these ways: The limit on European bikes is only 250 watts, but the limit on US bikes is a decent 750 watts. Advantages of a torque sensor: Are torque sensors worth it? Bottom bracket designs Crank sensor Related.

Everpres.pdf. FFv1.1 Ground Firmware Testing / FFv1.2s. Melonscooter, so named for the "melon-sized" Turnigy C8080-170 brushless motor that drives it, has been through a lot of motor controllers. 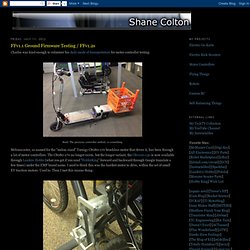 The C8080-170 no longer exists, but the longer variant, the C80100-130 is now available through Leaders Hobby (what you get if you send "HobbyKing" forward and backward through Google translate a few times) under the EMP brand name. I used to think this was the hardest motor to drive, within the set of small EV traction motors. Used to. Then I met this insane thing: After attempting to drive this two-turn monster e-bike motor with only marginal success, the C8080-170 looks rather tame. 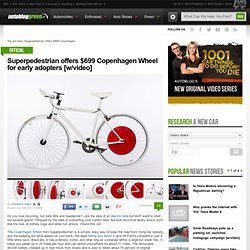 Like the idea of an electric bike but don't want to shell out several grand? Intrigued by the idea of converting your current bike, but lack technical ability and/or don't like the look of battery bags and wires run amock. Check this out. The Copenhagen Wheel from Superpedestrian is a simple, easy way to keep the road from rising too steeply and the keeping the wind always at your back. We were telling you about it (and its FlyKly competitor) just a little while back. Weighing in at a modest 13 pounds, the Copenhagen wheel can initially only be used with a "single speed freewheel and 9 and 10 speeds cassette," with other options coming eventually. NuVinci unveils cheaper continuously-variable transmission for bicycles. The NuVinci N330 planetary hub transmission, with its C3 controller Shifting gears while cycling can be a hassle, which is why a growing number of bicycle manufacturers are outfitting their bikes with the NuVinci N360 continuously-variable hub transmission. 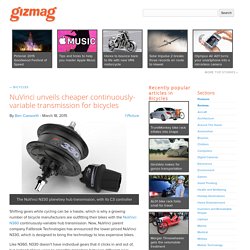 Now, NuVinci parent company Fallbrook Technologies has announced the lower-priced NuVinci N330, which is designed to bring the technology to less expensive bikes. Like N360, N330 doesn't have individual gears that it clicks in and out of, but instead allows users to smoothly transition between different gear ratios. ADAPTRAC changes mountain bikes' tire pressure on the fly - Images. Chainless Bicycle, Smart TARA Bike.