Simplifying Firewall Management. GitHub - lkettenb/sound-output-switcher: A indicator applet for the Ubuntu Unity desktop to switch the sound output. How to hot-swap SATA drives in Linux. Q I have several 500GB SATA hard drives with all my movies on them. 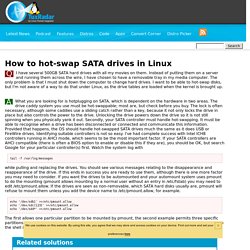 Instead of putting them on a server and running them across the wire, I have chosen to have a removable tray in my media computer. The only problem is that I must shut down the computer to change hard drives. I want to be able to hot-swap disks, but I'm not aware of a way to do that under Linux, as the drive tables are loaded when the kernel is brought up. A What you are looking for is hotplugging on SATA, which is dependent on the hardware in two areas. The drive caddy system you use must be hot-swappable; most are, but check before you buy. Tail -f /var/log/messages while pulling and replacing the drives. Echo '/dev/sdb1' >>/etc/pmount.allow echo '/dev/sdc[123]' >>/etc/pmount.allow echo '/dev/sdd*' >>/etc/pmount.allow The first allows one particular partition to be mounted by pmount, the second example permits three specific partitions on a drive, while the third lets through every partition on a drive.

Keep Your Linux SSH Session From Disconnecting. I’m the type of geek that has an SSH client open at all times, connected to my most frequently used servers so that I have instant access for monitoring and anything else. 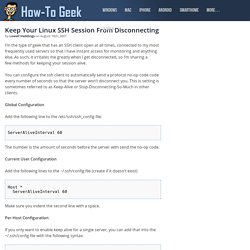 As such, it irritates me greatly when I get disconnected, so I’m sharing a few methods for keeping your session alive. You can configure the ssh client to automatically send a protocol no-op code code every number of seconds so that the server won’t disconnect you. DEVICE AND NETWORK SETUPS ON UBUNTU - Karnataka Open Educational Resources. Your IP address is something you probably rarely think about, but it's vitally important to your online lifestyle. 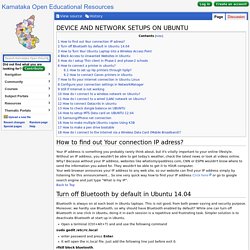 Without an IP address, you wouldn't be able to get today's weather, check the latest news or look at videos online. Why? Because without your IP address, websites like whatismyipaddress.com, CNN or ESPN wouldn't know where to send the information you asked for. Loops - Bash Scripting Tutorial. Loops! 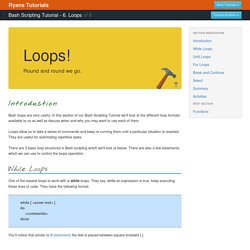 Round and round we go. Introduction Bash loops are very useful. In this section of our Bash Scripting Tutorial we'll look at the different loop formats available to us as well as discuss when and why you may want to use each of them. Install vnc server and client on Linux and Setup remote desktop sharing on KDE. VNC stands for Virtual Network Computing or in simple terms its ‘Remote Desktop’. 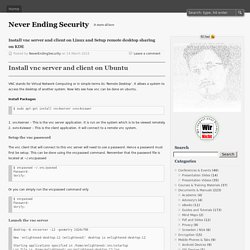 It allows a system to access the desktop of another system. Now lets see how vnc can be done on ubuntu. Install Packages $ sudo apt-get install vnc4server xvnc4viewer 1. vnc4server – This is the vnc server application. Setup the vnc password. HowTo: Add Pause Prompt In a Shell Script ( bash pause command ) Revive Your Old PC: The 3 Best Linux Systems For Old Computers. Windows 8 may be lighter than Windows Vista, but it’s nowhere near as lightweight as these free Linux distributions. 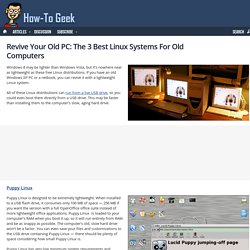 If you have an old Windows XP PC or a netbook, you can revive it with a lightweight Linux system. All of these Linux distributions can run from a live USB drive, so you could even boot them directly from a USB drive. How to Quickly Create a Text File Using the Command Line in Linux. If you’re a keyboard person, a lot of things can be accomplished simply using the command line. 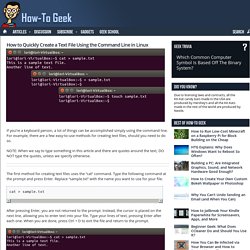 For example, there are a few easy-to-use methods for creating text files, should you need to do so. NOTE: When we say to type something in this article and there are quotes around the text, DO NOT type the quotes, unless we specify otherwise. The first method for creating text files uses the “cat” command. Type the following command at the prompt and press Enter. Replace “sample.txt” with the name you want to use for your file. How To Use ps, kill, and nice to Manage Processes in Linux. Introduction A Linux server, like any other computer you may be familiar with, runs applications. 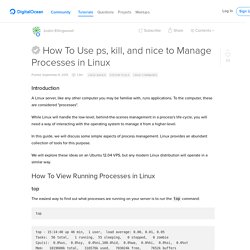 To the computer, these are considered "processes". While Linux will handle the low-level, behind-the-scenes management in a process's life-cycle, you will need a way of interacting with the operating system to manage it from a higher-level. How to restore default GNOME Panels in Ubuntu. So you’ve removed a desktop panel you wished you hadn’t, ditched an applet you now realised you were quite fond of or you just long for the halcyon days when your desktop panels were all neat and tidy like a fresh install, right? 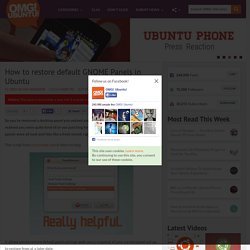 This script from starryhope.com is there to help. It allows you to restore default panel settings and save a snapshot of your current panel set-up to restore from at a later date. Download the following archive, save it somewhere accessible, locate it, right click on it and choose ‘Extract here’. Double-click on the’ PanelRestore.sh’ script that results to run. Download panel restore. How to add and remove users on CentOS 6 VPS. - Knowledgebase - VelociHOST Inc. How To Add and Delete Users on a CentOS 7 Server. How to Add a User and Grant Root Privileges on CentOS 6.5. How To Edit the Sudoers File on Ubuntu and CentOS. Introduction Privilege separation is one of the fundamental security paradigms implemented in Linux and Unix-like operating systems. 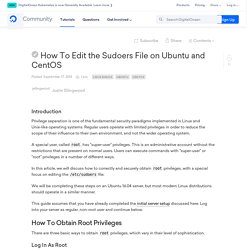 Regular users operate with limited privileges in order to reduce the scope of their influence to their own environment, and not the wider operating system. A special user, called root, has "super-user" privileges. This is an administrative account without the restrictions that are present on normal users. Users can execute commands with "super-user" or "root" privileges in a number of different ways. In this article, we will discuss how to correctly and securely obtain root privileges, with a special focus on editing the /etc/sudoers file. We will be completing these steps on an Ubuntu 12.04 VPS, but most modern Linux distributions should operate in a similar manner. This guide assumes that you have already completed the initial server setup discussed here. How to use the MTR tool to analyse network problems. Uninstall any Program in Linux (Ubuntu 14.10) How to change the hostname of a Linux system. Normally we will set the hostname of a system during the installation process.

Many peoples don’t care about this, and don’t change the hostname even if for example this was set to something really stupid by the datacenter that installed the system (most likely they will set this to “debian” on any debian installation, etc). For me, it is important to see on each one of the ssh screens I will have open at any time a different hostname that is relevant and will give me quickly the information on what system I am logged in. Change the hostname on a running system On any Linux system you can change its hostname with the command ‘hostname’ (surprised?)

… Here are some quick usages of the command line hostname: hostname without any parameter it will output the current hostname of the system. hostname --fqd it will output the fully qualified domain name (or FQDN) of the system. How to Scrape Web Pages from the GNU/Linux Shell. You can quickly scrape Web pages in a rough manner with the Lynx Browser and grep (and other tools that will be explained in the near future).

Lynx is able to dump the contents of Web pages in two ways: only the text of the page, or the entire HTML source of the page. To extract the text of a Web page with the HTML tags stripped out, you can use the -dump option like this: lynx -dump " If you want the entire source code, you can use the -source option: lynx -source " Manipulating Data on Linux. If you’re coming from Windows, the world of the Linux command line can be perplexing - you have to know what you want before you can do anything - there’s nothing to click, no wizards, few hints. So let me supply a few… I assume you’ve been forced to the Linux shell prompt somewhat against your will and you have no burning desire to learn the cryptic and agonizing commands that form the basis of xkcd and other insider jokes.

Linux / Unix: Add Line Numbers To Files. I know how to display line numbers using vim text editor. How do display line numbers in the left side for any text file under Unix or Linux operating systems? You can use any one of the following commands to display line numbers: [a] cat command. View topic - How could I run iMacros under Linux? Currently, the iMacros Scripting Interface works "only" on Windows OS, however you can use popular "Linux" languages such as Perl, Python, PHP or Ruby to script it on Windows. Of course, iMacros also runs well on a virtual machine that you can host on your Linux server. All kinds of virtual machine should work (VMware, Virtual PC, Parallels, Hyper-V,...).

We regularly regression test iMacros with VMware on Ubuntu. Some users also reported success with Wine, but we have not tested it ourself yet. We plan to release a native Linux version in the future. In this case, please also let us know what your favorite programming or scripting language on Linux is. Last but not least, you can already use iMacros for Firefox on Linux and control the browser via the command line interface: ... ne_Support. Screen Scraping for Fun and Profit. Even though the Web is roughly a decade old and there are now many options for developing Web applications, Perl is still regarded by many as "the darling language of Web programming. " Perl's text-wrangling abilities still exceed that of any other popular open source language, and a wealth of Perl modules (from the core distribution and the CPAN) makes Web applications a snap to construct and maintain.

Even though the Web is roughly a decade old and there are now many options for developing Web applications, Perl is still regarded by many as “the darling language of Web programming.” Perl’s text-wrangling abilities still exceed that of any other popular open source language, and a wealth of Perl modules (from the core distribution and the CPAN) makes Web applications a snap to construct and maintain. Text processing - Remove last character from line. Understanding the Load Average on Linux and Other Unix-like Systems. Linux, Mac, and other Unix-like systems display “load average” numbers. These numbers tell you how busy your system’s CPU, disk, and other resources are. They’re not self-explanatory at first, but it’s easy to become familiar with them. How to use same id_rsa key on multiple machines. HowTo: Setup SSH Keys on a Linux / Unix System.