Teaching Boys & Other Children Who Would Rather Make Forts All Day [Audio Download] Single-Sex Public Education - Children and Youth - Schools - Gender. And Why: Michael Reichert, Richard Hawley: 9780470532782: Amazon.com: Books. Christina Hoff Sommers: 3 Things Schools Can Do to Help Boys Succeed. Being a boy can be a serious liability in today’s classroom. 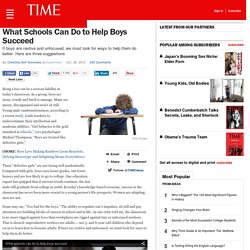 As a group, boys are noisy, rowdy and hard to manage. Many are messy, disorganized and won’t sit still. Young male rambunctiousness, according to a recent study, leads teachers to underestimate their intellectual and academic abilities. “Girl behavior is the gold standard in schools,” says psychologist Michael Thompson. “Boys are treated like defective girls.” (MORE: Boys Love Making Rainbow Loom Bracelets, Defying Stereotype and Delighting Moms Everywhere) These “defective girls” are not faring well academically. Some may say, “Too bad for the boys.” Here are three modest proposals for reform: 1. Prolonged confinement in classrooms diminishes children’s concentration and leads to squirming and restlessness. (MORE: Do Teachers Really Discriminate Against Boys?) 2. “Not for me,” is a common male reaction to reading, and it shows up in test scores. 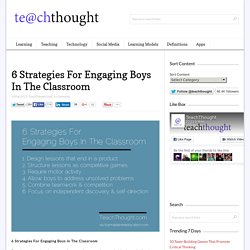 Historically, boys have been out-performed in the K-12 classroom by girls, though they have performed somewhat evenly on national standardized tests such as the ACT and SAT. The data shows that boys score a bit higher in science and math, while girls do better in language and composition. But pure testing environments–regardless of their own inherent flaws–are different than classrooms, where “performance” is dictated as much by attendance and compliance as it is genuine understanding of content. Which made the following infographic interesting. In fact, in some further digging, we found a study that suggests the ratio of female to male diagnoses of learning disabilities to be as high as 6:1 (Finucci and Childs 1981). Educating Boys for Success. By Dionna Ricks As a conscientious teacher and mother, I wanted to believe I did what was best for my students and children. 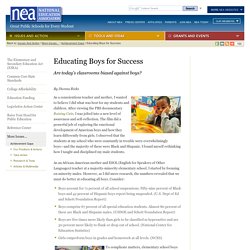 After viewing the PBS documentary Raising Cain, I was jolted into a new level of awareness and self-reflection. The film did a powerful job of exploring the emotional development of American boys and how they learn differently from girls. I observed that the students at my school who were constantly in trouble were overwhelmingly boys—and the majority of these were Black and Hispanic. Stop Penalizing Boys for Not Being Able to Sit Still at School. This year's end-of-year paper purge in my middle school office revealed a startling pattern in my teaching practices: I discipline boys far more often than I discipline girls. 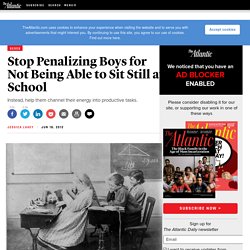 Flipping through the pink and yellow slips--my school's system for communicating errant behavior to students, advisors, and parents--I found that I gave out nearly twice as many of these warnings to boys than I did to girls, and of the slips I handed out to boys, all but one was for disruptive classroom behavior. The most frustrating moments I have had this year stemmed from these battles over--and for--my male students' attention. This spring, as the grass greened up on the soccer fields and the New Hampshire air finally rose above freezing, the boys and I engaged in a pitched battle of wills over their intellectual and emotional engagement in my Latin and English classes, a battle we both lost in the end. A study released last year in the Journal of Human Resources confirms my suspicions.

Educational Leadership:Teaching to Student Strengths:Teaching to the Minds of Boys. Boys who don't read or write as well as we'd like come in all kinds. 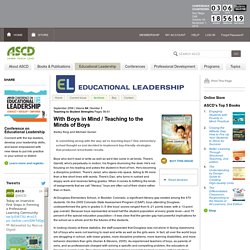 There's Garrett, who's perpetually in motion, his fingers drumming the desk. He's not focusing on his reading and pokes the student in front of him. He's becoming a discipline problem. There's Jared, who stares into space, failing to fill more than a few short lines with words. There's Dan, who turns in rushed and sloppy work and receives failing grades. At Douglass Elementary School, in Boulder, Colorado, a significant literacy gap existed among the 470 students.

In looking closely at these statistics, the staff suspected that Douglass was not alone in facing classrooms full of boys who were not learning to read and write as well as the girls were. By introducing more boy-friendly teaching strategies in the classroom, the school was able to close the gender gap in just one year. A Look into Boy-Friendly Classrooms How did Douglass manage these successes? ASCD Express 6.04 - 10 Essential Strategies for Teaching Boys Effectively.