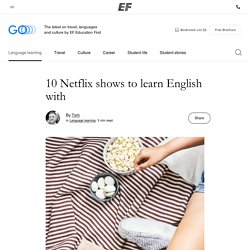 Who knew! If you’re preparing to binge-watch some of the top Netflix series, why not keep the audio in English, order some pizza, pop some popcorn, and get ready to sharpen your language skills. Here’s my pick of the best Netflix series to learn English with: 1. House of Cards Have you seen this show? 2. A woman called Piper gets sent to prison for a minor crime, and this series follows her adventures inside. 3.

Here’s one for the sci-fi fans out there; a supernatural horror comedy (sounds strange but it works) set in the 1980s. 4. I dare you not to cry laughing to this wacky comedy. 5. Want to know what the Queen of England was like before she got – you know – really old? 6. Did you watch Daredevil, Jessica Jones, Luke Cage and Iron Fist on Netflix already? How to get rid of a foreign accent in English: 5 easy steps ‹ GO Blog. How many times have people been able to guess where you’re from just by listening to your accent when speaking English? 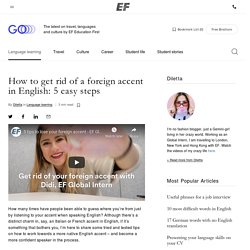 Although there’s a distinct charm in, say, an Italian or French accent in English, if it’s something that bothers you, I’m here to share some tried and tested tips on how to work towards a more native English accent – and become a more confident speaker in the process. 1. Choose your accent Think about the accent that you like the most, and that fits your personality the best. There are many accents to choose from: posh British, cool American, laid back Australian and so on. When you made your choice you have to stick to it and be consistent while talking. 2. It may seem obvious, but watching everything in English is one of the most helpful things you can do in order to learn faster and develop your accent.

I personally like watching things in the original language, instead of the dubbed version. 3. 4. The more you practice your English, the better. 5. 1. 2. 3. How to Speak English Without an Accent and Sound Like a Native. There’s nothing more frustrating than not being understood. 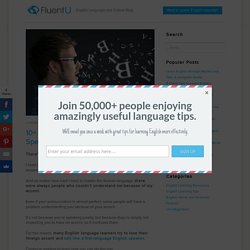 I lived in South Korea for four years. During that time, I took Korean lessons at the local university and practiced my speaking skills every day. And no matter how hard I tried to master the Korean language, there were always people who couldn’t understand me because of my accent. Even if your pronunciation is almost perfect, some people will have a problem understanding you because of your accent. (867) 7 Best Ways to Learn a Language Fast [2020] How to Learn Spanish by Yourself in 9 Simple Steps. Whenever anyone says, “Wow! 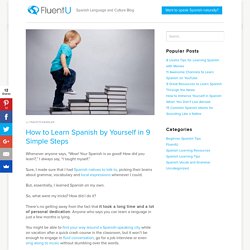 Your Spanish is so good! How did you learn? ,” I always say, “I taught myself.” Sure, I made sure that I had Spanish natives to talk to, picking their brains about grammar, vocabulary and local expressions whenever I could. But, essentially, I learned Spanish on my own. So, what were my tricks? There’s no getting away from the fact that it took a long time and a lot of personal dedication. You might be able to find your way around a Spanish-speaking city while on vacation after a quick crash course in the classroom, but it won’t be enough to engage in fluid conversation, go for a job interview or even sing along to music without stumbling over the words.

The key is to throw yourself into the deep end. I remember crying a lot during the first six months, sometimes even fearing simple tasks, like buying a loaf of bread. Learning a new language in 2020? This app gets you speaking in just 3 weeks. Language novices, newbies, beginners… whatever you like to call yourselves, we at Babbel feel your pain. 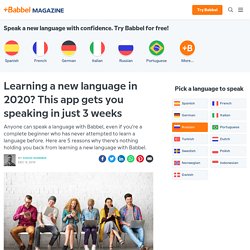 After subpar Spanish classes or mind-numbingly boring French lessons at school, we wouldn’t be surprised if you’d been put off language learning for life. But trust us when we say that the boat has not sailed on your language learning adventures. – We can get you speaking a new language. To put our money where our mouth is, we commissioned a study from researchers from City University of New York (CUNY) and the University of South Carolina to test how much Spanish the Babbel app could teach two groups of complete beginners in just two months.

Then, feeling pretty confident with ourselves, we challenged 15 resident Babbelonians to learn as much Spanish as they could with the app — in just three weeks. The results? (1685) How To Do A British Accent. (1663) Spanish 101: Learn ALL Spanish Fundamentals. (1576) Learn French Pronunciation in 12 Minutes. (1562) 1 Simple Trick to Become Fluent in English - Become a Confident Speaker and Stop Translating. (1447) Learn ALL the Basics in Spanish: Spanish Level 1. (1297) How to Acquire any language NOT learn it! (956) 10 English words that you pronounce INCORRECTLY.