Welcome to the LaraBrain - Creating Sluggable URLs Using the Laravel Framework. Committed to the LaraBrain by: wjgilmore (@wjgilmore) at October 14, 2015 11:04 pm Creating user- and SEO-friendly URLs is easy thanks to the eloquent-sluggable package. 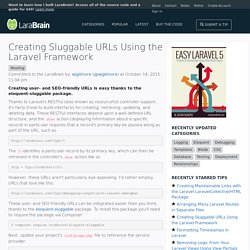 Thanks to Laravel's RESTful (also known as resourceful) controller support, it's fairly trivial to build interfaces for creating, retrieving, updating, and deleting data. These RESTful interfaces depend upon a well-defined URL structure, and the show action (displaying information about a specific record) in particular requires that a record's primary key be passed along as part of the URL, such as: The 3 identifies a particular record by its primary key, which can then be retrieved in the controller's show action like so: $tip = Tip::findOrFail(3); 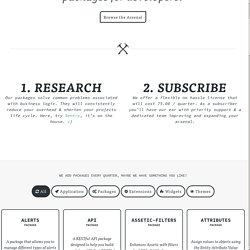 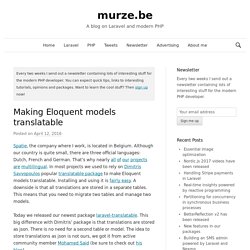 You can expect quick tips, links to interesting tutorials, opinions and packages. Want to learn the cool stuff? Then sign up now! How To Add Multilingual Support to Eloquent. Did you know that several countries throughout the world have more than one official language? For example, my home country Belgium has three; French, Dutch, and German. Most Belgians also speak English. Quick Tip: Get a Homestead Vagrant VM Up and Running. This quick tip will help you get up and running with a brand new Homestead Improved Vagrant VM. to find out about Vagrant and why you should use it, see this post.Homestead Improved is based on Homestead, but has the added benefit of not forcing you to deal with SSH keys, doesn’t get installed globally, is more cross-platform friendly, and comes with a helper script to auto-configure the shared folders.I recommend creating a new Homestead Improved VM for every new project, and this tutorial will follow such a practice. 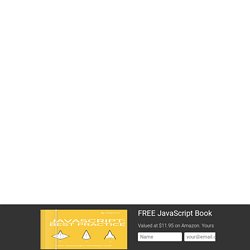 Prerequisites You need: The tutorial assumes you’ll be using a bash-like terminal; Git Bash if on Windows (comes with Git Tools). Getting Started. Packagist. Murze.be - A blog on modern PHP and Laravel. Laravel Packages. Laravel Doctrine - Best of Both Worlds? Laravel Doctrine is a drop-in implementation of the famous ORM for the Laravel 5.X Framework, and a really interesting alternative to the default choice, Eloquent. 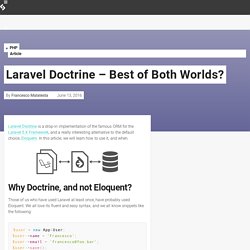 In this article, we will learn how to use it, and when. Why Doctrine, and not Eloquent? Laravel Doctrine - A drop-in Doctrine2 implementation for Laravel 5+ Laravel Collective. Laravel Archives - SitePoint. Laravel 5.2 and Dropzone.js Part 2: Displaying already uploaded images. In first part Laravel 5.2 and Dropzone.js auto image uploads with removal links I talked about basic configuration options and server side functions. 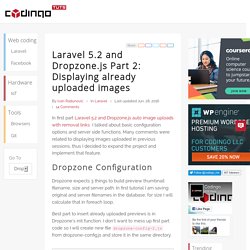 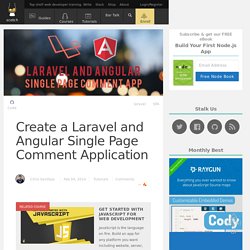 Laravel for the great things it brings to the PHP community and Angular for the amazing frontend tools and its simplicity. Combining these two great frameworks only seems like the logical next step. Create an E-Commerce Website with laravel 5.2. Browsing Most Recent Laravel Tricks. Cartalyst.