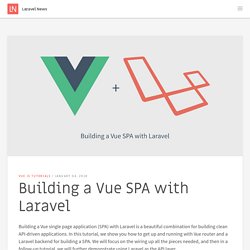 In this tutorial, we show you how to get up and running with Vue router and a Laravel backend for building a SPA. We will focus on the wiring up all the pieces needed, and then in a follow-up tutorial, we will further demonstrate using Laravel as the API layer. The primary flow of how an Vue SPA works with Laravel as a backend is as follows: The first request hits the server-side Laravel routerLaravel renders the SPA layoutSubsequent requests leverage the history.pushState API for URL navigation without a page reload Vue router can be configured to use history mode or the default hash-mode, which uses the URL hash to simulate a full URL so the page won’t reload when the URL changes.

We will use history mode, which means we need to configure a Laravel route that will match all possible URLs depending on which route the user enters the Vue SPA. Installation. How to build a single-page application (SPA) with Vue.js. Table of contents Introduction Single-page applications have many advantages, such as speed, really good UX, and, as for developing for Drupal, the full control over the markup. 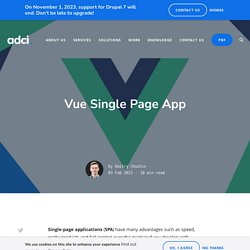 There are more and more sites using SPA; there are more and more tools that simplify the process of developing complex SPA. If you read our articles (if not, then you should do it), you've probably read about a young reactive framework called Vue.js, and how you can use it in Drupal. I suggest you plunge deeper into Vue and consider writing a simple SPA. Server-side In this tutorial, we will only talk about writing a client with Vue. Client-side Tools It is really easy to start using Vue. Vue-cli For jump-starting a new project, I highly recommend Vue-cli. Then initialize project with the chosen template; for this project I used webpack-simple which is rather enough for our purpose. $ vue init webpack-simple vue-spa Then go to the vue-spa folder and run npm install in terminal. Webpack-simple template Step 1. Learn Vue 2: Step By Step: SPAs and the Backend. Learn Vue 2: Step By Step: Vue SPA Essentials: Routing. Build a Single Page Time Tracking App with Vue.js: Introduction.

How To Build A Simple Single Page Application Using Vue 2 (Part 1) Today, we will be learning how to build a single page application using Vue. 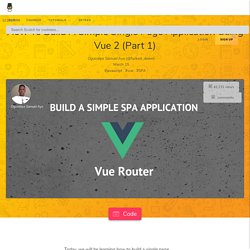 Vue.js is a library for building interactive web interfaces. It provides data-reactive components with a simple and flexible API. For the purpose of this tutorial, the term Vue refers to Vue 2.X versions unless stated otherwise. What We Will Build Let's take a quick view at what we would be building: This tutorial, however, hopes that you do understand: 1.) Getting started with the Vue CLI To get started easily, and also skip the process of configuring webpack for the compilation from ES6 to ES5, we would use the vue cli.

Sudo npm install -g vue-cli After installing the vue-cli, it is now time for us to create a vue project. Note: For the purpose of this tutorial, while running the command below, I chose no when asked for code linting. Code linting would make sure that codes are properly indented, as well as empty spaces are not left. Vue init webpack spa Installing and configuring the Vue router Setting up our routes. Cretueusebiu/laravel-vue-spa: A Laravel-Vue SPA starter project template. Skyronic/vue-spa: Vue 2 Single Page Application Example (vuex + vue-router)