Iliad Book XXII - Achilles Kills Hector. Iliad - Public domain English translation Except for Hector, the Trojans are inside the walls of Troy. 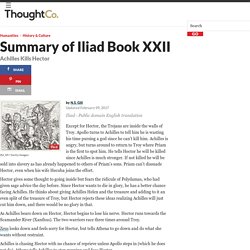 Apollo turns to Achilles to tell him he is wasting his time pursing a god since he can't kill him. Achilles is angry, but turns around to return to Troy where Priam is the first to spot him. He tells Hector he will be killed since Achilles is much stronger. If not killed he will be sold into slavery as has already happened to others of Priam's sons. Hector gives some thought to going inside but fears the ridicule of Polydamas, who had given sage advice the day before. As Achilles bears down on Hector, Hector begins to lose his nerve. Zeus looks down and feels sorry for Hector, but tells Athena to go down and do what she wants without restraint. Achilles is chasing Hector with no chance of reprieve unless Apollo steps in (which he does not do). She adds that she will persuade Hector to do the same. Reasoning. Hector - Wikipedia. Coin from Troy, 177-192 AD. 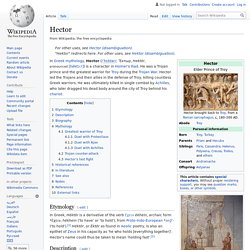 Obverse: Bust of Commodus. Reverse: Hector, brandishing shield and spear, on a two-horse chariot. Inscription EKTΩP (Hektor) above, IΛIEΩN (Ilion meaning Troy) in exergue. The bronze coin struck in 350-300 BC in Ophryneion which was considered to be the site of the Tomb of Hector. Obverse depicts bearded Hector wearing triple crested helmet and reverse depicts infant Dionysos. Etymology[edit] In Greek, Héktōr is a derivative of the verb ἔχειν ékhein, archaic form *ἕχειν hékhein, 'to have' or 'to hold' from Proto-Indo-European *seǵh- 'to hold'.[4] Héktōr, or Éktōr as found in Aeolic poetry, is also an epithet of Zeus in his capacity as 'he who holds [everything together]'. Greek mythology[edit] Greatest warrior of Troy[edit] Hector Admonishes Paris for His Softness and Exhorts Him to Go to War by J.H.W. 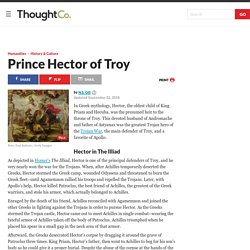 Trojan War - Wikipedia. Whether there is any historical reality behind the Trojan War remains an open question. 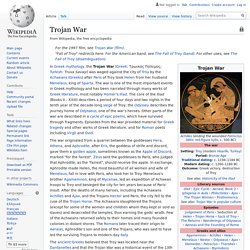 Many scholars believe that there is a historical core to the tale, though this may simply mean that the Homeric stories are a fusion of various tales of sieges and expeditions by Mycenaean Greeks during the Bronze Age. Those who believe that the stories of the Trojan War are derived from a specific historical conflict usually date it to the 12th or 11th centuries BC, often preferring the dates given by Eratosthenes, 1194–1184 BC, which roughly corresponds with archaeological evidence of a catastrophic burning of Troy VIIa.[4] Sources. Paris (mythology) - Wikipedia. Paris’s childhood The Judgment of Paris The goddesses thought to be the most beautiful were Hera, Athena, and Aphrodite, and each one claimed the apple. 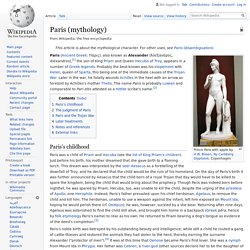 They started a quarrel so they asked Zeus to choose one of them. Laocoön - Wikipedia. Virgil gives Laocoön the famous line "Equō nē crēdite, Teucrī / Quidquid id est, timeō Danaōs et dōna ferentēs", or "Do not trust the Horse, Trojans / Whatever it is, I fear the Greeks even bearing gifts. 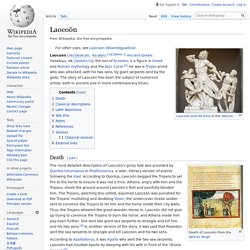 " This line is the source of the saying: "Beware of Greeks bearing gifts. " In Sophocles, however, he was a priest of Apollo, who should have been celibate but had married. The serpents killed only the two sons, leaving Laocoön himself alive to suffer.[5] In other versions he was killed for having committed an impiety by making love with his wife in the presence of a cult image in a sanctuary,[6] or simply making a sacrifice in the temple with his wife present.[7] In this second group of versions, the snakes were sent by Poseidon[8] and in the first by Poseidon and Athena, or Apollo, and the deaths were interpreted by the Trojans as proof that the horse was a sacred object.

The two versions have rather different morals: Laocoön was either punished for doing wrong, or for being right.[9] Laocoon. The Trojan War in Ares (Mars) Trojan War. The Trojan War is probably one of the most important events that have been narrated in Greek mythology. 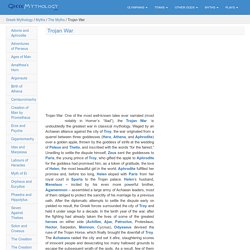 It was a war that broke out between the Achaeans (the Greeks) and the city of Troy. The best known narration of this event is the epic poem Iliad, written by Homer. Zeus believed that the number of humans populating the Earth was too high and decided it was time to decrease it. Moreover, as he had various affairs with mortal women and fathered demigod children, he thought it would be good to get rid of them. He formed a plan after he learned of two prophecies; one of them said that he would be dethroned by one of his sons, just like he had done with his own father, Cronus; the other prophecy mentioned that the sea nymph Thetis, for whom Zeus had fallen, would give birth to a son that would surpass his father in glory. ARES - Greek God of War & Battlelust (Roman Mars) Laocoon. Paris. Hector. Ares (God)