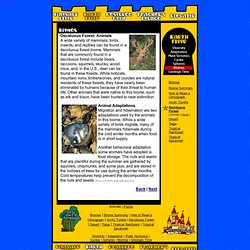 Mammals that are commonly found in a deciduous forest include bears, raccoons, squirrels, skunks, wood mice, and, in the U.S., deer can be found in these forests. While bobcats, mountain lions, timberwolves, and coyotes are natural residents of these forests, they have nearly been eliminated by humans because of their threat to human life. Other animals that were native to this biome, such as elk and bison, have been hunted to near extinction. Animal Adaptations Migration and hibernation are two adaptations used by the animals in this biome. While a wide variety of birds migrate, many of the mammals hibernate during the cold winter months when food is in short supply. Another behavioral adaptation some animals have adopted is food storage. Back | Next. Here are some examples of animals in a Deciduous Forest Biome. Bambi - Friends Like Us. Birdwatching Dot Com - About Wild Birds and Birding. Forest Animals. Plants. Old Growth Forests. 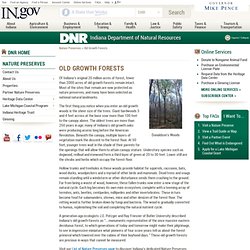 Most of the sites that remain are now protected as nature preserves, and many have been selected as national natural landmarks. The first thing you notice when you enter an old growth woods is the sheer size of the trees. Giant hardwoods 3 and 4 feet across at the base soar more than 100 feet to the canopy above. The oldest trees are more than 250 years in age; many of Indiana's old growth oaks were producing acorns long before the American Revolution. Hollow trunks and treeholes in these woods provide habitat for squirrels, raccoons, bats, wood ducks, woodpeckers and a myriad of other birds and mammals. A generation ago ecologists J.E. Visit our List of Nature Preserves page to discover Indiana's dedicated Nature Preserves protecting old growth forest communities. Bendix Woods Nature Preserve - (St. Inch In A Pinch Deciduous Forest Plants. Deciduous Trees. Andy's northern Ontario wildflower site - plants in a deciduous forest. For more information email: andy@ontariowildflower.com Page last updated on: January 5, 2011 Website created by Andy Fyon URL: © 1999-2011 Andy Fyon. 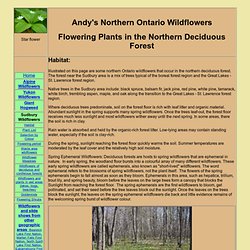 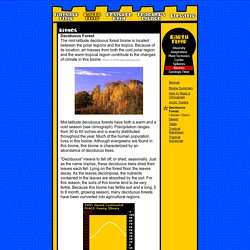 Because of its location, air masses from both the cold polar region and the warm tropical region contribute to the changes of climate in this biome. Photo © 2000-www.arttoday.com Mid-latitude deciduous forests have both a warm and a cold season (see climograph). Precipitation ranges from 30 to 60 inches and is evenly distributed throughout the year. Much of the human population lives in this biome. "Deciduous" means to fall off, or shed, seasonally. Back | Next. Hunting wild animals is a major sport in the Deciduous Forest Biome. Eastern deciduous forest. Description Range Biodiversity Threats Conservation Find out more Glossary References The great eastern deciduous forest of North America was once an unbroken swathe of imposing trees that stretched from northern New England to central Florida, and west to the Mississippi River (1) . 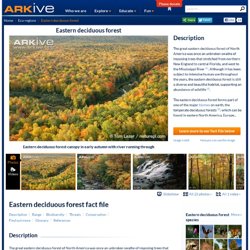 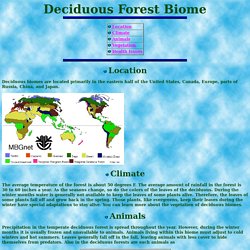