Twitter. Engaging Games for Composing and Decomposing Numbers. After spending several weeks exploring number bonds, this week I’ve been working with my firsties on composing and decomposing 5. 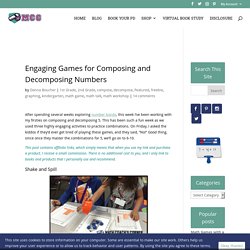 This has been such a fun week as we used three highly engaging activities to practice combinations. On Friday, I asked the kiddos if they’d ever get tired of playing these games, and they said, “No!” Good thing, since once they master the combinations for 5, we’ll go on to 6-10. Math Games – building a foundation for mathematical reasoning. In 2001, the National Research Council, in their report Adding it up: Helping children learn mathematics, sought to address a concern expressed by many Americans: that too few students in our schools are successfully acquiring the mathematical knowledge, skill, and confidence they need to use the mathematics they have learned.Developing Mathematical ProficiencyThe potential of different types of tasks for student learning, 2017. 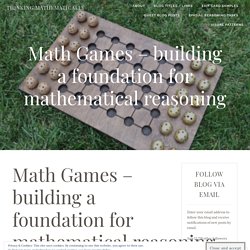 What’s your favourite maths game? – Primary Learning. I think I was also lucky enough to have a family who enjoyed (and had the time) to play games. 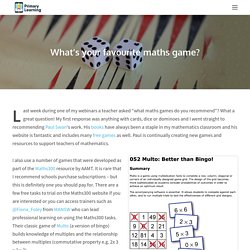 At the time I didn’t really consider the mathematics behind most of them but they were powerful for building mental computation strategies, critical thinking and strategy. Even games such as Snap, Memory, Scrabble, Bingo, Connect 4, Checkers, Backgammon, Mahjong, and of course Yahtzee, have elements that require mathematical thinking. Math Technology Greatest Hits. Twitter. How 3 Techniques From Cognitive Psychology Reinvigorated My Math Classroom. If a college baseball coach wants to improve the hitting average of his team, what should he do in batting practice? 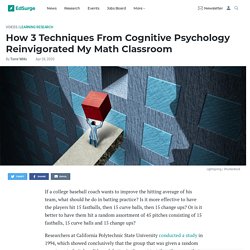 Is it more effective to have the players hit 15 fastballs, then 15 curve balls, then 15 change ups? Or is it better to have them hit a random assortment of 45 pitches consisting of 15 fastballs, 15 curve balls and 15 change ups? Researchers at California Polytechnic State University conducted a study in 1994, which showed conclusively that the group that was given a random assortment of pitches did much better in the post test than the group that received blocked pitches—several of one kind followed by several of another—and the control group.

Here’s the rub: the group that received the random assortment of pitches did not feel like they had improved. Even when they were presented with the data to show the improvement, they still wanted to do more of the blocked practice. Cognitive psychologists call this anomaly desirable difficulty. The problem? CRA for Composing and Decomposing Numbers. Okay, I’m having trouble finding different ways to say “composing and decomposing numbers” in my post titles! But seriously, it’s just THAT important, so I keep writing about it. Our Kinders and Firsties should be doing these types of activities extensively, so it’s important to find lots of different ways to approach the skill. Today I present Clothespin Count. Students use strips that have dots showing 5 (pictured below) through 10. Choose the number that your kiddos need to work on.

Like the number cards shown in the pictures? "I Like This Game Because You Have to Think Hard." A Monday afternoon, working with one of my second graders, helping him fill in a blank hundreds grid. 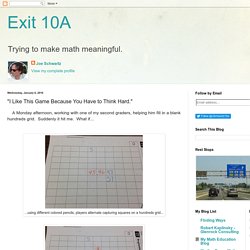 Suddenly it hit me. What if... Mrs.DabelRoom30 sur Twitter : "Thanks @mburnsmath for a fun math game - even in 5th grade. You could see the wheels start to turn as the game progressed. They made changes after the first round and the second was a lot quicker! @CUSDK8 @MeyerholzE Two Dic. Mrs. Unsworth sur Twitter : "Today’s Math Challenge - Race to 100 (using Cuisenaire Rods & tray) Great excitement... ➡️(when close to the end of row) chanting the number they need ➡️”No problem, I can break apart that #!” ➡️(reading the tray, knowing how. Margie Pearse sur Twitter : "Just made this for Grade 5 unit on multiplication of fractions. I wanted to build reasoning into the game. Students decide where they will place each number they roll in order to make the greatest product. #iteachmath #mtbos # Math Card Games That Will Help Students Practice Their Skills. Gather up your playing cards, because we’re about to deal you in on one of our favorite ways to get kids to enjoy math! 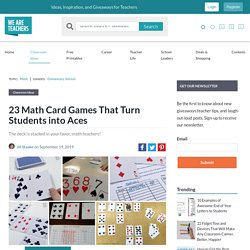 Math card games require no prep time and only a few simple supplies. Use them to practice skills from basic counting all the way up to fractions and order of operations. These games are a sure bet! 1. Fly on the Math Teacher's Wall: Back to School Math Game Hacks. Every couple of months, I get together with a group of amazing math bloggers for the Fly on the Math Teacher’s Wall blog hop. 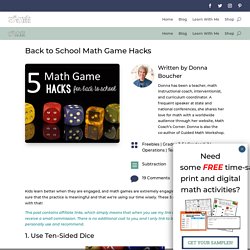 Usually, we are *squashing* math misconceptions, but this time around we’re passing along some *buzzworthy* ideas for back to school. At each stop along the way, you’ll find not only great tips, but also a freebie or two. Enjoying a math webinar while preparing for Thanksgiving Dinner. New way to use a 10 frame to incorporate multiplication! ⁦@ramteach⁩ ⁦@BuildMathMinds⁩… Duane habecker sur Twitter : "Build fluency through games! I have used these booklets of games for years, but today I had a hard time finding the PDFs on the internet, so I did something about it. Here they are...

Even if they say they don't like doing math, they secretly do. An Experiment you should try. - Sara VanDerWerf. UPDATE AUGUST 2019: The great people at Brilliant.org contacted me about this post and connected me to the great new puzzles they create every summer in the 100 Day Challenge and also to link to printouts. 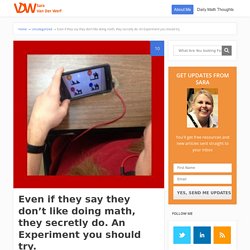 Such great stuff. Check out the links in the sentence before! A Mathemagician's Game for Making Ten. One of My Favorite Games: Number Boxes – Embrace the Challenge. This game is part of my “simple but high leverage” collection of games that are flexible, engaging, and easy to prep. 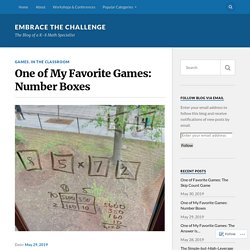 Others include The Answer Is… and the Skip Count Game. I have always assumed everyone else played this game. Kindergarten Yahtzee! Ten More/Ten Less Game. This game for practicing ten more/ten less comes from the wonderful book, Common Core Math in Action (K-2), by Catherine Jones Kuhns and Marrie Lasater. Rainbow Activities - Planning Playtime. Freebie for Composing and Decomposing Numbers.

My firsties are working on composing and decomposing numbers, specifically the number 5, and today we played a tried and true game, Under a Rock. 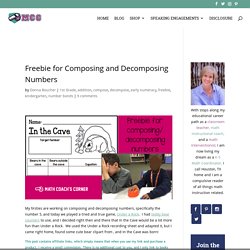 I had teddy bear counters to use, and I decided right then and there that In the Cave would be a lot more fun than Under a Rock. We used the Under a Rock recording sheet and adapted it, but I came right home, found some cute bear clipart from , and In the Cave was born! This post contains affiliate links, which simply means that when you use my link and purchase a product, I receive a small commission.

There is no additional cost to you, and I only link to books and products that I personally recommend. Here’s the lowdown. Math Games with a Pair of Dice. Math Flips – Math Visuals. Math Flips are flashcards with a problem on the front and a similar problem on the back (instead of a problem and an answer) to encourage relational thinking rather than answer-getting. Math Flips routine: Look at side A: How many? How do you know? Look at side B: How many NOW?

Counting With Your Eyes: The Importance of Subitizing For Developing Math Understanding. Have you ever looked at a group of items and just knew how many there were without actually counting? This ability to “see” how many items are in a group without counting is called subitizing. The ability to subitize is an important part of developing a strong mathematical foundation and understanding of number (Baroody 1987, 115). Playing with dice, dominoes, and asking children to find a specific number of items will help them develop subitizing skills and a sense of quantity. Asking to guess how many items you are holding will help develop estimation skills, which is another very important skill that will help children develop their mathematical skills. Counting With Your Eyes: Look At The Dots. Connecting Representations - Elementary Examples. Changing Numbers. Bored Math Students? Get Practice Off the Page! I was the type of student teachers want – hard working, teacher-pleasing, bright.