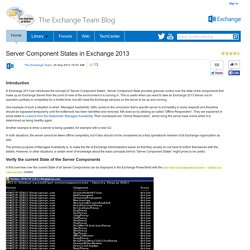 Server Component State provides granular control over the state of the components that make up an Exchange Server from the point of view of the environment it is running in. This is useful when you want to take an Exchange 2013 Server out of operation partially or completely for a limited time, but still need the Exchange services on the server to be up and running. One example of such a situation is when “Managed Availability” (MA) comes to the conclusion that a specific server is not healthy in some respects and therefore should be bypassed temporarily until the bottleneck has been identified and removed. MA does so by utilizing so-called “Offline Responders”. Another example is when a server is being updated, for example with a new CU. Verify the current State of the Server Components About States and Requesters Usually, Server Components are in one of two States: “Active” or “Inactive”. 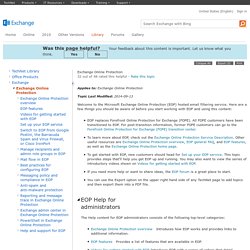 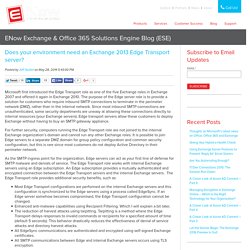 The purpose of the Edge server role is to provide a solution for customers who require inbound SMTP connections to terminate in the perimeter network (DMZ), rather than in the internal network. Since most inbound SMTP connections are unauthenticated, some security departments are uneasy at allowing these connections directly to internal resources (your Exchange servers). Edge transport servers allow these customers to deploy Exchange without having to buy an SMTP gateway appliance. For further security, computers running the Edge Transport role are not joined to the internal Exchange organization’s domain and cannot run any other Exchange roles. As the SMTP ingress point for the organization, Edge servers can act as your first line of defense for SMTP malware and denials of service. Does your environment need an Exchange 2013 Edge Transport server? Part 1: Reverse Proxy for Exchange Server 2013 using IIS ARR - Exchange Team Blog.

For a long time, ForeFront TMG (and ISA before it) has been the go-to Microsoft reverse proxy solution for many applications, including Exchange Server. 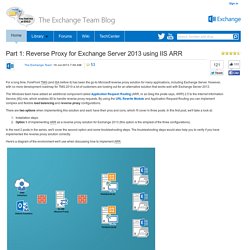 However, with no more development roadmap for TMG 2010 a lot of customers are looking out for an alternative solution that works well with Exchange Server 2013. The Windows team have added an additional component called Application Request Routing (ARR, or as Greg the pirate says, ARR!) 2.5 to the Internet Information Service (IIS) role, which enables IIS to handle reverse proxy requests. By using the URL Rewrite Module and Application Request Routing you can implement complex and flexible load balancing and reverse proxy configurations. There are two options when implementing this solution and each have their pros and cons, which I'll cover in three posts. Installation steps.Option 1 of implementing ARR as a reverse proxy solution for Exchange 2013 (this option is the simplest of the three configurations). Prerequisites Installing ARR 1.

Lessons from the Datacenter: Managed Availability - Exchange Team Blog. Monitoring is a key component for any successful deployment of Exchange. 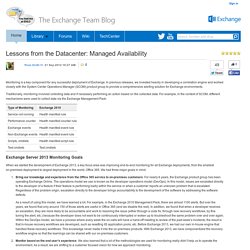 In previous releases, we invested heavily in developing a correlation engine and worked closely with the System Center Operations Manager (SCOM) product group to provide a comprehensive alerting solution for Exchange environments. Traditionally, monitoring involved collecting data and if necessary performing an action based on the collected data. For example, in the context of SCOM, different mechanisms were used to collect data via the Exchange Management Pack: Part 1: Reverse Proxy for Exchange Server 2013 using IIS ARR - Exchange Team Blog. Restoring a Mailbox from an Exchange Server 2013 Recovery Database. How Anonymous Relay works in Exchange 2013.

This article is to provide you, the reader, the knowledge on how to properly create an Exchange 2013 Relay Connector. 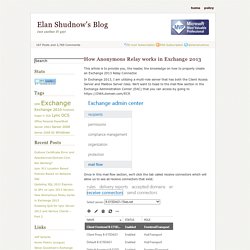 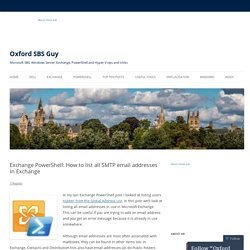 In this post we’ll look at listing all email addresses in use in Microsoft Exchange. This can be useful if you are trying to add an email address and you get an error message because it is already in use somewhere. Although email addresses are most often associated with mailboxes, they can be found in other items too. In Exchange, Contacts and Distribution lists also have email addresses (as do Public Folders which we’ll look at another time). For that reason we can’t use Get-Mailbox which we used in the last post as that will limit our search to mailboxes only, instead we’ll be using Get-Recipient.

If you pipe Get-Recipient into Get-Member you will see an EmailAddresses property which is exactly what we are after. The command is: Get-Recipient | GM Based on what we learnt in the last post we can start off with the command: Get-Recipient | Select Name, EmailAddresses Get-Help Select -Full 1. 2. Microsoft Exchange Server News - Tips - Tutorials. Prevent open relays on Exchange Server. Open relays on corporate networks are a contributing factor to the volume of unsolicited e-mail currently flying around the Internet&mdash;and the presence of such relays is often unbeknownst to the owners of those networks. 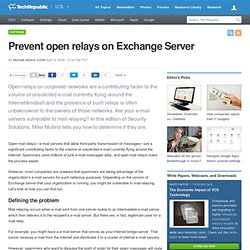 Are your e-mail servers vulnerable to mail relaying? In this edition of Security Solutions, Mike Mullins tells you how to determine if they are. Open mail relays—e-mail servers that allow third-party transmission of messages—are a significant contributing factor to the volume of unsolicited e-mail currently flying around the Internet. Spammers send millions of junk e-mail messages daily, and open mail relays make the process easier.

However, most companies are unaware that spammers are taking advantage of the organization's e-mail servers for such nefarious purposes. Defining the problem. MX Lookup Tool - Check your DNS MX Records online - MxToolbox.