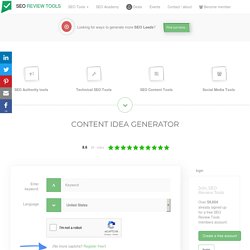 Writing compelling and engaging content on a daily basis can be challenging. Especially when the topic you have to writ about, is kind of boring. To help you to come up with new content ideas related to your topic, I’ve created the Content Idea Generator. Just enter your subject and this tool generates a list of approximately 100 headlines based on what is hot and trending in Google search and Social Media. After generating the results you can export the full list or extract a custom selection. Blockchain FORBES. Home – Science Huβ Publishing. Untitled document. The Hanson-Yudkowsky AI-Foom Debate - Lesswrongwiki. In late 2008, an extensive and long-awaited debate about the Technological Singularity occurred on Overcoming Bias, mainly between Robin Hanson and Eliezer Yudkowsky. 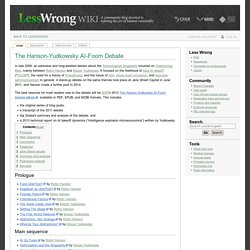 It focused on the likelihood of hard AI takeoff ("FOOM"), the need for a theory of Friendliness, and the future of AGI, whole brain emulation, and recursive self-improvement in general. A stand-up debate on the same themes took place at Jane Street Capital in June 2011, and Hanson made a further post in 2014. The best resource for most readers new to the debate will be MIRI's 2013 The Hanson-Yudkowsky AI-Foom Debate eBook, available in PDF, EPUB, and MOBI formats. This includes the original series of blog posts,a transcript of the 2011 debateKaj Sotala's summary and analysis of the debate, anda 2013 technical report on AI takeoff dynamics (“intelligence explosion microeconomics”) written by Yudkowsky. Prologue Main sequence Conclusion Postscript Jane Street debate Summary and analysis. Are Computers Already Smarter Than Humans? 68 Terms Related to Unversed. What is FUD (Fear, Uncertainty, and Doubt)? - Definition from WhatIs.com. Why is it so bad to shoot up meth into varicose veins in your leg? 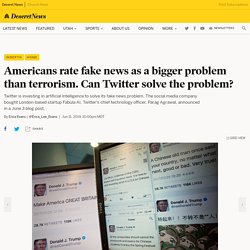 Now, Twitter is turning to artificial intelligence to help solve the problem. The social media company bought Fabula AI, a London-based startup that uses artificial intelligence to automatically detect fake news, Twitter's chief technology officer, Parag Agrawal, announced in a June 3 blog post. The financial terms of the deal between Twitter and Fabula have not been disclosed. "This strategic investment ... will be a key driver as we work to help people feel safe on Twitter and help them see relevant information," Agrawal wrote. The acquisition comes at a time when fake news and disinformation are frequently being deployed as weapons in political warfare.

But identifying fake news can be tricky, even for humans. Fabula, however, has taken a different approach, one that Agrawal calls "novel. " Fabula AI. Fabula AI is a Twitter-owned[1][2] London-based fake-news detection Deep Learning company founded in April 2018 by Michael Bronstein, Federico Monti, Ernesto Schmitt and Damon Mannion.[3][4] Early History[edit] Leadership[edit] Michael Bronstein, Ernesto Schmitt, Federico Monti and Damon Mannion co-founded Fabula on 20 April 2018.[5][6] The company raising an undisclosed sum from various individual angel investors.[7] Bronstein is chair in machine learning & pattern recognition at Imperial College, London[8] and began Fabula in collaboration with Monti while at the University of Lugano, Switzerland, where Monti was doing his PHD. 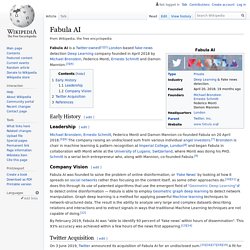 Editor Counter - WordCounter.net. Many people assume good writing is found when you write. 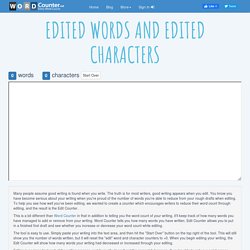 The truth is for most writers, good writing appears when you edit. You know you have become serious about your writing when you're proud of the number of words you're able to reduce from your rough drafts when editing. To help you see how well you've been editing, we wanted to create a counter which encourages writers to reduce their word count through editing, and the result is the Edit Counter. This is a bit different than Word Counter in that in addition to telling you the word count of your writing, it'll keep track of how many words you have managed to add or remove from your writing. Word Counter tells you how many words you have written.

The tool is easy to use. Editing is an important part of the writing process, and it usually doesn't get the respect it deserves. Does human body absorb water through skin? – Home. Online tsp free website directory editor. Add line breaks - Line tools. Add line breaks where there are none by following these steps. 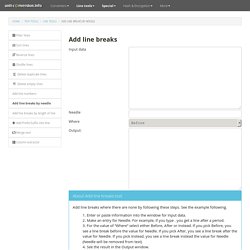 See the example following. 1. Enter or paste information into the window for Input data.2. Make an entry for Needle. For example, if you type . you get a line after a period.3. Here is an example for a Needle value of . and Where value After.