Grandmaster Flash breaks down Netflix's new series "The Get Down." "I was reckless with records. 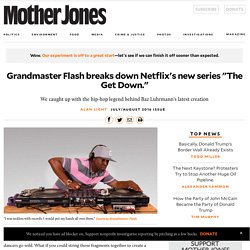 I would put my hands all over them. " Courtesy Grandmaster Flash As a music-obsessed teen growing up in the Bronx in the 1970s, Joseph Saddler noticed that every party song had one drum break or keyboard solo that made dancers go wild. What if you could string those fragments together to create a nonstop frenzy? "A call and an email came in. So Saddler, an electronics student at Samuel Gompers Vocational High School, set about transforming the humble turntable into an instrument. Now Flash is revisiting those seminal days as an associate producer on The Get Down, a new Netflix drama set in '70s-era New York. Alan Light: So how did you and Baz Luhrmann connect? Grandmaster Flash: A call and an email came into the office. The first rap record came out in '79, but hip-hop began in '69. AL: Has looking back on all of this changed your perspective on the birth of hip-hop?

GF: Hip-hop has always been chronologically misunderstood. Guy Paints Over Shit Graffiti And Makes It Legible » Design You Trust. Design, Culture & Society. Wild Style - Subway Theme. Best Rap/Hip Hop Songs of the '80's. Bronx River Throw Down: Hip-Hop History. Rich and poor: Will the inequality gap ever be bridged? Four Documentaries That Capture the Globalization of Street Art. Konair painting from Las Calles Hablan (2013) (Courtesy Onist Film and the filmmakers) As an ever-increasing amount of street art documentaries appear online, along with pleas for Kickstarter donations to prospective films, I, a longtime street art enthusiast, find it near impossible and entirely overwhelming to try to watch all of these films. 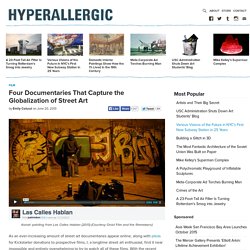 With the recent release of yet another street art documentary, Las Calles Hablan (2013), I took a look at four fascinating films documenting the global street art movement, with the hope of easing the decision-making process for wishy-washy observers like me. Despite the divergent focus of each film — ranging from covering street art in one city to globally — important similarities between the films and their featured artists unquestionably emerge. 1. Las Calles Hablan (2013) The Wonderfully Dismal Kingdom of Banksy. Posted on August 26, 2015 Banksy has ventured into the entertaining resort business. 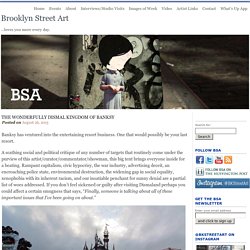 One that would possibly be your last resort. A scathing social and political critique of any number of targets that routinely come under the purview of this artist/curator/commentator/showman, this big tent brings everyone inside for a beating. Rampant capitalism, civic hypocrisy, the war industry, advertising deceit, an encroaching police state, environmental destruction, the widening gap in social equality, xenophobia with its inherent racism, and our insatiable penchant for sunny denial are a partial list of woes addressed. If you don’t feel sickened or guilty after visiting Dismaland perhaps you could affect a certain smugness that says, “Finally, someone is talking about all of these important issues that I’ve been going on about.”

Banksy. Freedom Media Ethics (@FreedomEthics) Evoking Memories: Communicating via Memory in Design. By Angela Riechers Memory is a powerful communicative device, and many designers struggle to decide when to employ it. 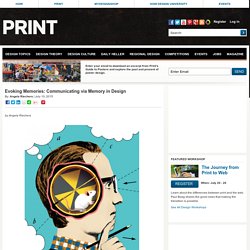 These historical examples illuminate why and when it works. The deeply felt human need to preserve memories presents a curious conundrum to the graphic designer. People have an innate longing to mark the passage of time, to bear witness as the moments and years slide past, and to record for future recall the singular events of their own lives. We strive to keep tabs on the collective culture and its history, a running tally of the day-to-day. The designer’s mission, simply put, is to solve the problem in a way that will deliver a message effectively and clearly to the intended audience. An art, design, and visual culture blog.

Gaming related. Street Art related. Assorted Cool Stuff. Images of the Week 01.08.12 Miami Special Part II. Posted on January 8, 2012 Here is the 2nd half of the Miami images we captured for you from the massive blocks long street installation party called Art Basel this year. 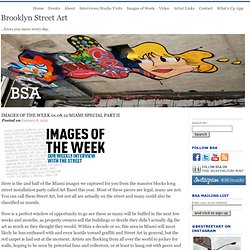 Most of these pieces are legal, many are not. You can call them Street Art, but not all are actually on the street and many could also be classified as murals. Now is a perfect window of opportunity to go see these as many will be buffed in the next few weeks and months, as property owners sell the buildings or decide they didn’t actually dig the art as much as they thought they would. Within a decade or so, this area in Miami will most likely be less enthused with and even hostile toward graffiti and Street Art in general, but the red carpet is laid out at the moment.