The Most Underrated Scotch Whiskies, According To Bartenders. When it comes to Scotch whisky, there are a few names even the most novice drinkers know well. 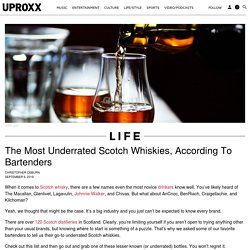 You’ve likely heard of The Macallan, Glenlivet, Lagavulin, Johnnie Walker, and Chivas. But what about AnCnoc, BenRiach, Craigellachie, and Kilchoman? Yeah, we thought that might be the case. It’s a big industry and you just can’t be expected to know every brand. There are over 120 Scotch distilleries in Scotland. Check out this list and then go out and grab one of these lesser-known (or underrated) bottles. Monkey Shoulder Josh Cameron, head bartender at Boulton & Watt in New York City Monkey Shoulder does not get enough love. The Most Underrated Scotch Whiskies, According To Bartenders. Penny University (@pennyuniversityroasters) Penny University (@pennyuniversityroasters) This Romantic Wine Bar In Limerick Is A True Hidden Gem.

You'll feel like you're in Barcelona Limerick city probably isn't the first thing you think of when you hear the words "romantic wine bar" but your mind is about to get changed. 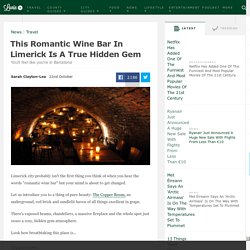 Let us introduce you to a thing of pure beauty: The Copper Room, an underground, red brick and candlelit haven of all things excellent in grape. There's exposed beams, chandeliers, a massive fireplace and the whole spot just oozes a cosy, hidden gem atmosphere. Look how breathtaking this place is... Apart from having a wonderful selection of wines to suit all budgets, from red to white to everything in between, this is also a fab little place for a nibble. And by nibble we mean stuffing yourself like a fattened goose on their yummy meat and cheese boards. The Copper Room have set meat and cheese boards, or you can even go wild and mix 'n' match your own. They even have a paté platter. Belgian Hot Chocolate Recipe - David Lebovitz. Some recipes I make over and over again, and some I don’t. 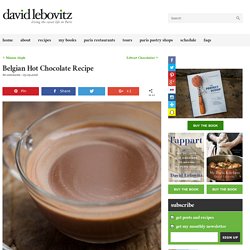 I’m not sure why, but once a recipe becomes part of my repertoire, I tend to stick with it. However as a diversion from my usual Parisian hot chocolate recipe, I revisited this one, which I learned to make in Belgium. I’d forgotten how good it was! I made this hot chocolate recipe when I did an internship at Wittamer, one of the best chocolate shops in Brussels. And let me tell you, there’s plenty of competition in that town. The head chocolatier, Michael Lewis gave me this recipe, which they serve in their chic tea salon overlooking the place Sablon.

This Japanese Way of Making Iced Coffee Is a Game Changer. Cold-brew coffee is a hot hot trend, and you can DIY. Tutorial: How to photograph wine on clear plexiglass: Digital Photography Review. Photographer Dustin Dolby of the YouTube channel workphlo is used to doing a lot with a little. 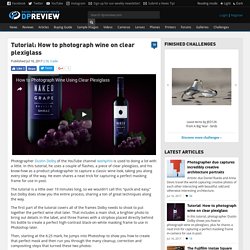 In this tutorial, he uses a couple of flashes, a piece of clear plexiglass, and his know-how as a product photographer to capture a classic wine look, taking you along every step of the way. He even shares a neat trick for capturing a perfect masking frame for use in post. The tutorial is a little over 19 minutes long, so we wouldn't call this "quick and easy," but Dolby does show you the entire process, sharing a ton of great techniques along the way. The first part of the tutorial covers all of the frames Dolby needs to shoot to put together the perfect wine shot later. How to Make Cold Brew Coffee at Home. Last summer was my first summer in New York. 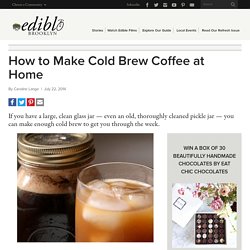 I was paying too much for half of a sublet bedroom in a crummy Craigslist apartment without air conditioning, and I was drinking a lot of cold brew coffee — so much, in fact, that I was trying to justify how much money I was spending on iced coffee by how much money I was saving by not having air conditioning. How to Make Crema with the Aeropress. One of the main qualities of espresso is the creamy foam called crema which is produced when espresso is brewed. 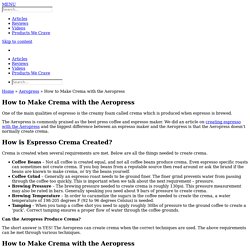 The Aeropress is commonly praised as the best press coffee and espresso maker. We did an article on creating espresso with the Aeropress and the biggest difference between an espresso maker and the Aeropress is that the Aeropress doesn’t normally create crema. How is Espresso Crema Created? Crema is created when several requirements are met. Below are all the things needed to create crema. Tips & Tricks: This is not a Latte. Aeropress. World AeroPress Championship. Step aside, barista: how to make a decent cup of coffee at home. Most of us are lazy when it comes to making good coffee at home, not weighing our beans and water, grinding the beans or timing the extraction. 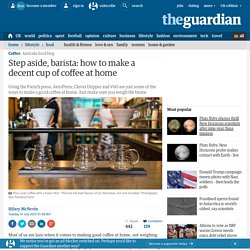 That’s why we drink coffee out. But classes are springing up in Melbourne and Sydney, teaching mere mortals how to be baristas at home. Nolan Hirte, owner of inner-city Melbourne cafes Proud Mary, Stagger Lees and Aunty Peg’s, admits not everyone wants to do all that, but if people knew how easy it was to make it properly at home, “your coffee would be so much better.” In his most recently opened cafe, Aunty Peg’s in Collingwood, Hirte has set up what he calls the Genius Bar.