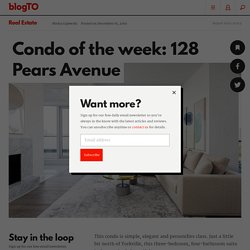 Just a little bit north of Yorkville, this three-bedroom, four-bathroom suite is devastatingly beautiful. When you walk into the space it's open and airy. The huge floor-to-ceiling windows let lots of natural light in and the light marble floorings make the place feel heavenly. Everything is modern and refined – especially the kitchen with the sleek integrated cabinetry. The kitchen isn't the biggest room in the home so it might not be the best if you're an avid cook. The master bedroom is spacious and complete with a walk-in closet and a five-piece en suite bathroom. The other two bedrooms are also well proportioned and each come with their own en suite bathroom. As for outdoor space, there's over 400-square-feet of terrace space that overlook the city.

Specs Address: #1002 – 128 Pears Ave. Good For City views. Move On If You don't want to be overpaying for square footage. Nearly 100 units hit the market in one Yorkville condo. Months into the COVID-19 pandemic that has wreaked havoc on the short-term rental industry, one Yorkville building provides a snapshot into the city’s current downtown rental market. 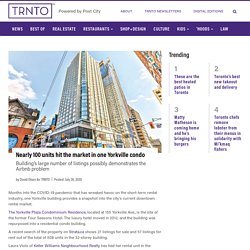 The Yorkville Plaza Condominium Residence, located at 155 Yorkville Ave., is the site of the former Four Seasons Hotel. The luxury hotel moved in 2012, and the building was repurposed into a residential condo building. A recent search of the property on Strata.ca shows 27 listings for sale and 57 listings for rent out of the total of 508 units in the 32-storey building. Laura Violo of Keller Williams Neighbourhood Realty has had her rental unit in the building on the market for more than 70 days. Naruto: 10 Things That Happened To The Main Characters Between Shippuden & Boruto. At the conclusion of Naruto Shippuden, the audience is treated to a flash-forward where a new character, Boruto, is shown acting almost identically to how Naruto did in the very first episode of the series, defacing the Hokage faces in the Hidden Leaf Village. 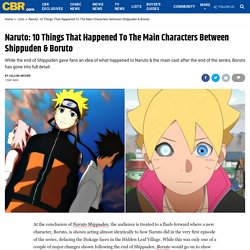 While this was only one of a couple of major changes shown following the end of Shippuden, Boruto would go on to show many more. Related: Naruto: 5 Bleach Characters Sakura Can Beat (& 5 She Stands No Chance Against) As many years passed since Sasuke and Naruto's climactic battle, it's understandable many things in the ninja world changed between Naruto's and Boruto's stories.

While some changes were expected progressions of character's stories, others weren't as foreshadowed and were a surprise to the audience who followed the series from the beginning. 10 Expansion Of The Hidden Leaf Village 9 Technological Advancements 8 Everyone Gets Married Related: Boruto: 5 Ways It Hasn't Lived Up To Naruto (& 5 Ways It's Surpassed Expectations) Try Flow, download & listen to free music. 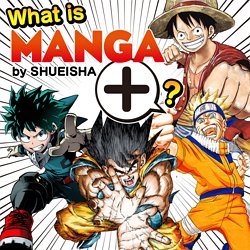 Many heroes have been born from Japanese manga. Upon the release of the latest episode, Japanese manga readers have gotten excited about the latest performance of their heroes and have been able to share their experiences with friends and colleagues. If you too want to get excited over manga heroes’ great performances with other readers all over the world, “MANGA Plus by SHUEISHA” is the best place for you. With this service, you can read a many attractive manga series “Anywhere in the World”, “in English and Spanish”, and “Totally Free of Charge”. There is no time lag either. “MANGA Plus by SHUEISHA” is under the direct control of SHUEISHA, a Japanese publisher that has been creating manga directly with the artists.