DEEPSEA CHALLENGE – National Geographic Explorer James Cameron’s Expedition. James Cameron Explores the Deep Blue Sea. James Cameron set a record for the deepest dive in a submersible by himself as in solo. 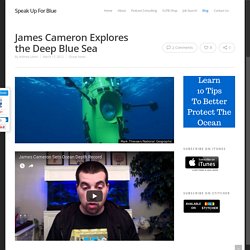 He set the record on Tuesday off the coast of Papa New Guinea where he dove down 5.1 miles below the Ocean’s Surface. The record setting journey was actually a test run for a longer journey he plans to take, which is a trip down to the Mariana Trench in a couple of weeks. The Mariana trench is located in the Pacific Ocean south of Japan and is approximately 6.8 miles deep and stretch over 1500 miles long. Cameron has really gotten in to exploring the deep sea ever since he made the Titanic documentary, which forced him to research how to reach the giant ship located at a depth of 2.5 miles. In fact, James Cameron has become such an expert that the US government actually contacted him during the BP oil spill in the Gulf of Mexico to discuss the type of technology required to function at the deep depth to stop the spill.

Do you think Hollywood stars and directors help the Ocean Conservation Movement? James Cameron's first footage from the deep sea floor. Cameron's Long Way Down: Mariana Trench. Deep-sea scientists cheer Cameron's dive - Technology & science - Science - OurAmazingPlanet. James Cameron's record-setting dive to Earth's deepest spot has sparked a wave of excitement among many in the science community, who are not only heralding the new technology produced by the Hollywood veteran but lauding the renewed focus the project has put on the deep ocean. 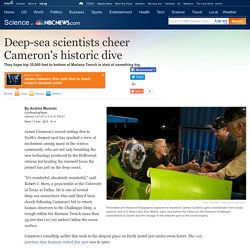 "It's wonderful, absolutely wonderful," said Robert J. Stern, a geoscientist at the University of Texas at Dallas. He is one of several deep-sea researchers who said they'd been closely following Cameron's bid to return human observers to the Challenger Deep, a trough within the Mariana Trench more than 35,000 feet (10,700 meters) below the ocean surface. Cameron's roundtrip earlier this week to the deepest place on Earth lasted just under seven hours. The only previous time humans visited this spot was in 1960. News of Cameron's successful solo dive "gave me goose bumps," said Cindy Lee Van Dover, director of the marine laboratory at Duke University's Nicholas School of the Environment. Sub Sphere: What Protects Human Deep Divers? Journey to the Deep with James Cameron - Nierenberg Prize 2013.

Cameron dive stirs call for more exploration - Technology & science - Science - OurAmazingPlanet. James Cameron's record-breaking dive to the bottom of the Mariana Trench has received accolades from many quarters, and perhaps none are louder than those who might one day actually use the technology the filmmaker and explorer developed to plunge to the Earth's deepest place. 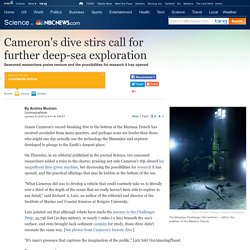 On Thursday, in an editorial published in the journal Science, two seasoned researchers added a voice to the chorus, praising not only Cameron's trip aboard his magnificent lime-green machine, but discussing the possibilities for research it has opened, and the practical offerings that may lie hidden at the bottom of the sea. "What Cameron did was to develop a vehicle that could routinely take us to literally over a third of the depth of the ocean that we really haven't been able to explore in any detail," said Richard A.

Lutz, an author of the editorial and director of the Institute of Marine and Coastal Sciences at Rutgers University. Vecchione recalled one of his own dives aboard Mir, a Russian submersible.