Accessing Twitter Data. With Twitter configured in your application, you now can write a Spring MVC controller that fetches data for the user who authorized the application and presents it in the browser. 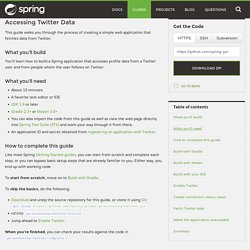 HelloController is just such a controller: src/main/java/hello/HelloController.java HelloController is created by injecting a Twitter object into its constructor. The Twitter object is a reference to Spring Social’s Twitter API binding. The helloTwitter() method is annotated with @RequestMapping to indicate that it should handle GET requests for the root path (/). If the user authorizes the application to access the data, the application can fetch almost any data pertaining to the authorizing user. Speaking of the "hello" view, here it is as a Thymeleaf template: A Simple Web App with Spring Boot, Spring Security and Stormpath. Adding social login to a website using Spring Social. Handling user registration and authentication on a website is hard, both for the users required to remember yet another pair of username/password and for developers implementing a secure handling of the user credentials. 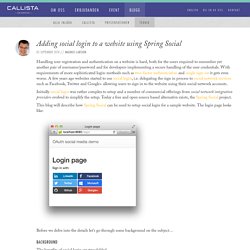 With requirements of more sophisticated login-methods such as two-factor authentication and single sign-on it gets even worse. A few years ago websites started to use social login, i.e. delegating the sign in process to social network services such as Facebook, Twitter and Google+ allowing users to sign in to the website using their social network accounts. Initially social login was rather complex to setup and a number of commercial offerings from social network integration providers evolved to simplify the setup. Today a free and open source based alternative exists, the Spring Social project. Spring Boot in Action Part 3 : Social Login. This article is part3 of the spring boot in action series. 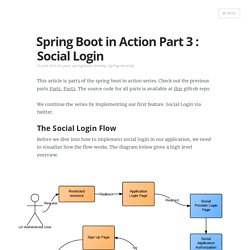 Check out the previous parts Part1, Part2. The source code for all parts is available at this github repo. We continue the series by implementing our first feature. Social Login via twitter. The Social Login Flow. Bundling Multiple WAR Files for Tomcat Environments - AWS Elastic Beanstalk. To deploy multiple web applications to each instance in a Tomcat environment, bundle multiple Web application ARchive (WAR) files into a single source bundle. 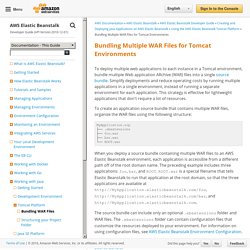 Simplify deployments and reduce operating costs by running multiple applications in a single environment, instead of running a separate environment for each application. This strategy is effective for lightweight applications that don't require a lot of resources. To create an application source bundle that contains multiple WAR files, organize the WAR files using the following structure: Embedded Security CTF. Scattered throughout the world in locked warehouses are briefcases filled with Cy Yombinator bearer bonds that could be worth billions comma billions of dollars. 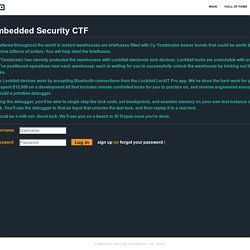 You will help steal the briefcases. Cy Yombinator has cleverly protected the warehouses with Lockitall electronic lock devices. Lockitall locks are unlockable with an app. We've positioned operatives near each warehouse; each is waiting for you to successfully unlock the warehouse by tricking out the locks. The Lockitall devices work by accepting Bluetooth connections from the Lockitall LockIT Pro app. [WeChall] About WeChall. Programming Challenges Playable In Your Browser.

Starfighter: Code. Play. Hack capitalism. The Deadlock Empire. CSS3 Family Tree. Polygonal Map Generation for Games. I wanted to generate interesting game maps that weren’t constrained to be realistic, and I wanted to try some techniques I hadn’t tried before. 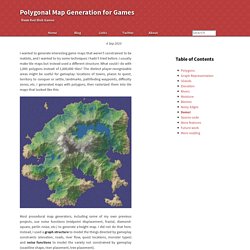 I usually make tile maps but instead used a different structure. What could I do with 1,000 polygons instead of 1,000,000 tiles? What are the best JavaScript IDEs and editors? - Slant. Quintus JavaScript HTML5 Game Engine. Sprites are the building block for a large amount of what you'll do in Quintus, but they are pretty simple creatures in and of themselves. 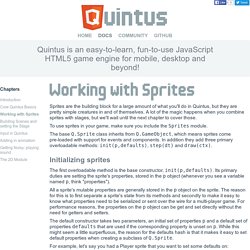 A lot of the magic happens when you combine sprites with stages, but we'll wait until the next chapter to cover those. To use sprites in your game, make sure you include the Sprites module. The base Q.Sprite class inherits from Q.GameObject, which means sprites come pre-loaded with support for events and components. HTML5 Game Engines - Find Which is Right For You. Consul. 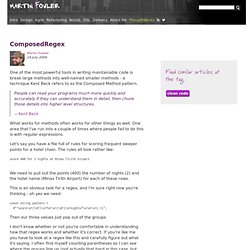 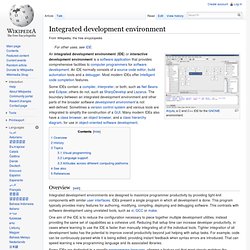 An IDE normally consists of a source code editor, build automation tools and a debugger. Most modern IDEs offer Intelligent code completion features. Loops/While. Loops/While You are encouraged to solve this task according to the task description, using any language you may know. 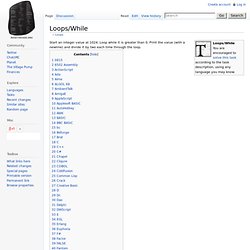 Start an integer value at 1024. Loop while it is greater than 0. Print the value (with a newline) and divide it by two each time through the loop. [edit] 0815 <:400:~}:_:%<:a:~$=<:2:=/^:_: DSL creation tool (Jetbrains) GUIDs as PRIMARY KEYs and/or the clustering key - Kimberly L. Tripp. In SQL Server 7.0 and higher the internal dependencies on the clustering key CHANGED. (Yes, it's important to know that things CHANGED in 7.0… why? Because there are still some folks out there that don't realize how RADICAL of a change occurred in the internals (wrt to the clustering key) in SQL Server 7.0). Online regex tester and debugger: JavaScript, Python, PHP, and PCRE. Matchers.

Mock expectations At the moment only the Mockito library is supported. Mockito allows to specify stubbed values and to verify that some calls are expected on your objects. In order to use those functionalities, you need to extend the org.specs2.mock.Mockito trait: Joda - Next Generation Java. In-Memory OLTP (In-Memory Optimization) New in SQL Server 2014, In-Memory OLTP can significantly improve OLTP database application performance.

In-Memory OLTP is a memory-optimized database engine integrated into the SQL Server engine, optimized for OLTP. To use In-Memory OLTP, you define a heavily accessed table as memory optimized. Memory-optimized-tables are fully transactional, durable, and are accessed using Transact-SQL in the same way as disk-based tables. (99+) Disruptor. LMAX-Exchange/disruptor · GitHub. Concurrency. Dissecting the Disruptor: What's so special about a ring buffer? Recently we open sourced the LMAX Disruptor, the key to what makes our exchange so fast. Why did we open source it? Well, we've realised that conventional wisdom around high performance programming is... a bit wrong. We've come up with a better, faster way to share data between threads, and it would be selfish not to share it with the world.

Plus it makes us look dead clever. On the site you can download a technical article explaining what the Disruptor is and why it's so clever and fast. However I find the whole thing a bit much to digest all at once, so I'm going to explain it in smaller pieces, as suits my NADD audience. First up - the ring buffer. What on earth is a ring buffer? (OK, I drew it in Paint. So basically it's an array with a pointer to the next available slot. As you keep filling up the buffer (and presumable reading from it too), the sequence keeps incrementing, wrapping around the ring: Color Themes & Fonts.