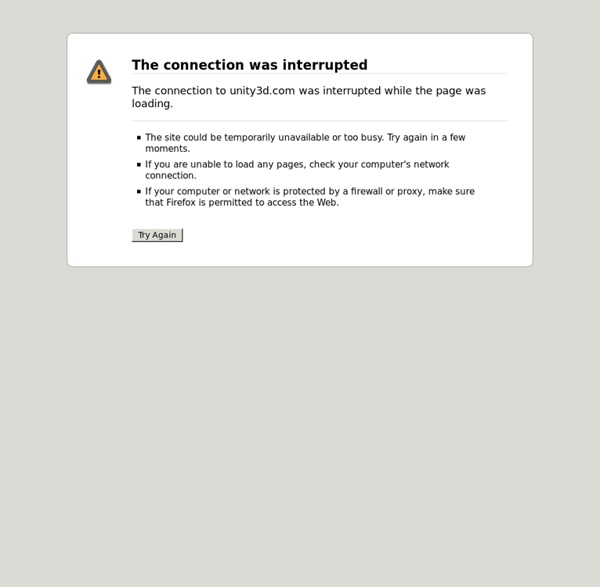 Unity is a game development ecosystem: a powerful rendering engine fully integrated with a complete set of intuitive tools and rapid workflows to create interactive 3D and 2D content; easy multiplatform publishing; thousands of quality, ready-made assets in the Asset Store and a knowledge-sharing community. For independent developers and studios, Unity’s democratizing ecosystem smashes the time and cost barriers to creating uniquely beautiful games. They are using Unity to build a livelihood doing what they love: creating games that hook and delight players on any platform.

Waterbear is Like Scratch, but for JavaScript Unlike Scratch, you can view the code generated by Waterbear. Elza's vision for the project is much like that of Alan Kay's vision for Squeak and the ideas in the book Mindstorms by Seymour Papert. Elza hopes it can be used in programming books and courses to allow learners to explore code in a more immersive environment, or enable individuals to become "casual programmers." He uses his own kids as examples. His 10 year old son learned Scratch and has moved on to more advanced programming. He already thinks of himself as a programmer. Human photo references and textures for artists - 3d.sk ROYALTY-FREE Licence guarantees that once you download the photos you can use them for any personal or commercial project as long as you wish without any additional payment. UPDATED DAILY Save thousands of dollars on human photo references every month. Gain access to a huge source of more than 354,125 photos updated 29 x per month. 4992 x 3360 PIXELS High resolution images with enough detail for the production of 3D characters for cinematic sequences as well as next generation game characters. Whether you work at Dreamworks or Playstation....3D.SK and their constantly expanding image library is essential to your texture pipe.

Designing A Website For Your Class Lesson Plans and Teacher Timesavers - Huge Collection - Instant Lessons View Collection Mega Collection Of Cheatsheets for Designers And Developers Cheatsheets and various quick reference guides are available for almost any type of software and language these days. Unfortunately they’re not always easy to find when you actually need them. This is why I decided to take some time to gather up as many as possible and share them with you here! Hopefully this can be a timesaver for you, along with teaching you a new trick or two. The resources have been divided into various categories to make them easier to find. Below are more than 100 cheat sheets and reference cards for the following topics:

MonkeyJump – Cocos2d and Box2d tutorial using PhysicsEditor and TexturePacker (part 1) Update 6/26/2013: Updated for Cocos2D 2.X and latest version of Texture Packer and Physics Editor. In this tutorial, you’ll learn how to make a game about a monkey having a rough day. He’s just minding his own business, but these crazy objects keep falling from the sky! By the end of this tutorial, you’ll have created a cool physics-enabled game, and learned how using TexturePacker and PhysicsEditor can save you a ton of development time. Exploring Computational Thinking Google is committed to promoting computational thinking throughout the K-12 curriculum to support student learning and expose everyone to this 21st century skill. What is Computational Thinking? Computational thinking (CT) involves a set of problem-solving skills and techniques that software engineers use to write programs that underlie the computer applications you use such as search, email, and maps. Here are specific techniques. Decomposition: When we taste an unfamiliar dish and identify several ingredients based on the flavor, we are decomposing that dish into its individual ingredients. Pattern Recognition: People look for patterns in stock prices to decide when to buy and sell.

The Python Script Collection For Windows - Automating Microsoft Outlook For Outlook automation it is nesseccary to use the makepy utility. You do this either from the tools menu of the Pythonwin-Editor (installed with Pywin32 or ActivePython) or you call the file c:\python23\Lib\site-packages\win32com\client\makepy.py. You then have to select the Outlook Object Library ("Microsoft Outlook 10.0 Object Library" for Office 10.0 or known as Office XP). After that Python generates cachefiles into the directory c:\python23\Lib\site-packages\win32com\gen_py or c:\temp\gen_py to tell Python more about the Outlook object library. UDK Unreal Developer's Kit What is UDK? The Unreal Development Kit is the free edition of Unreal Engine 3 that provides access to the award-winning 3D game engine and professional toolset used in blockbuster video game development, architectural visualization, mobile game development, 3D rendering, digital films and more. Who is it for? Unreal Engine technology is used by game developers, researchers, television studios, machinima directors, artists and students. If you have an idea that needs to be brought to life in a game engine, you might consider UDK.

EDUsummIT 2011: moving education into the digital age Some 120 prominent stakeholders are expected from the EDUsummIT community who are committed to examining the impact of evidence and dissemination strategies on future ICT policies and practices globally. They will report on the impact of UNESCO programmes in ICT in education which served as the basis for the first EDUsummIT conference in 2009 and led to a Call to Action on the Future of ICT in Education. Building on the outcomes of EDUsummIT 2009, the 2011 conference also aims to refine national, international and regional models for the use of ICT in 21st-century education and develop strategies to build a global community in the field of ICT in Education. An A-Z Index of the Bash command line for Linux Commands marked • are bash built-ins Many commands particularly the Core Utils are also available under alternate shells (C shell, Korn shell etc). More bash commands: Linux Command Directory from O'Reilly, GNU CoreUtils.SS64 bash discussion forumLinks to other Sites, books etc

Box2D tutorials - Joints - overview - iforce2d Last edited: July 14 2013 Chinese version -> 中文 Joints Box2D has a number of 'joints' that can be used to connect two bodies together. These joints can be used to simulate interaction between objects to form hinges, pistons, ropes, wheels, pulleys, vehicles, chains, etc. Beyond Pink vs. Blue Share Peggy Orenstein writes in the New York Times today about how various toy stores and toy manufacturers are navigating the minefield of gender and play. Parents of young children often marvel that, despite their own egalitarian intentions, their kids are the ones who police traditional gender norms. Indeed, as Orenstein notes, studies of primate and human toddlers found that while both sexes enjoy stuffed animals and books, boys prefer cars and balls, while girls are drawn to dolls. I myself have an embarrassing childhood memory of being distraught when given the gift of a remote-control airplane; my parents had to remind me to say thank you and then encourage me to play with it—and, of course, it turned out to be a lot of fun. Orenstein points to research finding that children raised in households that practice and preach gender egalitarianism make better romantic partners as adults.

15 essential mobile game development tools From all-in-one indie dev packages to plug-ins for improving player engagement, we bring you a guide to the best mobile game development tools available [This feature was published in the October 2013 edition of Develop magazine, which is available through your browser and on iPad] You’ve got to be in it to win it. And to win it in today’s market, you’ve got to be on mobile.