Meet Generation Z: Forget Everything You Learned About Millennials. Gx cb global powers of retailing. Facebook now used by half of world's online users. Deloitte Mobile Consumer 2015. The Communications Market Report: United Kingdom. Smartphones have overtaken laptops as the most popular device for getting online, Ofcom research has revealed, with record ownership and use transforming the way we communicate. 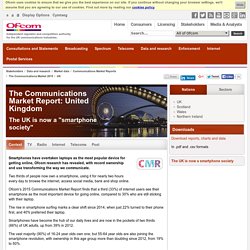 Two thirds of people now own a smartphone, using it for nearly two hours every day to browse the internet, access social media, bank and shop online. Ofcom’s 2015 Communications Market Report finds that a third (33%) of internet users see their smartphone as the most important device for going online, compared to 30% who are still sticking with their laptop. The rise in smartphone surfing marks a clear shift since 2014, when just 22% turned to their phone first, and 40% preferred their laptop. Smartphones have become the hub of our daily lives and are now in the pockets of two thirds (66%) of UK adults, up from 39% in 2012. The surge is being driven by the increasing take-up of 4G mobile broadband, providing faster online access. Introduction and Key Points Download this section Download full document.

Britons spend more time on tech than asleep, study suggests. Generation Z: Websites are boring - social media is everything - WGSN/INSIDER. Being a teenager, I’m on my iPhone every second I can be and when on my phone, I spend most of my time on social media. 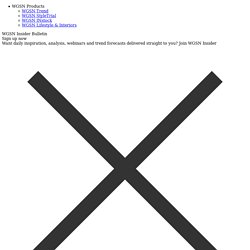 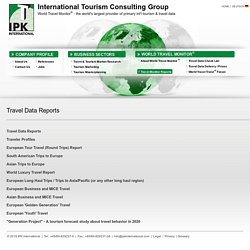 The Core Needs of Online Safety. PSFK and MasterCard's Future of Digital Safety & Security Report explores how companies are evolving with the shifting state of security today The Future of Digital Safety & Security: A Consumer Guide is a 10-week series from PSFK and MasterCard exploring the key trends that are defining the future of digital safety & security. 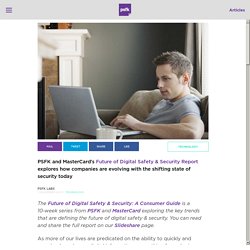 Over 1.1 billion tourists travelled abroad in 2014. International tourist arrivals reached 1,138 million in 2014, a 4.7% increase over the previous year, according to the latest UNWTO World Tourism Barometer. 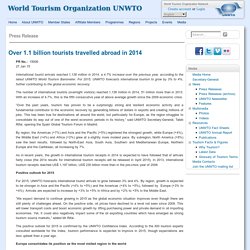 For 2015, UNWTO forecasts international tourism to grow by 3% to 4%, further contributing to the global economic recovery. The number of international tourists (overnight visitors) reached 1,138 million in 2014, 51 million more than in 2013. With an increase of 4.7%, this is the fifth consecutive year of above average growth since the 2009 economic crisis. “Over the past years, tourism has proven to be a surprisingly strong and resilient economic activity and a fundamental contributor to the economic recovery by generating billions of dollars in exports and creating millions of jobs. By region, the Americas (+7%) and Asia and the Pacific (+5%) registered the strongest growth, while Europe (+4%), the Middle East (+4%) and Africa (+2%) grew at a slightly more modest pace. 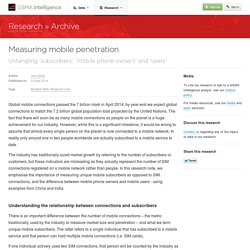 The fact that there will soon be as many mobile connections as people on the planet is a huge achievement for our industry. However, while this is a significant milestone, it would be wrong to assume that almost every single person on the planet is now connected to a mobile network. In reality only around one in two people worldwide are actually subscribed to a mobile service to date. The industry has traditionally sized market growth by referring to the number of subscribers or customers, but these indicators are misleading as they actually represent the number of SIM connections registered on a mobile network rather than people.

Understanding the relationship between connections and subscribers Understanding mobile phone ‘ownership’ Understanding the relationship between subscribers and mobile users. Looking forward in the mobile industry. The GSMA’s Global Mobile Awards are this year celebrating 20 years of extraordinary innovation in the digital communications industry and we are marking this landmark by looking to the future, and with two special new awards: the “Young Mobile Innovator of the Year” and “Connected Women: Leadership in Industry” awards. 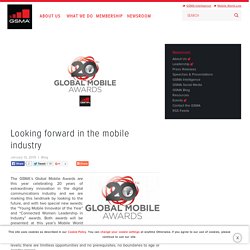 Both awards will be presented at this year’s Mobile World Congress, taking place in Barcelona, 2-5 March 2015. Against a backdrop of global mobile broadband connectivity and billions of smart devices, technology has, over the years, become accessible to nearly everyone on all levels; there are limitless opportunities and no prerequisites, no boundaries to age or gender access. HALF OF THE WORLD’S POPULATION CONNECTED TO THE MOBILE INTERNET BY 2020, ACCORDING TO NEW GSMA FIGURES. November 6, 2014 Press Release An Additional 1.6 Billion Mobile Internet Subscribers Forecast by 2020; GSMA Publishes Digital Inclusion Report Highlighting Efforts to Connect ‘Offline’ Populations Cape Town: Half of the world’s population will be using mobile devices to access the internet by 2020, according to new data released by GSMA Intelligence at the GSMA Mobile 360-Africa event today. 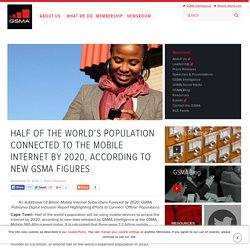 The World Online Population Is Expected To Reach 3.5 Billion By 2017. In 1974, an Indian Bollywood Hindi-language film was released with the title Roti Kapda Aur Makaan (English translation: Food, Clothing, And Shelter), referring to the bare minimums of life. 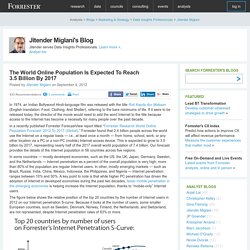 If it were to be released today, the director of the movie would need to add the word Internet to the title because access to the Internet has become a necessity for many people over the past decade. In a recently published Forrester ForecastView report titled “Forrester Research World Online Population Forecast, 2012 To 2017 (Global),” Forrester found that 2.4 billion people across the world use the Internet on a regular basis — i.e., at least once a month — from home, school, work, or any other location via a PC or a non-PC (mobile) Internet access device. Cyborg Utopia: Downloading IQ, Uploading Apprehension  Posted: Updated: Watch the TEDTalk that inspired this post. 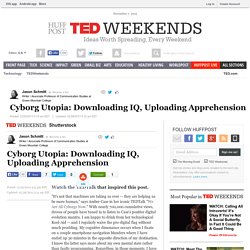 "It's not that machines are taking us over -- they are helping us be more human," says Amber Case in her iconic TEDTalk "We Are All Cyborgs Now. " With nearly 700,000 cumulative views, droves of people have tuned in to listen to Case's positive digital evolution mantra.

Gen Z: Talkin’ ‘bout my generation. Digital, Social & Mobile Worldwide in 2015. 2014 was a landmark year for growth across all things digital, and We Are Social’s new Digital, Social and Mobile in 2015 report indicates that this year will see even more impressive numbers. Including stats for more than 240 countries around the world, and profiling 30 of the world’s biggest economies in detail, this report is the most comprehensive, free compendium of up-to-date digital statistics and data you’ll find. So what do its 376 pages reveal? The Headlines As we’ve seen in our on-going series of Digital Statshot reports, mobile increasingly dominates the digital world, and we’re confident that ‘ubiquitous connectivity’ will gather even more pace during 2015, as cheaper handsets and more affordable data connections reach further around the world.

Mobile Messaging and Social Media 2015. In today’s world, people — particularly young people — are continually finding and adapting new ways of communicating electronically to fit their needs. Case in point: 2015 marks the first time Pew Research Center has asked specifically about mobile messaging apps as a separate kind of mobile activity apart from cell phone texting. And already, according to a new survey, 36% of smartphone owners report using messaging apps such as WhatsApp, Kik or iMessage, and 17% use apps that automatically delete sent messages such as Snapchat or Wickr. Both of these kinds of apps are particularly popular among young adults. Half (49%) of smartphone owners ages 18 to 29 use messaging apps, while 41% use apps that automatically delete sent messages. Teens, Social Media & Technology Overview 2015. 24% of teens go online “almost constantly,” facilitated by the widespread availability of smartphones.

Aided by the convenience and constant access provided by mobile devices, especially smartphones, 92% of teens report going online daily — including 24% who say they go online “almost constantly,” according to a new study from Pew Research Center. Social Media Site Usage 2014. In a new survey conducted in September 2014, the Pew Research Center finds that Facebook remains by far the most popular social media site. Britain Uncovered survey results: the attitudes and beliefs of Britons in 2015. How different are your online and offline personalities? Our habits define us. Digiphrenia — Excerpt From Douglas Rushkoff's Present Shock. Samuel Wilkinson and Beau Lotto, The Ommatidium. Dutch Woman Fakes Trip to Southeast Asia, Surfaces Universal Truth  Did you guys hear the one about the Dutch girl who faked a trip to Southeast Asia? A Dutch woman used Facebook to pretend she went travelling in Asia. Rex Advertisement - Continue Reading Below.

J.g. ballard, predicted social media in i-D 27 years ago. The new acne campaign should remind us to never lose the joy of dressing up. GSMA Intelligence — Research — Measuring mobile penetration.