27 Surreal Places To Visit Before You Die. Want to Be Happier? Stop Doing These 10 Things Right Now. 174,203 Things You Can Do Instead of Watching TV. 40 Ways to Feel More Alive. “I don’t believe people are looking for the meaning of life as much as they are looking for the experience of being alive.” 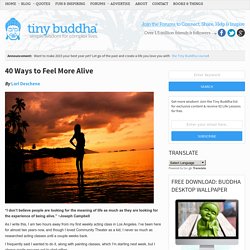 ~Joseph Campbell As I write this, I am two hours away from my first weekly acting class in Los Angeles. I’ve been here for almost two years now, and though I loved Community Theater as a kid, I never so much as researched acting classes until a couple weeks back. I frequently said I wanted to do it, along with painting classes, which I’m starting next week, but I always made excuses not to start either. I was too busy. The list went on and on, but I realized the last two were the big ones for me. Also, I hesitate to give large amounts of time to hobbies I have no intention of pursuing professionally. I realized last month, however, that I want to prioritize more of the things that make me feel passionate and excited—and not just occasionally, but regularly. I don’t know if these classes are “leading” anywhere.

Say Something You’ve Been Meaning to Say. Instructions for life. Al Turtle's Relationship Wisdom. © 2001 Al Turtle Print this Paper in PDF The Chart Print this chart in PDF This material I developed over several years as I pondered, examined, experienced, and resolved the issue of reliable connection. 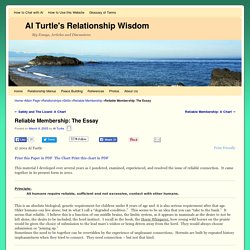 It came together in its present form in 2001. Principle: All humans require reliable, sufficient and not excessive, contact with other humans. This is an absolute biological, genetic requirement for children under 8 years of age and it is also serious requirement after that age. Sometimes the need to be together can be overridden by the experience of unpleasant connections. The Connection Continuum Childhood is not all one way or the other. A: Clingers: Some people receive Unreliable or Insufficient Contact in childhood. This causes PANIC!! When an organism experiences too little or intermittent connection, its old reactive, reptilian brain activates. These same skills of clinging and pursuing, driven by PANIC, become habits and follow the child into adulthood. Reactive Behavior Symptom Focus. Al Turtle's Relationship Wisdom. Assuming you want her (him) back. 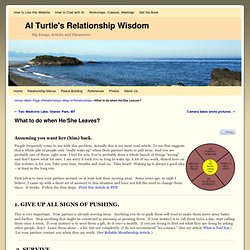 People frequently come to me with this problem. Actually this is my most read article. To me that suggests that a whole pile of people only "really wake up" when their partner starts to pull away. And you are probably one of them, right now. I feel for you. First job is to turn your partner around, or at least halt their moving away.

This is very important. Do not be surprised that you may feel awful, or sick, or depressed. See a counselor. And do this work so that your partner knows. When I say “visibly,” I mean that you take opportunities to let them know that you are doing something. It is reasonable that your partner will try to contact you. Good luck. P.S. You will probably also want to check out my Map of Relationships to put a clear framework around what is going on and what your choices are. Letting Go and Starting Over When It's Hard. “Letting go isn’t the end of the world; it’s the beginning of a new life.” ~Unknown This June marked 12 years since I got divorced and moved 1,000 miles away from my hometown. It’s an anniversary that I usually remember, but not one that I tend to dwell on—until this year.

This year, the memories of the demise of my first marriage were hovering at the forefront of my mind. Maybe it’s because I saw a friend who is roughly the same age I was, going through similar hard decisions. Whatever the reason, it caused me to reflect on what I’ve learned in the last decade or so. My ex-husband and I met in high school, when we were seventeen, and had been dating for seven years when we got engaged. I think on some level we knew, even then, that we shouldn’t get married, that things weren’t that great, but people were starting to ask, and everyone (including us) assumed that we would get married. Things were okay for a little while, and outwardly we seemed happy. Was leaving painful?