10 best theatre podcasts to listen to in 2017. The audience for podcasts is huge, and growing all the time (up 23% in 2016), with some of the most successful series reaching a bigger audience than many traditional radio broadcasts. 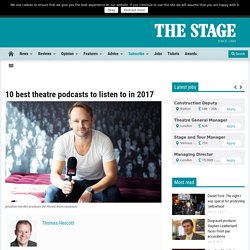 The creation of podcasts is relatively simple, so anyone with a good idea and some basic equipment can potentially reach this global audience. It’s no wonder theatre companies have got in on the act. There are now many great theatre podcasts available, tackling all aspects of the industry, and they are a great, free source of information for industry professionals and students. In 2016, we saw the launch of The Stage podcast. Launched at the Brighton Festival, with follow-up episodes at Edinburgh, it is offering some great interviews, discussions and analysis.

BWW Roundup: Top-20 Podcasts for Theatre Fans. Irish Film Board look to capitalise on record breaking year by making more films with homegrown talent. THE Irish Film Board are hoping to capitalise on a record breaking year in 2016 by pumping out a series of Irish movies starring top homegrown talent including Cillian Murphy, Colm Meaney and Tom Vaughan-Lawlor. 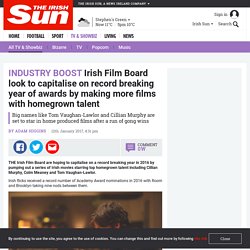 Irish flicks received a record number of Academy Award nominations in 2016 with Room and Brooklyn taking nine nods between them. Two more Irish Film Board backed movies – The Lobster starring Colin Farrell and Whit Stillman’s Love and Friendship – also competed at the top of the U.S. independent box office charts in the summer of last year. In total, Irish films took home box office figures of more than €160million, with production activity in Ireland climbing over €250million for the first time in history. Speaking to the Irish Sun at the launch of the IFB’s Production Catalogue for 2017, CEO James Hickey said that if they want to keep this ball rolling then the Government need to keep increasing their funding, which currently sits at almost €13million for next year.