Medical tattoo. A medical tattoo is a tattoo used to treat a condition, communicate information, or mark a body location. 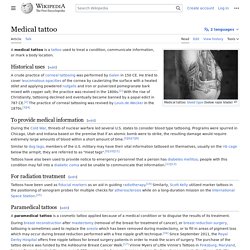 Historical uses[edit] A crude practice of corneal tattooing was performed by Galen in 150 CE. He tried to cover leucomatous opacities of the cornea by cauterizing the surface with a heated stilet and applying powdered nutgalls and iron or pulverized pomegranate bark mixed with copper salt; the practice was revived in the 1800s.[1] With the rise of Christianity, tattooing declined and eventually became banned by a papal edict in 787 CE.[2] The practice of corneal tattooing was revived by Louis Von Wecker in the 1870s.[3][4] To provide medical information[edit] During the Cold War, threats of nuclear warfare led several U.S. states to consider blood type tattooing.

Similar to dog tags, members of the U.S. military may have their vital information tattooed on themselves, usually on the rib cage below the armpit; they are referred to as "meat tags".[9][10][11] For radiation treatment[edit] Reclaiming Inuit culture, one tattoo at a time. Nunavut (CNN) — Candice Pedersen remembers hearing about her great-grandmother's tattoos and wanting the same traditional markings on her skin. 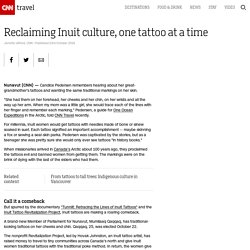 "She had them on her forehead, her cheeks and her chin, on her wrists and all the way up her arm. When my mom was a little girl, she would trace each of the lines with her finger and remember each marking," Pedersen, a guide for One Ocean Expeditions in the Arctic, told CNN Travel recently. For millennia, Inuit women would get tattoos with needles made of bone or sinew soaked in suet. Each tattoo signified an important accomplishment -- maybe skinning a fox or sewing a seal-skin parka. Pedersen was captivated by the stories, but as a teenager she was pretty sure she would only ever see tattoos "in history books. " When missionaries arrived in Canada's Arctic about 100 years ago, they proclaimed the tattoos evil and banned women from getting them. Tattoo hunter. Whang-od - Recherche Google.

KVB Broschuere Hygienische Aufbereitung Medizinprodukte. Inking the Victorians: The Story of Sutherland Macdonald -Britain’s First Professional Tattooist. With around one in three people in the UK now having at least one tattoo, body art is clearly becoming more mainstream in today’s society. 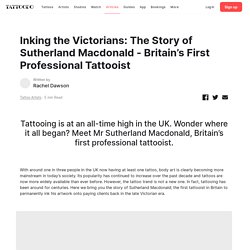 Its popularity has continued to increase over the past decade and tattoos are now more widely available than ever before. However, the tattoo trend is not a new one. In fact, tattooing has been around for centuries. Here we bring you the story of Sutherland Macdonald; the first tattooist in Britain to permanently ink his artwork onto paying clients back in the late Victorian era. Sutherland Macdonald was born in 1860 in Leeds, Yorkshire. Macdonald was discharged from the Army in 1881 and moved to the garrison town of Aldershot, where he worked as a chiropodist. Hammam Turkish Baths in London Macdonald’s studio was decorated in an oriental theme with plush furnishings, in a bid to attract wealthy travellers returning from the East, wanting to replicate high-end Japanese-style tattoos in London. Macdonald’s clientele was very varied. Noireink.wordpress. TTTism - Contemporary tattooing. Luca Font is an Italian tattooist currently based in Milan. 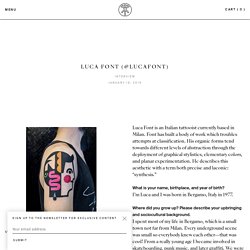 Font has built a body of work which troubles attempts at classification. His organic forms tend towards different levels of abstraction through the deployment of graphical stylistics, elementary colors, and planar experimentation. He describes this aesthetic with a term both precise and laconic: “synthesis.” What is your name, birthplace, and year of birth? I’m Luca and I was born in Bergamo, Italy in 1977. Where did you grow up? Where do you currently work? How long have you been tattooing? What inspired you to learn tattooing, and what did you initially learn how to tattoo? Were you trained through a formal apprenticeship? Yasmine Bergner. Cutest Ever Minute Tattoos. Little Tattoos Inspired by Nature. Stunning Graphical Tattoos. Dreamlike Psychedelic Tattoos. 50 Incredible Tattoos Inspired By Books. 13. A thigh, a foot and an arm optical illusion [mob] 13. 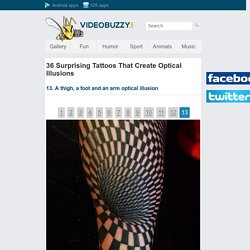 This Photo Series Shows People's Hidden Tattoos In A Whole New Way. Posted Mar 12, by Brandon Siewert In New York photographer, John Rennhack's ongoing “Digital X-Ray” tattoo photo project, he uses an iPad to capture scaled pictures of his models' exposed tattoos, then has them align the images with the clothed place on their bodies where the tattoos would be, thus creating an x-ray like effect. 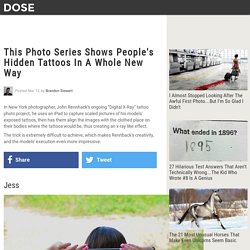