16 Totally Useful Filipino Swear Words And How To Use Them. 10 slang phrases you'll need to know in the Philippines. Photo: whereisria FILIPINO SLANG is a constantly growing and evolving list. 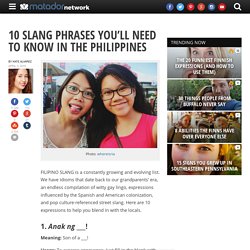 We have idioms that date back to our grandparents’ era, an endless compilation of witty gay lingo, expressions influenced by the Spanish and American colonization, and pop culture-referenced street slang. Here are 10 expressions to help you blend in with the locals. 1. Anak ng ___! Meaning: Son of a ___! Usage: To express annoyance. Example: “Anak ng tokwa! 2. Meaning: “Right?” Usage: One of the easiest expressions to learn, diba may be placed at the start or end of your question, and you may sprinkle your English sentences with diba, making it sound like you know Taglish (Tagalog-English). Example: In straight Tagalog: Taga dito ka, diba? 3. Meaning: A contraction of Jesus, Mary, and Joseph Usage: As an interjection, especially when you’re angry, frustrated, or in disbelief. Example: “Niloko na naman siya ng asawa niya? 4. Meaning: Hay is “sigh,” but hay naku has no direct translation. 5. 6. 7. 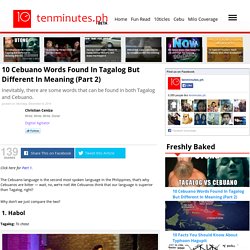 The Cebuano language is the second most spoken language in the Philippines, that’s why Cebuanos are bitter — wait, no, we’re not! We Cebuanos think that our language is superior than Tagalog, right? Why don’t we just compare the two? 1. Habol Tagalog: To chase BBC via buddy2blogger.blogspot.com Cebuano: Blanket/blunt depending on which syllable is stressed Drew Daywalt youtube channel 2. Wa'y Blima! Cebu Visitors Guide: Language: Cebuano, Tagalog, English. Do Cebuanos prefer English than Tagalog? It’s a Tagalog drama cliché when an actress portrays the role of a Cebuana (or Bisayas in general) who speaks Tagalog with a thick accent. 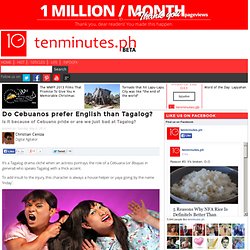 To add insult to the injury, this character is always a house helper or yaya going by the name ‘Inday’. GMA Films and APT Entertainment But, Cebuanos don’t seem to mind and protests are almost never heard of. Majority of them still watch Filipino dramas avidly. Do Cebuanos prefer English than Tagalog? Perhaps it’s the reason why they don’t complain being portrayed as being bad at Tagalog but lose their mind when their proficiency in English is mocked. inquirer.net Maybe their Tagalog is really bad as what we see in the movies and speaking English is a better alternative. Do you think Cebuanos dislike the Tagalogs that’s why they refuse to speak their language? Or is it because of Cebuano pride or they are just bad at Tagalog? To be fair, Cebuanos are good in English. Reuters via www.saudigazette.com.sa. 10 English Words/Phrases That Only Filipinos Usually Use.

According to this list, the Philippines is the 6th country that has the most English speakers. 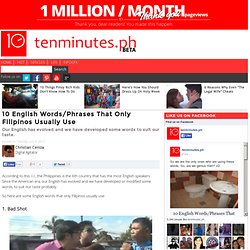 Since the American era, our English has evolved and we have developed or modified some words, to suit our taste probably. So here are some English words that only Filipinos usually use: 1. 8 More Filipino Words That Don’t Translate to English. Lost in Translation: Fifty Shades of Grey in Filipino. How do you say "butt plug" and "nipple clamp" in Filipino? 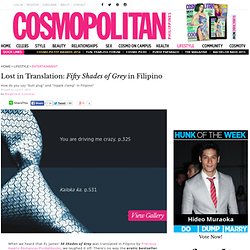 Posted on June 7, 2013 by Margarita A. Contreras When we heard that EL James' 50 Shades of Grey was translated in Filipino by Precious Hearts Romances Pocketbooks, we laughed it off. There's no way the erotic bestseller can be translated properly in our language—can you even say "nipple clamp" and "butt plug" in Filipino? But during a recent trip to National Bookstore, we spotted the novel's famous grayscale cover and just had to snag the last copy(!) Lesson 1. Light muna tayo General facts about the Visayan language: - usually synonymous with the Cebuano dialect, can be referred to as Bisayâ.- spoken in Cebu and majority of cities and towns in Mindanao. 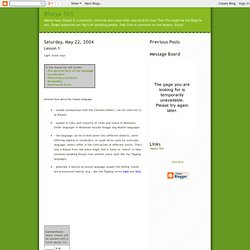 Other languages in Mindanao include Ilonggo ang Muslim languages.- the language can be broken down into different dialects, some differing slightly in vocabulary, or usual terms used for everyday language, others differ in the contraction of different words. That's why a Bisayâ from one place might find it funny or "weird" to hear someone speaking Bisayâ from another place (just like the Tagalog language).- generally a heavily accented language usually the ending vowels are pronounced heavily (e.g., like the Tagalog terms lupâ and sirâ) The lesson will be divided into sections (all sections may not be included in one lesson): VocabularyUsage Syntax and grammarDissecting sentences and phrases For this lesson let's base it from the sentence below: ayo-ayo.

70 Things You Didn't Know Had Filipino Names. Have you ever come across something you know all your life but never knew the exact name to call it? 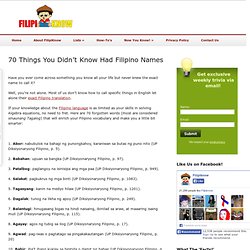 Well, you’re not alone. Most of us don’t know how to call specific things in English let alone their exact Filipino translation. If your knowledge about the Filipino language is as limited as your skills in solving Algebra equations, no need to fret. Here are 70 forgotten words (most are considered sinaunang Tagalog) that will enrich your Filipino vocabulary and make you a little bit smarter: 1. 2. 3. 30 Filipino Words With No English Equivalent.