Anonymous – the uber-secret handbook compiled by Anonymii Versio. Anonymous & LulzSec. Net Privacy and Anonymity. Unravelling TrapWire: The CIA-Connected Global Suspicious Activity Surveillance System. We Are Legion: The Story of the Hacktivists (Full Movie) YouTube. Anonymous Hacks Westboro Baptist Church Website LIVE. We Are Legion: Digital (R)Evolution. Operation Clambake - The Inner Secrets Of Scientology. Massive information dump by Anonymous on hundreds of cops, including a ‘pedo cop’ Anonymous has been extremely active over the last few weeks; for one, disclosing the inept state of Alabama’s privacy of 40,000 of its residents, after hacking into their site in just minutes. 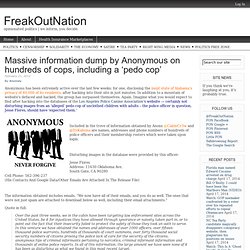 In addition to a mountain of website’s defaced and hacked, the group has surpassed themselves. Again. Imagine what you would expect to find after hacking into the databases of the Los Angeles Police Canine Association‘s website — certainly not disturbing images from an ‘alleged’ pedo cop of unclothed children with adults – the police officer in question, Jesse Flores, should have ‘expected them.’

Included in the trove of information obtained by Anons @CabinCr3w and @ItsKahuna are names, addresses and phone numbers of hundreds of police officers and their membership rosters which were taken upon login. Disturbing images in the database were provided by this officer: Steubenville High School Students Joke About Rape In Video Leaked By Anonymous. A chilling video leaked by an Anonymous cell this week has added a new twist to a sordid tale of alleged rape that has shattered the peace of a close-knit Ohio football town. 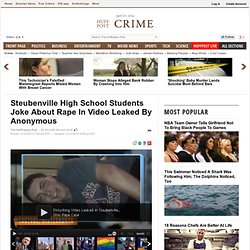 The disturbing 12-minute video, posted online Tuesday by the hacktivist group “Knight Sec,” shows teens making jokes about the events that reportedly transpired on Aug. 22. One teen appears to refer to the victim as "deader than" Trayvon Martin, and adds, "she is so raped her p**s is about as dry as the sun right now. " Rehtaeh Parsons suicide: Anonymous issues attack on N.S. justice system.

One day after threatening to release the identities of four boys allegedly involved in the gang rape of teenager Rehtaeh Parsons, the hacktivist group Anonymous has issued a blistering attack on Nova Scotia Justice Minister Ross Landry and other authority figures over their decision not to prosecute in the case. 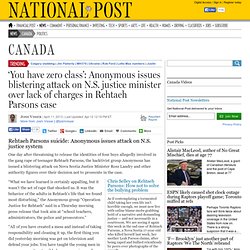 Chris Selley on Rehtaeh Parsons: How not to solve the bullying problem As if contemplating a tormented child taking her own life isn’t horrible enough, we must now live with online blame-mobs grabbing hold of a narrative and demanding justice — and not necessarily in a courtroom. We are seeing it again this week in the sad case of Rehtaeh Parsons, a Nova Scotia 17-year-old who killed herself last week, her mother Leah Parson claims, after being raped and bullied relentlessly by peers over photographs of the assault.

Read more . . . “What we have learned is certainly appalling, but it wasn’t the act of rape that shocked us. Police did not lay charges in the incident. Anonymous Targets Missouri Town Over Dropped Rape Charges. Hacked by Knightsec. Feds stumbling after Anonymous launches 'Operation Last Resort' The U.S. 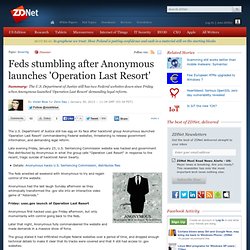 Anonymous Operation NSA - Dutch Ruppersberger. This guy was more than aware of PRISM's unconstitutional surveillance but supported it anyway because he was given over $600,000 from defense contractors to do so. : evolutionReddit. Anonymous. About Anonymous is an ad-hoc group of Internet users who are often associated with various hacktivist operations, including protests against Internet censorship, Scientology and government corruption. 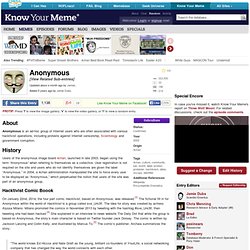 History Users of the anonymous image board 4chan, launched in late 2003, began using the term “Anonymous” when referring to themselves as a collective. Internet Hate Machine. About Internet Hate Machine is a term initially used by a Los Angeles news station to describe Anonymous, which has since been co-opted as an inside joke by members of the group. 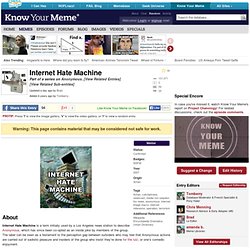 Rules of the Internet. Anonymous retreats from Mexico drug cartel confrontation. Plans by the hacker collective Anonymous to expose collaborators with Mexico's bloody Zetas drug cartel – a project it dubbed "#OpCartel" – have fallen into disarray, with some retreating from the idea of confronting the killers while others say that the kidnap of an Anonymous hacker, the incident meant to have spawned the scheme, never happened. 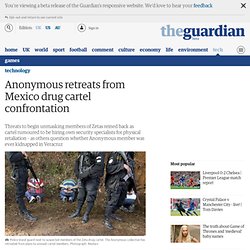 The apparent climbdown by the group came as one security company, Stratfor, claimed that the cartel was hiring its own security experts to track the hackers down – which could have resulted in "abduction, injury and death" for anyone it traced. D Magazine : Barrett Brown is Anonymous. Comment The night before Michael Isikoff came to Dallas, I got an e-mail from Barrett Brown. 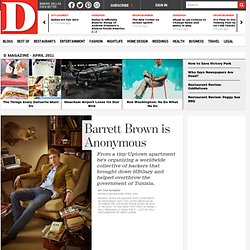 “Apparently Isikoff is freaked out about having another journalist here,” it said. “But I’ll secretly record the proceedings and provide to you.” A little context: Michael Isikoff is a former investigative reporter for Newsweek. Now he’s a correspondent for NBC News. Me, I first encountered Brown in 1998, when he was a 16-year-old intern at the Met, a now-defunct alternative weekly where I worked. Anonymous is dying. What comes next? : anonymous. Overview for Sethdood. Anonymous 101: Introduction to the Lulz. (Editor’s Note: Any decent coverage of Anonymous is going to verge on some NSFW material at points. 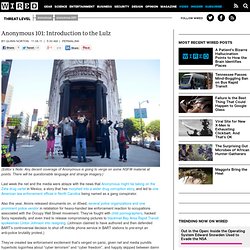 There will be questionable language and strange imagery.) Last week the net and the media were ablaze with the news that Anonymous might be taking on the Zeta drug cartel in Mexico, a story that has morphed into a wider drug corruption story, and led to one American law enforcement official in North Carolina being named as a gang conspirator. Also this year, Anons released documents on, or d0xed, several police organizations and one prominent police vendor in retaliation for heavy-handed law enforcement reaction to occupations associated with the Occupy Wall Street movement. They’ve fought with child pornographers, hacked Sony repeatedly, and even tried to release compromising pictures to blackmail Bay Area Rapid Transit spokesman Linton Johnson into resigning. How Anonymous Picks Targets, Launches Attacks, and Takes Powerful Organizations Down. Image Design: Giles Revell No one but Hector Xavier Monsegur can know why or when he became Sabu, joining the strange and chaotic Internet collective known as Anonymous. 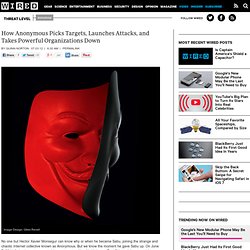 But we know the moment he gave Sabu up. On June 7, 2011, federal agents came to his apartment on New York’s Lower East Side and threatened the 28-year-old with an array of charges that could add up to 124 years in prison. So Hector Monsegur, who as Sabu had become a mentor and icon to fellow members of Anonymous, surrendered his online identity to a new, equally faceless and secretive master: the FBI. For the next eight months, Sabu continued to rage across the Internet as a core member of AntiSec, a blackhat hacking group within Anonymous.