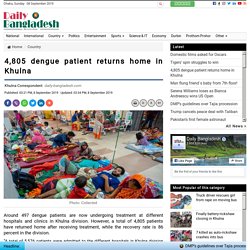 Of them, 4,805 patients have returned home after recovery,” said an official release of Directorate General of Health Services (DGHs) in Khulna. According to DGHS, a total of 12,407 dengue test kits have been reserved in the Khulna division. 783 dengue patients hospitalize in 24hrs  Another woman dies of dengue in Khulna. PLOS 23/03/17 Dengue seroprevalence, seroconversion and risk factors in Dhaka, Bangladesh. Abstract Background. 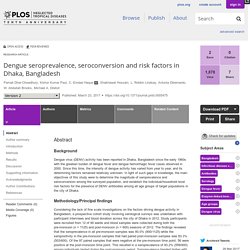 INDIAN JOURNAL OF MEDICAL RESEARCH - 2012 - Advances in developing a climate based dengue outbreak models in Dhaka, Bangladesh: Challenges & opportunities. Virusdisease. 2018 Sep;29(3):303-307. Circulating dengue virus serotypes in Bangladesh from 2013 to 2016. PLOS 21/06/18 Risk factors for the presence of dengue vector mosquitoes, and determinants of their prevalence and larval site selection in Dhaka, Bangladesh. Abstract Dengue viruses are responsible for over 100 million infections a year worldwide and are a public health concern in Bangladesh. 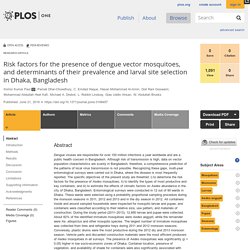 Although risk of transmission is high, data on vector population characteristics are scanty in Bangladesh; therefore, a comprehensive prediction of the patterns of local virus transmission is not possible. Recognizing these gaps, multi-year entomological surveys were carried out in Dhaka, where the disease is most frequently reported. The specific objectives of the present study are threefold: i) to determine the risk factors for the presence of Aedes mosquitoes; ii) to identify the types of most productive and key containers; and iii) to estimate the effects of climatic factors on Aedes abundance in the city of Dhaka, Bangladesh.

Entomological surveys were conducted in 12 out of 90 wards in Dhaka. Editor: Olle Terenius, Swedish University of Agricultural Sciences, SWEDEN Received: January 10, 2018; Accepted: June 7, 2018; Published: June 21, 2018. PLOS 12/11/18 Geostatistical mapping of the seasonal spread of under-reported dengue cases in Bangladesh. Abstract Geographical mapping of dengue in resource-limited settings is crucial for targeting control interventions but is challenging due to the problem of zero-inflation because many cases are not reported. 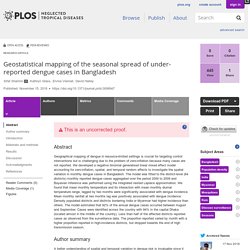 We developed a negative binomial generalised linear mixed effect model accounting for zero-inflation, spatial, and temporal random effects to investigate the spatial variation in monthly dengue cases in Bangladesh. The model was fitted to the district-level (64 districts) monthly reported dengue cases aggregated over the period 2000 to 2009 and Bayesian inference was performed using the integrated nested Laplace approximation. We found that mean monthly temperature and its interaction with mean monthly diurnal temperature range, lagged by two months were significantly associated with dengue incidence. 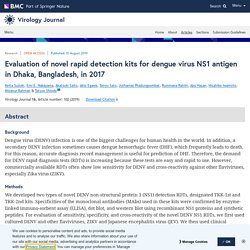 To increase testing throughput, we used a dipstick format, which permitted completion of each test in approximately 15 min (depending on humidity conditions). We conjugated the MAbs with AuNPs, adsorbed the MAbs onto nitrocellulose membranes, and tested all combination of MAbs by placing dipsticks in microcentrifuge tubes or the wells of a 96-well plate containing 60 μL of extraction buffer and 30 μL of sample specimen per tube or well. First, we tested recombinant NS1 proteins of all four serotypes of DENV and selected 12 combinations that showed signal/background ratios greater than 2.0. 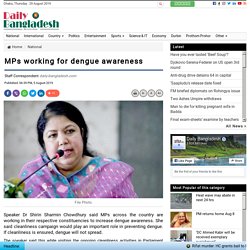 At this time, ‍she urged all to keep Parliament House, NAM Bhaban and residential complex clean. Shirin Sharmin Chowdhury said cleanliness is an ongoing issue, which will continue in the future. She underscored the importance of improving the environment-friendly garbage disposal and drainage system at the Jatiya Sangsad Bhaban area, the Member of Parliament House and the residential complex. The Speaker directed for the immediate removal of unused furniture at various places including the Parliament building area. Kushtia’s 1st dengue case reported. What should dengue patient avoid. Oily Foods If anybody infected dengue fever he/she must abstain from oily foods. 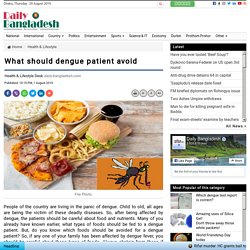 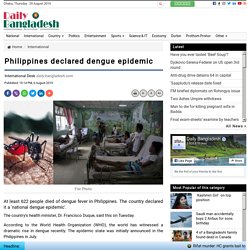 Francisco Duque, said this on Tuesday. According to the World Health Organization (WHO), the world has witnessed a dramatic rise in dengue recently. The epidemic state was initially announced in the Philippines in July. From January to July 20 this year, the number of dengue patients was recorded in the Philippines is 1 lakh 46 thousand and 62. This figure is 98 percent higher than last year. Health Minister Francisco Duke said in a statement that it was necessary to declare a national epidemic to identify where the outbreak was needed and to enable local government units to cope with the epidemic situation by using their rapid response funding. App launches to prevent dengue. The app has launched by signing an MoU among nine organizations including three ministries, two city corporations of Dhaka and a2i (Access to Information). 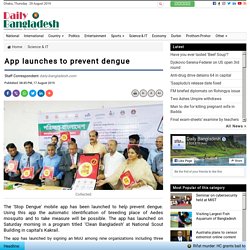 Under the overall supervision of the e-CAB; E-post and BD-Youth provided the technical supports to make this app. “By using the ‘Stop Dengue’ app, anyone can identify the breeding place of mosquito anywhere of the country,” said Mohammad Abdul Wahed Tomal, General Secretary of e-CAB, regarding the use and functionality of the app. This will create a mapping of mosquito breeding places everywhere in the country. ‘Ministry monitoring dengue situation round the clock’ In an interview with UNB, the minister said, “A cell has been opened at the ministry which is monitoring whether doctors are working or not and taking instant actions if any negligence is found.” 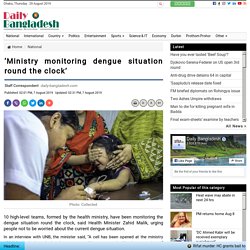 He said all the civil surgeons have been alerted over the situation and medical teams are being sent to each district to provide training on dengue treatment. Besides, Zahid Malik said, a booklet or guideline is being distributed among people to raise awareness and control dengue. The Directorate General of Health Services (DGHS) is in touch with foreign doctors to learn their experiences about dengue treatment, the minister said. Responding to a question, he said, “We were concerned about the Eid time. The Eid vacation of the officials concerned has already been cancelled and we’re monitoring the situation constantly.” There is no shortage of doctors, nurses as well as dengue testing kits and saline, the minister affirmed.

Army chief installs dengue elimination drive in Dhaka Cant. On Thursday, the Army Chief inaugurated the Dengue Elimination Campaign-2019 at the Officers' Club premises of Dhaka Cantonment. Sources informed that, in order to prevent the dengue disease which is increasing alarmingly, the campaign is launched to create necessary preventive awareness for the military and civilian members of the Bangladesh Army.

Army Chief in dengue eradication campaign at Cantonment's Officers' Club premises -Photo: ISPR After the inauguration, the army chief said, “The outbreak of dengue disease is caused by Aedes mosquito bites. College student dies of dengue in Shariatpur. Philippines declared dengue epidemic. Govt`s efforts continue to control dengue on Eid. College student dies of dengue in Magura. The deceased was identified as the son of Mizanur Rahman Mollah of Chandpur village of Sadar Upazila and a first-year student of Sattojitpur College in Magura.

Suman Molla's uncle Gaffar Mollah Madhu said that Suman was diagnosed with dengue on August 8 after being attacked by fever at home. He was admitted to Magura 250-bed hospital on the same day. But as his condition deteriorated, doctors referred him to Faridpur Medical College Hospital four days later. He died while undergoing treatment at around 7:30 am on Saturday. Magura 250-bed hospital caretaker Dr. No dengue detection kits in Health Complex  25,872 dengue patients got round. The information was obtained from a report from the Emergency Operations Center and Control Room of the Health Department on Thursday. According to the report, currently, 8 thousand 766 patients are admitted to different hospitals across the country. No dengue detection kits in Health Complex  Expatriate woman dies of dengue. HC directs to monitor dengue test fee  Besides, the court also advised providing paracetamol and saline for dengue patients in public hospitals as well as in private hospitals.

On Monday, the High Court bench comprising Justice FRM Nazmul Ahasan and Justice KM Kamrul Quader passed the order in self-motivated after Lawyer Mostak Ahmed Chowdhury presented news regarding this in the court. The director-general of the health department has been instructed to submit the report on August 8 following the order. Prosecutor Mostaq Ahmed Chowdhury was present during the hearing. The Deputy Attorney General Barrister ABM Abdullah Al Mahmud Bashar was present for the state. In case of dengue patients- private hospitals and clinics could not be allowed as “a five-star hotel”, the court said during the hearing, “Those private hospitals — take the five-star hospital bills — their patient care should be as a five-star.” Earlier on July 25, the news was reported to some national daily under the heading “Extra Fees for Dengue Test”. Can papaya leaf juice or coconut oil prevent dengue?

Does papaya leaf juice really effective to prevent dengue? It is spoken of that if you add a few more ingredients to the papaya leaf juice and drink it at a certain time interval, it is possible to recover from dengue quickly. How logical it is:- Mohammad Mujibur Rahman, a teacher in the medicine department of Dhaka Medical College, said, “The claim has no scientific basis that papaya leaf juice plays a role in preventing the dengue.

Nothing to be panicked in dengue: Malek. Nothing to be panicked in dengue: Malek. Dengue panic in CU. It is found that Mosquito nuisance in the various places including Babui Chottor, Shaheed Minar across the University campus. Besides, sources to born Aedes mosquito have been made due to ongoing beautification activities across the campus. CU Toussef Hasan said, “Preventive measures should be taken in the halls now. Once the infection begins, it can go beyond control.” Marzia Sultana, another student of the university who lives in Nawab Faizunnesa Chowdhurani Hall, said, “The mosquito nuisance is too much in the halls, we couldn’t sleep well.

Mosquito production is increasing due to the wet surroundings in the hall. To the question of whether the university students have been infected with dengue till now the university medical officer Shahida Shimu said, “Many people are coming with fever. Bangabandhu Sheikh Mujibur Rahman Hall Principal Zia Uddin said, “We will take all measures to ensure the safety of residential students within a very short time.