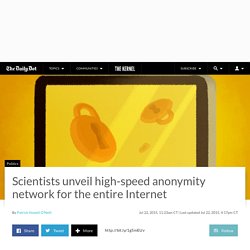 Six academics published a research paper on Wednesday focused on a new, higher-speed anonymity network designed to thwart global surveillance and reinforce the privacy of Internet users worldwide. The new tech is called HORNET: High-speed Onion Routing at the Network Layer. The new design, which significantly shifts around the size and logic of the anonymity network, is said to enable HORNET nodes (the computers that make up the network) to process anonymous traffic at over 93Gb/s, the researchers assert, giving the network the opportunity to scale widely and quickly. 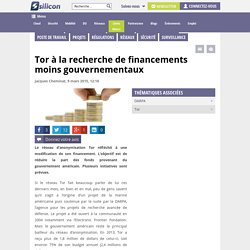 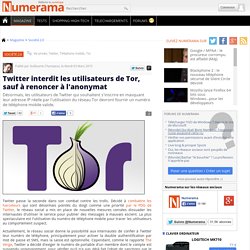 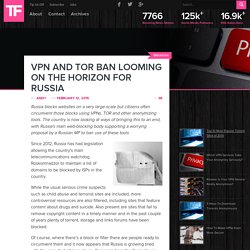 The country is now looking at ways of bringing this to an end, with Russia's main web-blocking body supporting a worrying proposal by a Russian MP to ban use of these tools Since 2012, Russia has had legislation allowing the country’s main telecommunications watchdog Roskomnadzor to maintain a list of domains to be blocked by ISPs in the country. While the usual serious crime suspects such as child abuse and terrorist sites are included, more controversial resources are also filtered, including sites that feature content about drugs and suicide. Also present are sites that fail to remove copyright content in a timely manner and in the past couple of years plenty of torrent, storage and links forums have been blocked. Levin’s proposals to block anonymizing tools and networks is not new. Le FBI a utilisé de vieilles recettes de hackers pour infiltrer le réseau Tor. 01net le 17/12/14 à 17h49. 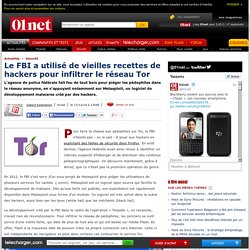 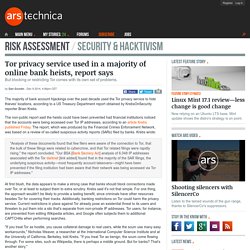 The non-public report said the heists could have been prevented had financial institutions noticed that the accounts were being accessed over Tor IP addresses, according to an article Krebs published Friday. Joker Lets You Instantly Stream Perfectly Legal And Legitimate Torrent Files. Let’s say there’s a torrent online you would like to view. 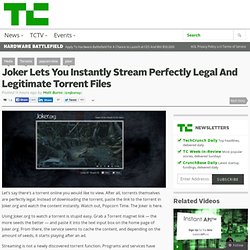 After all, torrents themselves are perfectly legal. Instead of downloading the torrent, paste the link to the torrent in Joker.org and watch the content instantly. Newly Proposed Amendment Will Allow FBI to Hack TOR and VPN Users. In order to overcome the dilemma of privacy on internet, FBI has requested an amendment in the Rule 41 of Federal rules of criminal procedure. 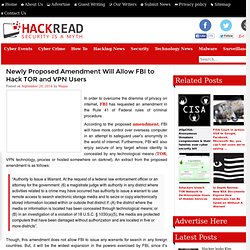 According to the proposed amendment, FBI will have more control over overseas computer in an attempt to safeguard user’s anonymity in the world of internet. Furthermore, FBI will also enjoy seizure of any target whose identity is concealed by any technological means (TOR, VPN technology, proxies or hosted somewhere on darknet). An extract from the proposed amendment is as follows: “Authority to Issue a Warrant. Though, this amendment does not allow FBI to issue any warrants for search in any foreign countries. TorrenTV : les torrents sur l’Apple TV sans les télécharger. Is Your VPN / Proxy Working? Check Your Torrent IP-Address. Millions of BitTorrent downloaders use proxies or VPN services to protect their privacy. 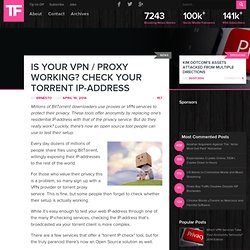 These tools offer anonymity by replacing one's residential IP-address with that of the privacy service. But do they really work? Luckily, there's now an open source tool people can use to test their setup. Every day dozens of millions of people share files using BitTorrent, willingly exposing their IP-addresses to the rest of the world. Tor Instant Messaging Bundle - A New Anonymous and Encrypted messaging Software. We are living in an era of Mass Surveillance, conducted by the Government Agencies like the NSA and GCHQ, and we ourselves gave them an open invitation as we all have sensors in our pockets that track us everywhere we go i.e. 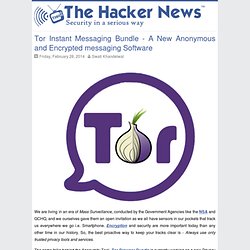 Smartphone. Encryption and security are more important today than any other time in our history. Pourquoi (et comment) le FBI s'attaque à la face cachée du Web. Google Starts Punishing “Pirate” Sites In Search Results. Google announced today that it will lower the search engine rankings of websites that receive a high number of DMCA takedown requests, independent of whether the linked content is lawful or not.

The algorithm change is the result of extensive lobbying efforts by Hollywood and the major music labels, and could severely degrade the rankings of websites such as The Pirate Bay, FilesTube, and even YouTube. Google will soon take into consideration the number of DMCA takedown notices it receives against sites to determine the ranking of those websites in its search results. How China is Blocking Tor. This study investigated how the Great Firewall of China (GFC) is blocking the Tor anonymity network. Tor is an overlay network which provides its users with anonymity on the Internet.

A more detailed explanation is available on the project website or in the design paper. EMI Boss Opposes SOPA, Says Piracy is a Service Issue. The RIAA has been one of the most dedicated supporters of the PIPA and SOPA bills, but not all of the people they represent share their enthusiasm. EMI's VP of Urban Promotions Craig Davis made some very reasonable remarks on the controversial anti-piracy plans, stating that "the method they're using is incorrect. " In addition, the VP says that he's no fan of DRM and that piracy is a service issue, not an issue of money.

In recent weeks millions of people have spoken out against the pending PIPA and SOPA anti-piracy bills, which have both been delayed as a result. Today we can add a VP at one of the major RIAA labels to this list, which is quite unique and yet another game changer. Zut Alors! French Government Deny BitTorrent Piracy Allegations. Mid-December, data from YouHaveDownloaded was used to show that several illegal downloads had taken place in the palace of French President Sarkozy. These, however, were just the tip of the iceberg. More than 250 further IP addresses belonging to the French Ministry of Culture have now been linked to illegal downloads but the government, unsurprisingly, say they are completely innocent.

RIAA and Homeland Security Caught Downloading Torrents. If there's one organization known for its crusade against online piracy, it's the RIAA. Nevertheless, even in the RIAA's headquarters several people use BitTorrent to download pirated music, movies, TV-shows and software. Torrentfreak. While most of the major entertainment industry companies wage war against BitTorrent sites, the Songwriters Association of Canada prefers to embrace file-sharing. Speaking with TorrentFreak, vice president Jean-Robert Bisaillon says that the Internet has revived the music business. Torrentfreak. One in three people in Switzerland download unauthorized music, movies and games from the Internet and since last year the government has been wondering what to do about it.

This week their response was published and it was crystal clear. Not only will downloading for personal use stay completely legal, but the copyright holders won't suffer because of it, since people eventually spend the money saved on entertainment products. In Switzerland, just as in dozens of other countries, the entertainment industries have been complaining about dramatic losses in revenue due to online piracy. In a response, the Swiss government has been conducting a study into the impact downloading has on society, and this week their findings were presented. The overall conclusion of the study is that the current copyright law, under which downloading copyrighted material for personal use is permitted, doesn’t have to change.

Anti-Piracy Group Asks Court To Order Grooveshark DNS Block. After court action in Denmark ended with the country's major Internet service providers blocking The Pirate Bay, copyright holders now have a new target in their sights. An anti-piracy group say they have sent an urgent letter to a court demanding that Grooveshark should be subjected to an ISP DNS blockade, an action which would take the site offline in Denmark.