OpenBSD manual pages. Nc — arbitrary TCP and UDP connections and listens The nc (or netcat) utility is used for just about anything under the sun involving TCP, UDP, or UNIX-domain sockets. 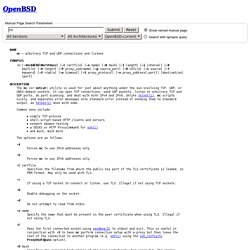 It can open TCP connections, send UDP packets, listen on arbitrary TCP and UDP ports, do port scanning, and deal with both IPv4 and IPv6. Unlike telnet(1), nc scripts nicely, and separates error messages onto standard error instead of sending them to standard output, as telnet(1) does with some. Common uses include: simple TCP proxies shell-script based HTTP clients and servers network daemon testing a SOCKS or HTTP ProxyCommand for ssh(1) and much, much more The options are as follows: Forces nc to use IPv4 addresses only. Forces nc to use IPv6 addresses only. -C certfile Specifies the filename from which the public key part of the TLS certificate is loaded, in PEM format. -c If using a TCP socket to connect or listen, use TLS.

Enable debugging on the socket. -d Do not attempt to read from stdin. Ncat - Netcat for the 21st Century. . . 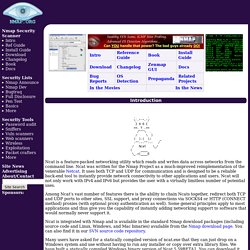 \`-"'"-'/ } 6 6 { ==. Y ,== /^^^\ . / \ ) ( )-( )/ _ -""---""--- / / Ncat \_/ ( ____ \_. =|____E Ncat is a feature-packed networking utility which reads and writes data across networks from the command line. Ncat was written for the Nmap Project as a much-improved reimplementation of the venerable Netcat. It uses both TCP and UDP for communication and is designed to be a reliable back-end tool to instantly provide network connectivity to other applications and users. Among Ncat’s vast number of features there is the ability to chain Ncats together, redirect both TCP and UDP ports to other sites, SSL support, and proxy connections via SOCKS4 or HTTP (CONNECT method) proxies (with optional proxy authentication as well).

Ncat is integrated with Nmap and is available in the standard Nmap download packages (including source code and Linux, Windows, and Mac binaries) available from the Nmap download page. Netcat for Windows. April 10, 2009 Netcat is a simple networking utility which reads and writes data across network connections using the TCP/IP protocol. 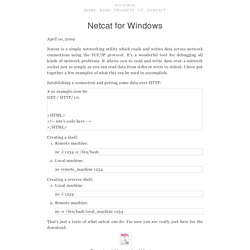 It's a wonderful tool for debugging all kinds of network problems. It allows you to read and write data over a network socket just as simply as you can read data from stdin or write to stdout. I have put together a few examples of what this can be used to accomplish. Netcat cheat sheet v1. Green Hackerz: NetCat. Hello GreenHackers.. 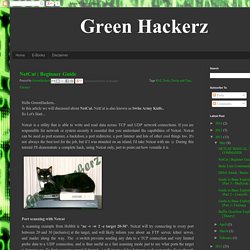 A Unix Utility You Should Know About: Netcat. This is the second post in the article series about Unix utilities that you should know about. 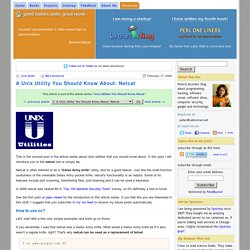 In this post I will introduce you to the netcat tool or simply nc. Netcat is often referred to as a "Swiss Army knife" utility, and for a good reason. Just like the multi-function usefulness of the venerable Swiss Army pocket knife, netcat's functionality is as helpful. Some of its features include port scanning, transferring files, port listening and it can be used a backdoor. In 2006 netcat was ranked #4 in "Top 100 Network Security Tools" survey, so it's definitely a tool to know. 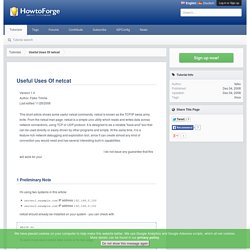 From the netcat man page: netcat is a simple unix utility which reads and writes data across network connections, using TCP or UDP protocol. It is designed to be a reliable "back-end" tool that can be used directly or easily driven by other programs and scripts. At the same time, it is a feature-rich network debugging and exploration tool, since it can create almost any kind of connection you would need and has several interesting built-in capabilities.

I do not issue any guarantee that this will work for you! Netcat. Netcat is a network utility for reading from and writing to network connections on either TCP or UDP. 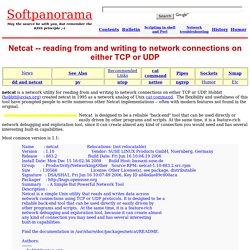 Hobbit (hobbit@avian.org) created netcat in 1995 as a network analog of Unix cat command. The flexibility and usefulness of this tool have prompted people to write numerous other Netcat implementations -- often with modern features not found in the original. Netcat is designed to be a reliable "back-end" tool that can be used directly or easily driven by other programs and scripts. At the same time, it is a feature-rich network debugging and exploration tool, since it can create almost any kind of connection you would need and has several interesting built-in capabilities. Most common version is 1.1: Among the most interesting clones under active development is socat, which extends Netcat to support many other socket types, SSL encryption, SOCKS proxies, and more. 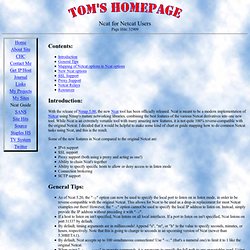 Ncat is meant to be a modern implementation of Netcat using Nmap's mature networking libraries, combining the best features of the various Netcat derivatives into one new tool. While Ncat is an extremely versatile tool with many amazing new features, it is not quite 100% reverse-compatible with the original Netcat. I decided that it would be helpful to make some kind of chart or guide mapping how to do common Netcat tasks using Ncat, and this is the result. Some of the new features in Ncat compared to the original Netcat are: IPv6 supportSSL supportProxy support (both using a proxy and acting as one!) General Tips: As of Ncat 5.20, the "-p" option can now be used to specify the local port to listen on in listen mode, in order to be reverse-compatible with the original Netcat. 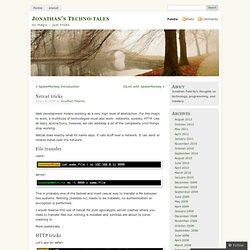 For the magic to work, a multitude of technologies must also work: networks, sockets, HTTP. Like all leaky abstractions, however, we can sidestep a lot of the complexity until things stop working. Nmap Development: Re: Your favorite Ncat/nc/Netcat trick? Nmap Development mailing list archives Re: Your favorite Ncat/nc/Netcat trick? 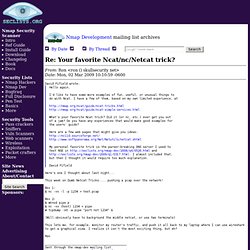 I always say that small, simple and self contained tools can often be more useful, and more feature rich than huge bloated frameworks. For example lets take legendary “Swiss Army Knife of Networking” – netcat. It is a single binary, which takes up about 60KB of space on your disk (give or take a few KB depending on where and how you compile it). What can it do? Skoudis_pentestsecrets.pdf (application/pdf Object) Netcat. NetCat tutorial: Day1 [Archive] - Antionline Forums - Maximum Security for a Connected World.