Department of Neurobiology. Millions of Americans dance, either recreationally or professionally. 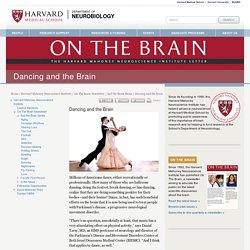 How many of those who are ballroom dancing, doing the foxtrot, break dancing, or line dancing, realize that they are doing something positive for their bodies—and their brains? Dance, in fact, has such beneficial effects on the brain that it is now being used to treat people with Parkinson’s disease, a progressive neurological movement disorder. “There’s no question, anecdotally at least, that music has a very stimulating effect on physical activity,” says Daniel Tarsy, MD, an HMS professor of neurology and director of the Parkinson’s Disease and Movement Disorders Center at Beth Israel Deaconess Medical Center (BIDMC). Eating Disorders. Listen Many kids — particularly adolescents — are concerned about how they look and can feel self-conscious about their bodies. 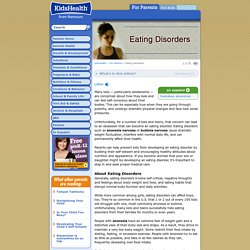 This can be especially true when they are going through puberty, and undergo dramatic physical changes and face new social pressures. Unfortunately, for a number of kids and teens, that concern can lead to an obsession that can become an eating disorder. Eating disorders such as anorexia nervosa or bulimia nervosa cause dramatic weight fluctuation, interfere with normal daily life, and can permanently affect their health. Resource Paper: Dance Fitness - International Association for Dance Medicine & Science. Resource Papers and Fact Sheets PDF Version Introduction. 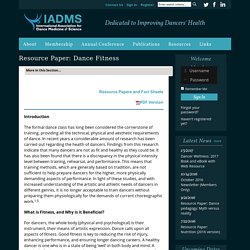 Benefits of Muscular Strength. Muscular strength refers to the power and capacity of muscles and connective tissue elements to undergo stress and strain in order to achieve a variety of activities by pulling, pushing, stretching, extending and flexing different joints of the body. 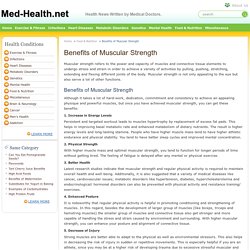 Muscular strength is not only appealing to the eye but also serve a lot of other functions. Benefits of Muscular Strength Although it takes a lot of hard-work, dedication, commitment and consistency to achieve an appealing physique and powerful muscles, but once you have achieved muscular strength, you can get these benefits: 1. Increase in Energy Levels. Growing Up Digital, Wired for Distraction. By all rights, Vishal, a bright 17-year-old, should already have finished the book, ’s “Cat’s Cradle,” his summer reading assignment. 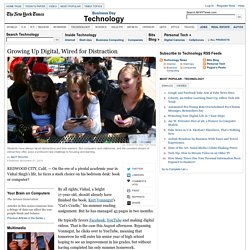 But he has managed 43 pages in two months. He typically favors , and making digital videos. That is the case this August afternoon. Students can't resist distraction for two minutes ... and neither can you. Are gadgets making us dumber? 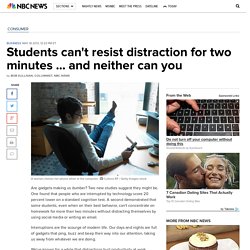 Two new studies suggest they might be. One found that people who are interrupted by technology score 20 percent lower on a standard cognition test. A second demonstrated that some students, even when on their best behavior, can't concentrate on homework for more than two minutes without distracting themselves by using social media or writing an email. Interruptions are the scourge of modern life. Our days and nights are full of gadgets that ping, buzz and beep their way into our attention, taking us away from whatever we are doing. What is Cyberbullying. Cyberbullying is bullying that takes place using electronic technology. 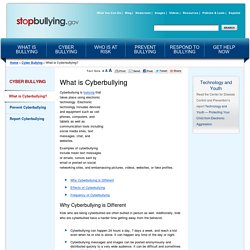 Electronic technology includes devices and equipment such as cell phones, computers, and tablets as well as communication tools including social media sites, text messages, chat, and websites. Examples of cyberbullying include mean text messages or emails, rumors sent by email or posted on social networking sites, and embarrassing pictures, videos, websites, or fake profiles. Health and Technology — Digital Responsibility. Technology can have a large impact on users' mental and physical health. 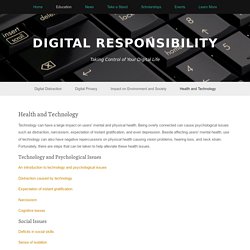 Being overly connected can cause psychological issues such as distraction, narcissism, expectation of instant gratification, and even depression. Beside affecting users' mental health, use of technology can also have negative repercussions on physical health causing vision problems, hearing loss, and neck strain. Fortunately, there are steps that can be taken to help alleviate these health issues. The Impact of Technology on Healthcare. Technology today affects every single aspect of modern society. 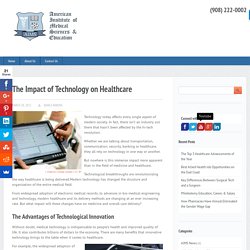 In fact, there isn’t an industry out there that hasn’t been affected by the hi-tech revolution. Whether we are talking about transportation, communication, security, banking or healthcare, they all rely on technology in one way or another. The Lance : Does cell phone use really affect our communication skills? Grad student discusses effects of technology on interpersonal communication. Last weekend, a friend of mine was having trouble getting a text message to send. 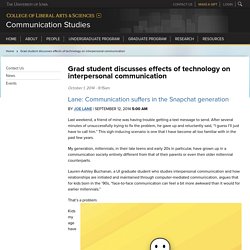 After several minutes of unsuccessfully trying to fix the problem, he gave up and reluctantly said, “I guess I’ll just have to call him.” This sigh-inducing scenario is one that I have become all too familiar with in the past few years. My generation, millennials, in their late teens and early 20s in particular, have grown up in a communication society entirely different from that of their parents or even their older millennial counterparts. Lauren-Ashley Buchanan, a UI graduate student who studies interpersonal communication and how relationships are initiated and maintained through computer-mediated communication, argues that for kids born in the ’90s, “face-to-face communication can feel a bit more awkward than it would for earlier millennials.”

Negative Effects of Technology on Communication. The Positive and Negative Impacts Technology Has on Our Daily Lives. Many of us have become very dependent on technology as it plays a very important role in our daily lives. After reading through an interesting article I found online ( I realized that the author was correct about technology having both positive and negative impacts as it pertains to the way we communicate. We never really acknowledge the way technology has evolved over the years and how much it has both helped and hurt us.

Using the term “hurt” to describe the negative impact of technology may be a bit much, but I think it sums it up rather well. Just think about how technology has made it possible to communicate with people all over the world through email, instant messaging, Skype, social media, etc. In many ways technology has enabled us to strengthen relationships by keeping in contact with old friends, colleagues, and co-workers.