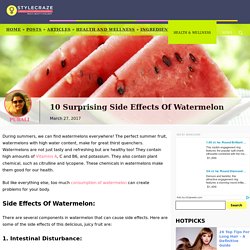 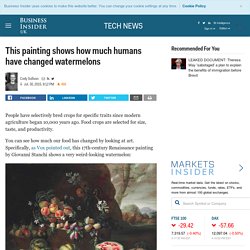 Food crops are selected for size, taste, and productivity. You can see how much our food has changed by looking at art. Specifically, as Vox pointed out, this 17th-century Renaissance painting by Giovanni Stanchi shows a very weird-looking watermelon: A Giovanni Stanchi painting shows how different watermelon looked about 500 years ago CHRISTIE'S IMAGES LTD. 2015 The watermelon's insides are pale, full of seeds, and not very fleshy. So how did the watermelon morph from that strange whirly melon into today's juicy red version? This process of selective breeding has been used for all sorts of fruit. The peach, for instance, went from a small cherry-like fruit that wasn't too fleshy into the big juicy pinkish fruit we eat today.

Those breeders would then cross pollinate plants with those desirable traits to hopefully get a larger and flavorful peach, which eventually they did. The 5,000-Year Secret History of the Watermelon. To taste a watermelon is to know “what the angels eat,” Mark Twain proclaimed. 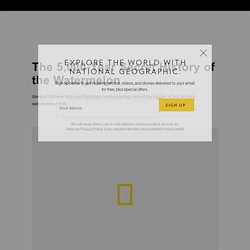 The angels, however, would have gagged if they had eaten the watermelon’s wild ancestor—a bitter fruit with hard, pale-green flesh. Generations of selective breeding, spanning several countries and cultures, produced the sweet red fruit that’s now a common sight on picnic tables. Much of this epic history has been lost to antiquity. But Harry Paris, a horticulturalist at the Agricultural Research Organization in Israel, has spent years assembling clues—including ancient Hebrew texts, artifacts in Egyptian tombs, and medieval illustrations—that have enabled him to chronicle the watermelon’s astonishing 5,000-year transformation. Who’s Your Daddy? Scientists agree that the watermelon’s progenitor—the ur-watermelon, if you will—was cultivated in Africa before spreading north into Mediterranean countries and, later, to other parts of Europe.

But, that’s where the consensus ends. Pharaonic Fruit Hitting the Road.