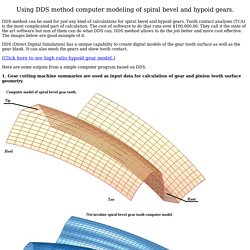 DDS method can be used for just any kind of calculations for spiral bevel and hypoid gears. Tooth contact analyses (TCA) is the most complicated part of calculation. The cost of software to do that runs over $100,000.00. They call it the state of the art software but non of them can do what DDS can. DDS method allows to do the job better and more cost effective. DDS (Direct Digital Simulation) has a unique capability to create digital models of the gear tooth surface as well as the gear blank. (Click here to see high ratio hypoid gear model.) Here are some outputs from a simple computer program based on DDS. 1. DDS allows calculating as many surface points as necessary for a regular tooth profile as well as for any other profiles. DDS can take theoretical tooth surface data from #1 or data taken from mesuring gear and pinion tooth surfaces on CMM. 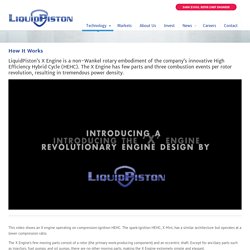 The X Engine has few parts and three combustion events per rotor revolution, resulting in tremendous power density. This video shows an X engine operating on compression-ignition HEHC. The spark-ignition HEHC, X Mini, has a similar architecture but operates at a lower compression ratio. The X Engine’s few moving parts consist of a rotor (the primary work-producing component) and an eccentric shaft. LiquidPiston’s X Engine architecture geometry allows for standard materials and 2-D manufacturing to be used, greatly decreasing the design, build and testing cycle. While it is a rotary engine, LiquidPiston’s X Engine is NOT a Wankel engine. Spiral bevel gear - Wikipedia. A spiral bevel gear set should always be replaced in pairs i.e. both the left hand and right hand gears should be replaced together since the gears are manufactured and lapped in pairs. 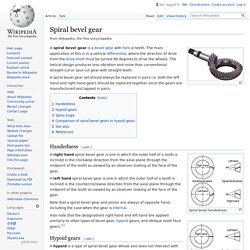 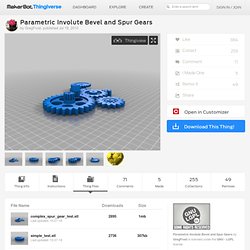 It has some major enhancements over my original gear script thingiverse.com/thing:3534. It uses some of the spur gear nomenclature code from TheOtherRob github.com/TheOtherRob/MCAD with my own code for generating the involute teeth. The bevel gear is also my own work. Thanks also to elmom for some enhancements to my original gear script thingiverse.com/thing:3547. Enhancements include the Bevel gear module, backlash settings, parameterised number of facets for the involute curve and whole of tooth generation to avoid some of the issues the original script had when mirroring a half tooth.

The STLs provided are not intended for direct use, but instead show examples of what can be done with the parametric script. Update: v5.0 Implements backlash for bevel gears (This was not working in v4.0). Guitar string winder by smcameron. Cilgwyn/Penrhyn quarry "Lilla" (009) (MYZQF7CEF) by ROBEX.