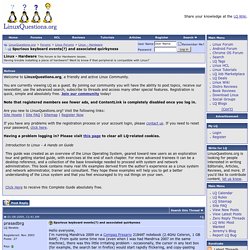 From quite some time now (even when I was had Mandriva 2007 on the same machine), there was this little irritating problem - occasionally, the cursor in any text box (for example, the search bar in firefox) would start rapidly flickering, and copy-pasting would behave erratically, i.e. ctrl-c ctrl-v over selected text would not ensure that the selected text gets pasted. The flickering would dissappear, though, the moment I typed anything from the keyboard - so the problem wasn't so serious (still, irritating!).

At the time, I had 512MB + 128MB (2 slots) of RAM. I recently upgraded the OS to Mandriva 2009. I'd hoped that the niggling issue would dissappear, but it didn't - perhaps marginally reduced, but still present. The problem went from irritating to serious when I recently started using the SPE Python editor. I checked the ASCII table, and found that 013 is "Vertical Tab". BeagleBoardRecovery. This page is how to recover ("unbrick") a broken BeagleBoard. 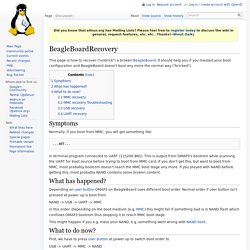 It should help you if you messed your boot configuration and BeagleBoard doesn't boot any more the normal way ("bricked"). Normally, if you boot from MMC, you will get something like in terminal program connected to UART (115200 8N1). This is output from OMAP3's bootrom while scanning the UART for boot source before trying to boot from MMC card. If you don't get this, but want to boot from MMC, most probably bootrom doesn't reach the MMC boot stage any more. Depending on user button OMAP3 on BeagleBoard uses different boot order. In this order. 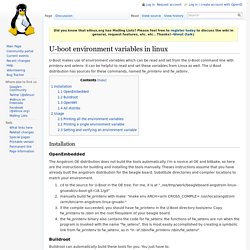 It can be helpful to read and set these variables from Linux as well. The U-Boot distribution has sources for these commands, named fw_printenv and fw_setenv. Installation. UART. A common CP2102 3.3V capable USB UART module A UART or serial console is absolutely essential when doing bootloader or kernel development on any computer. 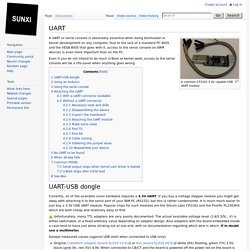 Due to the lack of a standard PC BIOS and the VESA BIOS that goes with it, access to the serial console on ARM devices is even more important than on the PC. Even if you do not intend to do much U-Boot or kernel work, access to the serial console will be a life-saver when anything goes wrong. Currently, all of the available sunxi hardware requires a 3.3V UART. If you buy a voltage stepper module you might get away with attaching it to the serial port of your IBM PC (RS232), but this is rather cumbersome. Unfortunately, many TTL adapters are very poorly documented. Beagleboard VGA output. This article describes how you can extract a VGA signal from the LCD headers on a revision C beagleboard using two transistors and a bunch of resistors. 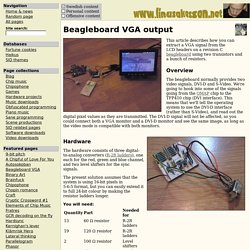 Overview. Beagleboard - [beagleboard] Re: touchscreen driver (for LCD7) - msg#00111. Maybe this will be helpful to others facing the same problem with debian:here is what I had to do to be able to run ts_utilities (ts_calibrate, ts_test, etc.) on BBB + LCD7 cape with debian rootfsfirst off all, libts-bin is a debian package. 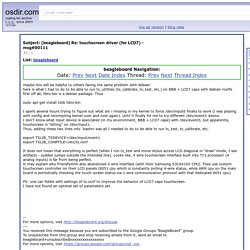 Thus sudo apt-get install tslib libts-bin I spent several hours trying to figure out what am i missing in my kernel to force /dev/input0 finally to work (i was playing with config and recompiling kernel over and over again). BeagleSoftCompile - beagleboard - Beagle Board Software Compilation Procedure. - Low-cost, low-power single-board computer. Richardeoin/ftx-prog. ModifyFTDIFirmwareWithLinux - libcomm14cux - How to invert the FTDI device's RxD line if using Linux - Library for serial communications with the 14CUX engine management system.

As an alternative to the Windows-only FT_PROG utility from FTDI, the Linux utility ft232r_prog can be used to perform the same function. 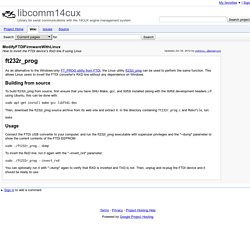 This allows Linux users to invert the FTDI converter's RXD line without any dependence on Windows. Building from source To build ft232r_prog from source, first ensure that you have GNU Make, gcc, and libftdi installed (along with the libftdi development headers.) If using Ubuntu, this can be done with: BeagleNANDFlashing - beagleboard - To Flash NAND on BeagleBoard - Low-cost, low-power single-board computer. 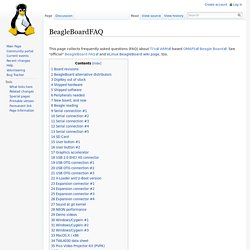 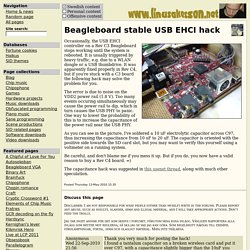 It is usually triggered by heavy traffic, e.g. due to a WLAN dongle or a USB thumbdrive. It was apparently fixed properly in Rev C4, but if you're stuck with a C3 board the following hack may solve the problem for you. The error is due to noise on the VDD2 power rail (1.8 V). Too many events occuring simultaneously may cause the power rail to dip, which in turn causes the USB PHY to panic. 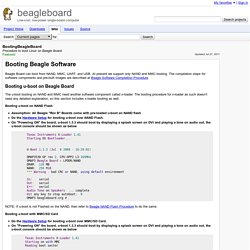 At present we support only NAND and MMC booting. The compilation steps for software components and pre-built images are described at Beagle Software Compilation Procedure. BeagleBoard Community. This page collects information about BeagleBoard.org's open hardware embedded computer boards based on TI's ARM processors. Most of this material is applicable to the BeagleBoard and BeagleBoard-xM. The BeagleBone and BeagleBone Black from the same company employ a different SoC and are described on the BeagleBone page. HOWTO: Ubuntu on the BeagleBoard. This post is more to gather information that’s spread over a few different pages all into one place, so if I need to do it again from scratch I’ve got an easy reference to follow. I’m running on Mac OS X as my primary operating system, and whilst it’s Unix, it’s not Linux so some of the development tools needed to get the beagleboard up and running either are outdated ports or don’t exist.

As a result, I started out with creating a vm using Ubuntu Server 9.04 x64 in VMware Fusion. I performed a basic install into the VM, accepting most of the the default settings – 1 CPU, 512 MB RAM, 20GB SCSI HDD. The one setting I changed was to use Bridged networking rather than NAT. During the installation of Ubuntu, the only set of pre-configured packages I selected was the OpenSSH Server. Once Ubuntu was installed, the first thing I did was to set up a static IP address and configure passwordless logins for ssh. Once this is done, you can ssh in from the host operating system. Saveenv. Auto login on a BBB w/ Debian Wheezy - Google Groups.

BeagleBoardNAND. This page is about using (booting/running from) NAND memory on BeagleBoard. Parts of this page are inspired by Steve's flash procedure document. Flashing the BeagleBoard – Student Robotics. BeagleBoardBeginners. This is the "community" beginners guide for TI's ARM based OMAP3 Beagle Board. For "official" beginners guide see My Beagle Board Out of the box experience.

If something doesn't work or isn't covered in these guides, please feel free to ask at IRC or mailing list. But before you ask there, make sure you read the FAQs. BeagleBoardDebian. BeagleBoard Community.