The biggest scandals to ever hit Starbucks. During the holiday season, Starbucks is known for two things: extra sugary seasonal drinks, and cups that celebrate the Christmas spirit. 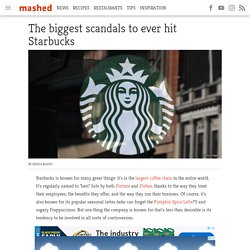 But in 2015, the company decided to take a more non-denominational stance with their cups. Instead of doing a Christmas-themed design, they debuted simple red cups. In a statement about the cups, the vice president of the company, Jeffrey Fields, said, "In the past, we have told stories with our holiday cups designs. This year we wanted to usher in the holidays with a purity of design that welcomes all of our stories. " Some customers, however, were not pleased. Even then-presidential candidate Donald Trump weighed in on the issue, saying "I have one of the most successful Starbucks, in Trump Tower. During the holiday season, Starbucks is known for two things: extra sugary seasonal drinks, and cups that celebrate the Christmas spirit. Some customers, however, were not pleased. 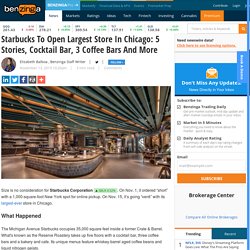 On Nov. 1, it ordered “short” with a 1,000-square-foot New York spot for online pickup. On Nov. 15, it’s going “venti” with its largest-ever store in Chicago. What Happened. Starbucks' Cool New Brew: Storytelling With A Digital Twist. While many leaders search for the latest marketing strategy to grow their brands, Starbucks wins people over by adding a digital twist to old-fashioned storytelling. 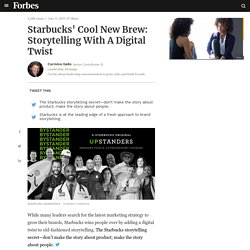 The Starbucks storytelling secret—don’t make the story about product; make the story about people. Storytelling is core to Starbucks’ success, and it starts at the top with the company’s chief storyteller, executive chairman Howard Schultz. Schultz is one of the best brand storytellers I’ve ever met. For more than 30 years, Schultz has re-told the now famous origin story of the trip to Italy that inspired him to turn a coffee roasting company into a “third place” between work and home. Schultz often tells another origin story—the story about his father’s struggle to care for his family when he lost his job. Schultz has teamed up with a career storyteller to take the brand into new and exciting content directions. Linkedin. Starbucks TV Commercial, 'A Year of Good' Starbucks TV Spot, 'A Year of Good' Submissions should come only from the actors themselves, their parent/legal guardian or casting agency. 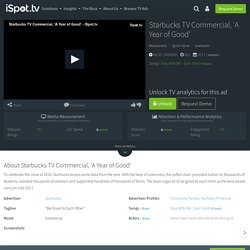 Please include at least one social/website link containing a recent photo of the actor. Submissions without photos may not be accepted. Voice over actors: provide a link to your professional website containing your reel. Submit ONCE per commercial, and allow 48 to 72 hours for your request to be processed. Add Actor/Actress Details. Starbucks Nitro Cold Brew TV Commercial, 'Whoa Nitro' Song by Jungle. Starbucks Nitro Cold Brew TV Spot, 'Whoa Nitro' Song by Jungle Submissions should come only from the actors themselves, their parent/legal guardian or casting agency. 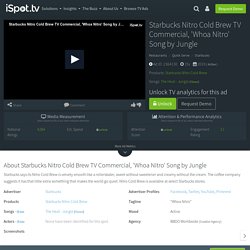 Please include at least one social/website link containing a recent photo of the actor. Submissions without photos may not be accepted. Voice over actors: provide a link to your professional website containing your reel. Submit ONCE per commercial, and allow 48 to 72 hours for your request to be processed. Add Actor/Actress Details. Starbucks' Social Media Strategy - What Brands Can Learn from Starbucks. THE IMPORTANCE OF FEEDBACK: Lessons from Starbucks. This is part of a multi-part series of articles for Funeral Business Advisor applying the successful principles of Starbucks management to the funeral profession. 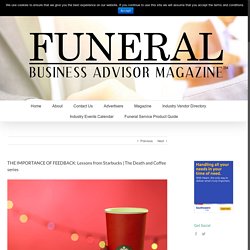 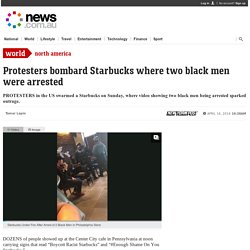 According to the New York Post, the protest came after a video posted by writer Melissa DePino, showed two black men being handcuffed and paraded out of the shop in Philadelphia — as other customers repeatedly asked: ‘What did they do?” Police Commissioner Richard Ross said Starbucks employees called 911 to say the men were trespassing. The men had reportedly refused to leave after being told they couldn’t use the bathroom if they didn’t buy anything — in violation of Starbucks policy. The men had just been waiting to meet a real estate developer named Andrew Yaffe to discuss investment opportunities, their lawyer, Lauren Wimmer later told The Washington Post. Former Starbucks CEO Howard Schultz decides against running for president. Howard Shultz, the former Starbucks CEO who had been weighing an independent presidential bid, announced Friday that he will not run for president. 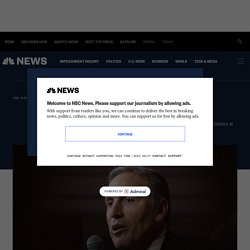 “My belief in the need to reform our two-party system has not wavered, but I have concluded that an independent campaign for the White House is not how I can best serve our country at this time,” Schultz said in statement. Schultz added that the money he would have allocated to a campaign “will instead be used to invest in people, organizations and ideas that promote honesty, civility and results in our politics, and that move the country beyond two-party gridlock.” Schultz announced in January that he was exploring a run for president as an independent. But his presidential ambitions were widely criticized by Democrats concerned that his bid would end up helping President Donald Trump retain control of the White House.

In April, Schultz announced he would be taking a break from his exploratory campaign as he recovered from back surgery. Quality Vs. Quick Service: The Difference Between Starbucks And McDonald's. Starbucks‘ recently acknowledged that it is facing operating issues in handling the huge volume of orders generated by the success of its Mobile Order & Pay app. 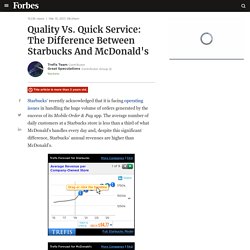 The average number of daily customers at a Starbucks store is less than a third of what McDonald’s handles every day and, despite this significant difference, Starbucks’ annual revenues are higher than McDonald’s. The reason for Starbucks’ higher revenues despite a lower volume of customers is that the average spend per customer visit at a Starbucks store is almost three times that of a customer at a McDonald’s restaurant. Starbucks’ business model is aimed at high spending customers and, hence, its stores are geared for a lower daily volume, compared to McDonald’s quick service format. McDonald’s is working on a transformation and introducing more “gourmet” menu items, which should increase the average customer spend per visit.

That said, its model is not comparable with Starbucks. Starbucks. Corporate Social Impact. As we have grown to more than 28,000 stores in more than 75 countries, so too has our commitment to creating a positive global social impact. 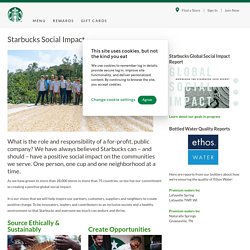 It is our vision that we will help inspire our partners, customers, suppliers and neighbors to create positive change. To be innovators, leaders and contributors to an inclusive society and a healthy environment so that Starbucks and everyone we touch can endure and thrive. Source Ethically & Sustainably We are committed to offering high-quality, ethically purchased and responsibly produced products.Create Opportunities We are committed to investing in paths to opportunity through education, training and employment.Lead in Green Retail We are committed to minimizing our environmental footprint and inspiring others to do the same.Strengthen Communities.

This Theory Of Why Starbucks Misspells Your Name Is Pretty Smart. In an interview with Cosmopolitan, one unnamed assistant manager told the magazine they did in fact misspell names to promote the coffee chain. All Brand Rankings where Starbucks is listed! Starbucks. Starbucks Company Recognition. Starbucks - 1,808 Photos - Food & Beverage Company - Starbucks Coffee (@Starbucks) Starbucks. The Coffee Bean & Tea Leaf.