Alchemy Architects. Alchemy Architects. SLI Prefab System for Modern Mid Rises. This is a prototype apartment unit built using what is likely the only fabrication system on the market that can be scaled to construct mid-rise buildings. 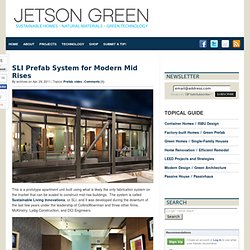 The system is called Sustainable Living Innovations, or SLI, and it was developed during the downturn of the last few years under the leadership of CollinsWoerman and three other firms, McKinstry, Lydig Construction, and DCI Engineers. The SLI model or prototype was constructed in a warehouse in south Seattle. This would be the fourth floor of something like a six-story building. As you can see, it’s quite open and modern in its details and finishes. “SLI offers an attractive design and use of materials. An SLI building would be designed to achieve at least LEED Silver, but that’s not all this is about. Though we’ve seen prefab construction outside of the single-family context, such as with The Modules, this system is slightly different. Credits: Doug Scott (#1-2), CollinsWoerman (#3). 6 Hours + 2 Adults = 1 Post-Disaster Prefab 5-Person Home. It is more like an oversized IKEA process than a do-it-yourself house project, able to be assembled in a short period of time with just a few workers using simple instructions and correspondingly uncomplicated tools to execute its surprisingly elegant plan. 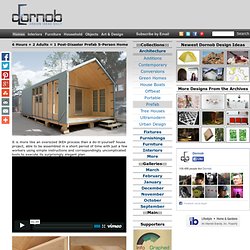 Designed by Finnish students from the Alto Wood Program, this work does their regional material of choice (wood) and their program’s namesake (Alvar Alto) proud, with a practical but comfortable and dynamic interior. Meanwhile, setting it up is a cinch – modular plywood panels, prefabricated and shipped to site, attach via wooden dowels and nylon straps that (remarkably) negate any need for metal fasteners or electric tools and actually form an airtight seal at joints. A space-saving galley kitchen attaches to a mixed-use dining, living and working area, while spare lofts above semi-private bedrooms double as storage or extra sleeping spaces. The roof also extends to shelter a limited zone of exterior square footage as well. Tind prefabricated house concept by Claesson Koivisto Rune.

Milan 2013: Swedish architects Claesson Koivisto Rune will present a kit-of-parts for a prefabricated Scandinavian house in Milan this April (+ slideshow). 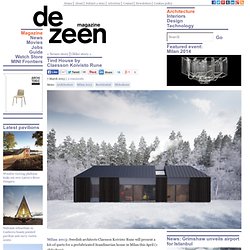 "The prefab/kit house market generally prefers fake historical over contemporary," says Claesson Koivisto Rune, "and it is more than common that an architect has not been involved at all. " The team was keen to avoid this conservative approach and wanted to come up with a modern design that reflected current Swedish architecture. With Tind House, they developed distinctive contemporary details for the roof shape, windows and doors of the flexible system, which can be constructed as a single-storey residence for a couple or a family home with two or three floors. Each house features a roof with a gentle incline to match the housing vernacular in Sweden. The peak of the roof is flat, which the designers compare to the profiles of the Scandinavian Mountains. Images are by Peter Guthrie. Modern timber-frame architecture in wood and glass: - HUF HAUS.

Anderson Anderson Architecture. Packaged House by Konrad Wachsmann and Walter Gropius (1941-1952) at Housing.com. Rather than representing a revolution in prefabrication, Konrad Wachsmann and Walter Gropius's Packaged House (General Panel System) represents the zenith of the wood-frame, panelized houses that were, by 1942, fairly common on both sides of the Atlantic. 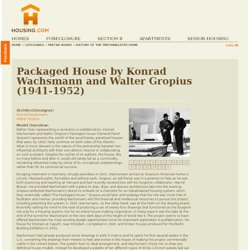 What is more relevant is the nature of the partnership between two influential architects with their own distinct interest in collaborating on such a project. Despite the cachet of its authors, the house, like so many before and after it, would ultimately fail as a commodity, remaining influential today by virtue of its conceptual underpinnings, rather than for its commercial success. Escaping interment in Germany virtually penniless in 1941, Wachsmann arrived at Gropius's American home in Lincoln, Massachusetts, homeless and without work. 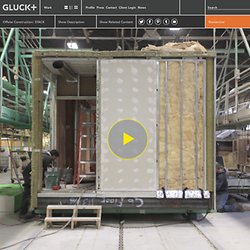 He became associate principal in 1999. As the lead housing architect in our office, Mr. Kaplan, AIA LEED certified, has been involved in the design of sustainable housing projects throughout the U.S. Digital Fabrikation - eentileen. Facit Homes. Home Delivery: Fabricating the Modern Dwelling. FlatPak. Cellophane House. Cellophane House is a five-story, off-site fabricated dwelling made of transparent, recyclable materials commissioned by The Museum of Modern Art for the 2008 exhibition Home Delivery: Fabricating the Modern Dwelling. 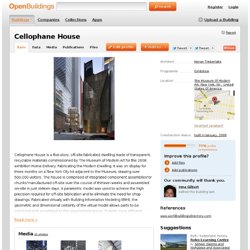 It was on display for three months on a New York City lot adjacent to the Museum, drawing over 500,000 visitors. The house is comprised of integrated component assemblies"or chunks"manufactured off-site over the course of thirteen weeks and assembled on-site in just sixteen days. A parametric model was used to achieve the high precision required for off-site fabrication and to eliminate the need for shop drawings.

Fabricated virtually with Building Information Modeling (BIM), the geometric and dimensional certainty of the virtual model allows parts to be machined and assembled to the required tolerances.