AATranslator - Home Page. About. Peter Dines: Desert Island Plugins: The Best Virtual Instruments. I have too many instrument plugins, like anyone else who uses a DAW.

Some are free, some are paid, and put them all together and ya got options paralysis. So I decided to get out the pruning shears. Here's what I consider the top plugin instruments, the ones I can't do without: Reaktor. Twisted Tools. ULTRALOOP is a first-of-its-kind loop remixing sampler with a fast and intuitive visual workflow for Native Instruments *Reaktor. 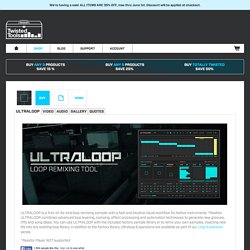 ULTRALOOP combines advanced loop layering, comping, effect processing and automation techniques to generate new grooves, riffs and song ideas. You can use ULTRALOOP with the included factory sample library or to remix your own samples, injecting new life into any existing loop library. In addition to the factory library, Ultraloop Expansions are available as part of our Loop Expansion series. *Reaktor Player NOT supported. Plugins. The 54 best VST/AU plugin synths in the world today. There's no denying that there's been a boom in hardware synth sales over the past couple of years - particular of affordable analogue ones - but if you want to benefit from great sound, convenience and tight integration with your DAW, it's hard to argue with what the best of today's plugin synths have to offer.

Sure, many of the cutting-edge instruments impose a considerable CPU hit, and others are either clearly-labelled or thinly-veiled emulations of hardware synths from the past, but being able to call upon a vast range of incredible synths with just a click of a mouse remains a joy, and something that no one who started making electronic music in the pre-VSTi/AU days will ever take for granted. What follows is our guide to the 54 best VST, AU and other native format plugin synths in the world today. Compiled over the course of several years, it’s been updated to reflect the market in 2014, and is bigger and better than ever.

SynthMaster 2.6: Award Winning All-Around VST AU AAX Software Synthesizer. Using VST Instruments. VST Instruments can create a huge variety of sounds from the comfort of your MIDI + Audio sequencer, but can also be a source of confusion for many computer users. Martin Walker answers the most common questions, and provides advice about automation, timing, and sound quality. A couple of years ago musicians would have laughed if you had told them that classic synths would be successfully re-created in software form and sold at a fraction of the original price. They would have been even less likely to believe that you might have half a dozen or more of them neatly integrated into your favourite MIDI + Audio sequencer to be summoned at will. Yet VST Instruments do exactly this -- and with the likes of the Minimoog, TB303, TR808, Prophet Five, PPG Wave and Mellotron already available, it's hardly surprising that they're proving extremely popular. 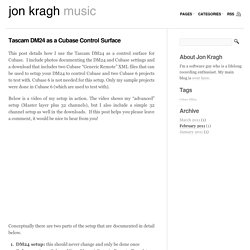 I include photos documenting the DM24 and Cubase settings and a download that includes two Cubase “Generic Remote” XML files that can be used to setup your DM24 to control Cubase and two Cubase 6 projects to test with. Cubase 6 is not needed for this setup. Only my sample projects were done in Cubase 6 (which are used to test with). Below is a video of my setup in action.

The video shows my “advanced” setup (Master layer plus 32 channels), but I also include a simple 32 channel setup as well in the downloads. Conceptually there are two parts of the setup that are documented in detail below. Avisynth wiki. AudioTools Modules. Impulse Response Smaart® Tools Transfer Function STI-PA Module Pricing AudioTools includes a base set of apps in the initial purchase price, and then has a number of optional modules that you can purchase from within AudioTools at any time as in-app purchases. 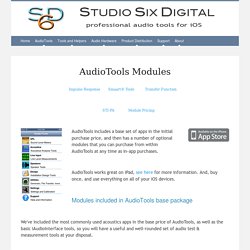 AudioTools works great on iPad, see here for more information. And, buy once, and use everything on all of your iOS devices. Modules included in AudioTools base package We've included the most commonly used acoustics apps in the base price of AudioTools, as well as the basic iAudioInterface tools, so you will have a useful and well-rounded set of audio test & measurement tools at your disposal. Software for Windows. SigmaTizm Version 1 Download SigmaTizm Version 1 for Windows 7/Vista/XP SP2+ (5.4 MB) Click here to buy the full version of SigmaTizm ($9.99) SigmaTizm is also available for Ubuntu Linux via the Ubuntu Software Center. 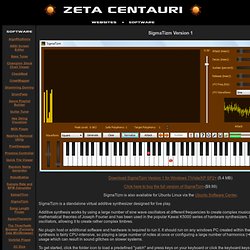 SigmaTizm is a standalone virtual additive synthesizer designed for live play. Additive synthesis works by using a large number of sine wave oscillators at different frequencies to create complex musical timbres. No plugin host or additional software and hardware is required to run it. To get started, click the folder icon to load a predefined "patch" and press keys on your keyboard or click the keyboard keys with your mouse to play sound. Current Features: Demo Version Restrictions: - Cannot save new patches. - Polyphony limited to one note. The Best Free Synths-Les Meilleurs Synthés Gratuits. Sound Browsers. Tonespace 2.0 chorder. What is tonespace? 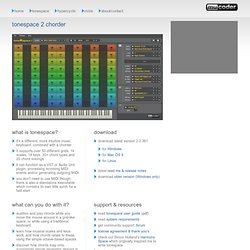 It's a different, more intuitive music keyboard, combined with a chorder It supports over 50 different grids, 14 scales, 18 keys, 30+ chord types and 25 chord voicings it can function as a VST or Audio Unit plugin, processing incoming MIDI events and/or generating outgoing MIDI you don't need to use MIDI though: there is also a standalone executable which contains its own little synth for a fast start what can you do with it? Audition and play chords while you move the mouse around in a grid-like space, or while using a traditional keyboard learn how musical scales and keys work, and how chords relate to these, using the simple octave-based spaces discover how chords map onto surprisingly simple geometric shapes in the more advanced spaces use chord-generation algorithms to fit chords to scales and keys automatically trigger chords from monophonic midi input and record the played chords using midi output.