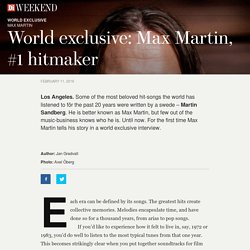 ”Well, I can only say what I think. I think that a great pop song should be felt when you hear it. You can hear songs that are technically great, songs that tick all the boxes. But for a song to be felt, you need something else. It’s incredibly important to me that you remember a song right after the first or second time you hear it. Your songs are deceptively simple. ”Exactly.

There shouldn’t be too much information in the overall sound. And how do you achieve that? ”It differs from case to case. This might be a really hard question, but how, exactly, do you build a song? ”All these questions are really hard!” Do you work chronologically – do you begin with the intro? ””Again, it depends.

Max Martin thinks for a bit before adding: ”That’s really true for all songs. Each and every artist I’ve talked to about the way you work, from Britney and Brian & AJ from Backstreet Boys to Katy Perry to Pink, all mention how intensely you work on their singing. Composer David Cope and the computer that composed music. Composer David Cope has a knack for describing music in the least romantic terms possible. 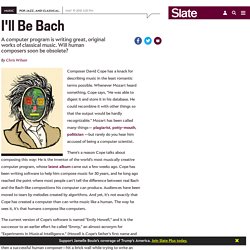 Whenever Mozart heard something, Cope says, "He was able to digest it and store it in his database. He could recombine it with other things so that the output would be hardly recognizable. " Mozart has been called many things— plagiarist, potty-mouth, politician —but rarely do you hear him accused of being a computer scientist.

There's a reason Cope talks about composing this way: He is the inventor of the world's most musically creative computer program, whose latest album came out a few weeks ago. Cope has been writing software to help him compose music for 30 years, and he long ago reached the point where most people can't tell the difference between real Bach and the Bach-like compositions his computer can produce. The results were predictably unlistenable. Cope built a huge database of existing music, beginning with hundreds of Bach chorales that he tediously coded by hand. Cool jazz soloing technique - the Cantus Firmus Method [ AN's Bass Lessons #20 ] John Mclaughlin - Discography (105 Cd Releases) 1969-2010 Mp3 скачать бесплатно песню, музыка mp3. 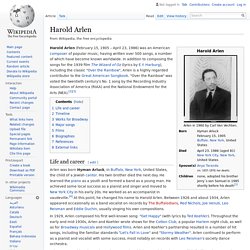 His twin brother died the next day. He learned the piano as a youth and formed a band as a young man. He achieved some local success as a pianist and singer and moved to New York City in his early 20s. He worked as an accompanist in vaudeville.[4] At this point, he changed his name to Harold Arlen. Arlen's compositions have always been popular with jazz musicians because of his facility at incorporating a blues feeling into the idiom of the conventional American popular song. Arlen was a longtime friend and former roommate of actor Ray Bolger, who starred in The Wizard of Oz. Timeline[edit] Works for Broadway[edit] Major songs[edit] Films[edit] 2003 – Stormy Weather: The Music of Harold Arlen. 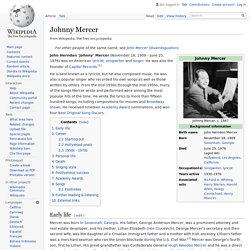 He was also the founder of Capitol Records.[1] He is best known as a lyricist, but he also composed music. Milk Cow Blues Part I Overview and Progression. Online - Music Theory Online - Musical Instrument Ranges & Names. Sound Design. Paul Nordquist's Unruly Beast of a Songblog. Great String Parts On A Budget. Technique : Composing / Arranging Whether you're recording real players or using samples, our in-depth guide is your key to polished and authentic-sounding strings. 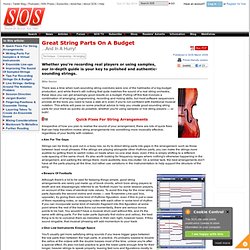 Mike Senior There was a time when lush-sounding string overdubs were one of the hallmarks of a big-budget production, and while there's still nothing that quite matches the sound of a real string orchestra, these days you can get amazingly good results on a budget. Pulling off this feat involves a combination of arranging, programming, recording and mixing skills, but most software sequencers provide all the tools you need to have a stab at it, even if you're not confident with traditional musical notation.

This article will pass on some practical advice to help you create good-sounding string parts for your track as quickly as possible, whether you're using samples or live string players — or both! Quick Fixes For String Arrangements Aim For The Gaps Beware Of Footballs Give Low Instruments Enough Space All Players Are Not Equal.