Student from Ben Lomond Designs and Builds a Bicycle-powered Loom. Only a few high school juniors would want to build a bicycle-powered weaving loom from scratch, and insist on doing so after his teacher told him repeatedly it would not work. 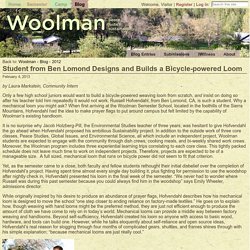 Russell Hofvendahl, from Ben Lomond, CA, is such a student. Why a mechanical loom you might ask? When first arriving at the Woolman Semester School, located in the foothills of the Sierra Mountains, Hofvendahl had the idea to make prayer flags to put around campus but felt limited by the capability of Woolman’s existing handloom. It is no surprise why Jacob Holzberg-Pill, the Environmental Studies teacher of three years, was hesitant to give Hofvendahl the go ahead when Hofvendahl proposed his ambitious Sustainability project. In addition to the outside work of three core classes, Peace Studies, Global Issues, and Environmental Science, all which include an independent project, Woolman students are expected to engage with the community through dish crews, cooking meals, and bi-weekly shared work crews. Making A Power Loom. Making A Power LoomThis automatic device will weave cloth. 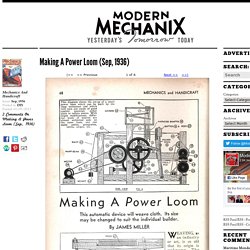 Its size may be changed to suit the individual builder.By JAMES MILLERWEAVING, as an industry or art, is so old that its origin is unknown. The most ancient example of weaving of which we know is a flax-like cloth found in the ruins of the Swiss lake dwellings, supposedly of the Stone Age. The process by which threads of any substance are interlaced to form a continuous web is weaving; the simplest form consists of one set of long fibers placed side by side —the warp—across which another set of fibers—the woof, or filling—are interlaced at right angles, the woof threads being passed under and over the warp threads alternately.In this article we are concerned with the construction of the latest type of a small, simple motor-driven loom for the home.In almost every country of the world old-fashioned hand-loom weaving is carried on in many homes, either for pleasure or profit.

Tutorials > Beaded Chain for Kumihimo Projects. Kumihimo on a Maru Dai.PDF - Kumihimo_on_a_Maru_Dai.pdf. Maru_Yatsu_Kumi_Disk.pdf. Heart Kumihimo Pattern. We will need: 16 strings (13 black and 3 pink) about 20 cm longer than your wrist circumference + some for tying the bracelet. 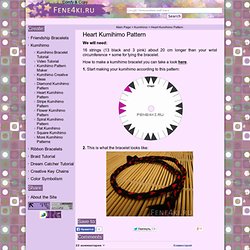 How to make a kumihimo bracelet you can take a look here. 1. Start making your kumihimo according to this pattern: 2. Save to: Comments: Japanese Braiding Instructins. There are hundreds of different kumihimo stitches, some simple and some very complex, using different numbers of strands. 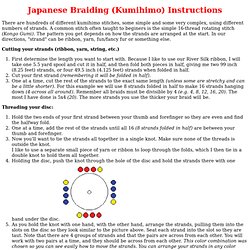 A common stitch often taught to beginers is the simple 16-thread rotating stitch (Kongo Gumi). The pattern you get depends on how the strands are arranged at the start. In our directions, "strand" can be ribbon, yarn, fun/fancy fur or something else. Cutting your strands (ribbon, yarn, string, etc.) Kumihimo_On_A_Disk. Kumihimo pattern-9 Strand. Design simple. Happy Endings. Kumihimo Tips Galore. Collapsible Loom Building Plans on-line! and soon in print in Oakland, CA!

Un journal d'inspiration sur la création textile... History. The Monoyama period (1573 - 1614) is the beginning of the kumihimo of today. 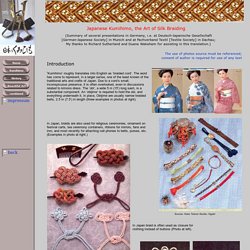 It evidenced change in kimono style with the introduction of a very wide ”obi” (sash) that required a narrow cord to hold it in place. The braided ”obijime” was created for this purpose. The style is still worn in Japan today when wearing a kimono is appropriate. Toward the end of the Edo period (1616 - 1867), the takadai, or high braiding stand, developed into its current form, one allowing for more complex, intricate patterns to be created.

Edo (later named Tokyo) became the center for kumihimo. By the time of the Meiji period (1867 - 1912) samurai culture had declined and the wearing of armor was prohibited by law. Nautical Knot Bracelets. Bring a little seafaring flair to your style with these bright, bold bracelets. 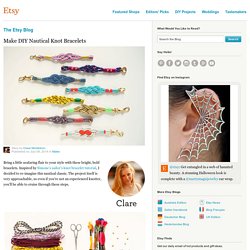 Inspired by Simone’s sailor’s knot bracelet tutorial, I decided to re-imagine this nautical classic. The project itself is very approachable, so even if you’re not an experienced knotter, you’ll be able to cruise through these steps. You will need:Cotton, paracord or maritime cord Measuring tapeLightly colored masking tape E-600 glue or hot glue gunLarge spring claspEmbroidery floss Large needle Pen (not pictured) Optional: Paint brush and acrylic paintRhinestone chainIron-on studsLarge jump rings (not pictured) Step 1: Measure and Cut. How to make a paper weaving artwork. The red thread :: create, inspire, share craft tutorials, DIY, design, interiors TUTORIAL :: How to make a paper weaving artwork Yes, I know that I said I was signing off until the new year, but I forgot about this tutorial! 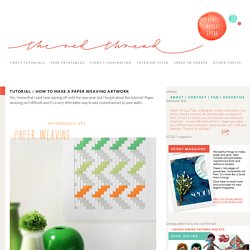 Paper weaving isn’t difficult and it’s a very affordable way to add customised art to your walls. I created this tutorial for Crafttuts+, so head on over there for the full paper weaving tutorial including step by step instructions. It’s Christmas eve and I’ve been having fun with paper weaving to create simple but effective last minute gift toppers using metallic origami paper.