France and Germany to form united front against ISDS. France and Germany are both outspoken in their criticisms of the inclusion of the Investor State Dispute Settlement mechanism in the ongoing trade talks with the US. 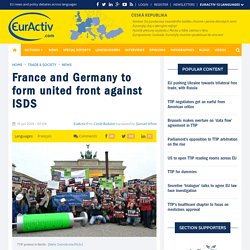 The two countries are discussing throwing their combined weight behind a common position onthe matter. EurActiv France reports. Paris and Berlin want the Investor State Dispute Settlement mechanism (ISDS) removed from in the transatlantic trade treaty currently being negotiated with Washington. Matthias Fekl, the French Secretary of State for Foreign Trade, told EurActiv France that he would "never allow private tribunals in the pay of multinational companies to dictate the policies of sovereign states, particularly in certain domains like health and the environment".

Criticism of TTIP, particularly from France, has crystallised around ISDS. >> Read: TTIP and arbitration: Juncker’s birthday headache Deep-seated fears The French government fears it may have to deal with "exorbitant demands" from large multinationals. ECI-Partner-List_0721.pdf. L'Allemagne se positionne pour gérer le TTIP. Transatlantic Trade and Investment Partnership (TTIP) Enlarge image The transatlantic trade between the US and EU accounted for 700 billion euros in 2010. (© picture alliance) The Transatlantic Trade and Investment Partnership is a prospective trade agreement that could lower trade barriers and increase the flow of goods and services between the EU and US. 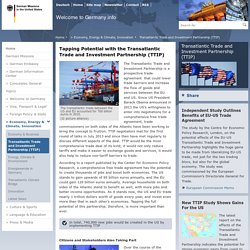 Since US President Barack Obama announced in 2013 the US's willingness to enter into negotiations for a comprehensive free trade agreement, trade commissioners on both sides of the Atlantic have been working to bring the concept to fruition. TTIP negotiators met for the first round of talks in July 2013 and since then have met regularly to discuss different aspects of the deal. TTIP would be the most comprehensive trade deal of its kind; it would not only reduce tariffs and make it easier to exchange goods and services, it would also help to reduce non-tariff barriers to trade. In total, 740,000 new jobs would be created in the US by implementing TTIP. TTIP: The View from Germany. No doubt, the Transatlantic Trade and Investment Partnership (TTIP) has lost momentum. 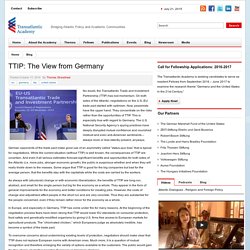 On both sides of the Atlantic, negotiations on the U.S. -EU trade pact started with optimism. Now, pessimists have the upper hand. They concentrate on the risks rather than the opportunities of TTIP. This is especially true with regard to Germany. German opponents of the trade pact make good use of an asymmetry called “status-quo bias” that is typical for negotiations. As always with (structural) change or with economic liberalization, the benefits of TTIP are long-run, abstract, and small for the single person but big for the economy as a whole. In Europe, and especially in Germany, TTIP has come under fire for many reasons. To overcome concerns about undermining existing levels of protection, negotiators should make clear that TTIP does not replace European norms with American ones.

From the side of the opponents, the ISDSM has been declared as a “Trojan horse.” This expectation is simply wrong. In Germany, Anti-Americanism Goes on Display. I will never forget my first trip to Germany. 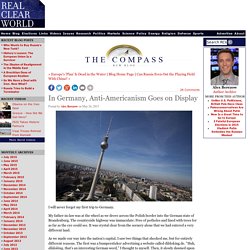 My father-in-law was at the wheel as we drove across the Polish border into the German state of Brandenburg. The countryside highway was immaculate: Free of potholes and lined with trees for as far as the eye could see. It was crystal clear from the scenery alone that we had entered a very different land. As we made our way into the nation's capital, I saw two things that shocked me, but for entirely different reasons. The first was a bumpersticker advertising a website called dildoking.de.

The second shocking thing I saw was a man wearing a shirt that said, "American Military Tour," and it listed many of the cities that U.S. forces had bombed over the past several years. As it turns out, anti-American sentiment is on the rise in Germany. Anti-Americanism in Germany has become such a problem that it appears to be affecting policy at the highest levels. Polling has shown a calamitous drop in support for America in Germany. (AP photo) L'Allemagne et l'Autriche concentrent le plus d'opposition au TTIP. Les dirigeants européens avaient exhorté la Commission à redoubler d'efforts pour communiquer sur le partenariat transatlantique pour le commerce et l'investissement (TTIP), lors du dernier Conseil européen. 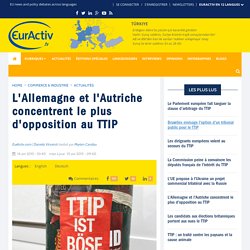