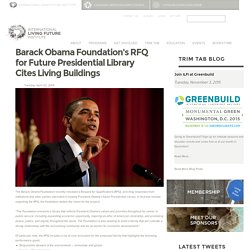 In its press release regarding the RFQ, the foundation details the vision for the project: "The Foundation envisions a library that reflects President Obama’s values and priorities throughout his career in public service, including expanding economic opportunity, inspiring an ethic of American citizenship, and promoting peace, justice, and dignity throughout the world. The Foundation is also seeking to build a facility that will cultivate a strong relationship with the surrounding community and be an anchor for economic development.

" Leonardo DiCaprio Builds an Eco-Resort. In what may be his highest-impact leading role yet, the actor , the Oscar-nominated “Wolf of Wall Street,” is planning to heal an island. 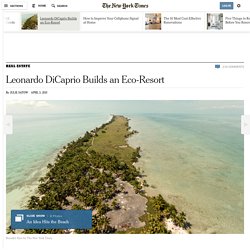 A well-known environmental activist, Mr. DiCaprio bought Blackadore Caye, 104 acres of wild, unpopulated land off the coast of , with a partner soon after he set foot in the country a decade ago. “It was like heaven on earth,” he said, speaking by telephone from . “And almost immediately, I found this opportunity to purchase an island there.”

Now Mr. The Living Building Challenge. What They Do. 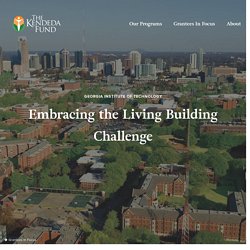 Georgia Tech Receives $30 Million Grant from The Kendeda Fund. Posted September 18, 2015 | Atlanta, GA The Georgia Institute of Technology has received a commitment for $30 million from The Kendeda Fund to build what is expected to become the most environmentally advanced education and research building ever constructed in the Southeast. 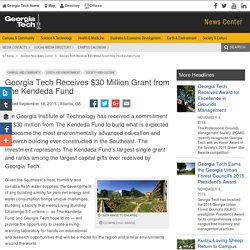 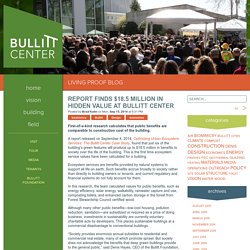 A report released on September 4, 2014, Optimizing Urban Ecosystem Services: The Bullitt Center Case Study, found that just six of the building’s green features will produce up to $18.5 million in benefits to society over the life of the building. This is the first time ecosystem service values have been calculated for a building. Ecosystem services are benefits provided by natural systems to support all life on earth. Such benefits accrue broadly to society rather than directly to building owners or tenants, and current regulatory and financial systems do not fully account for them. 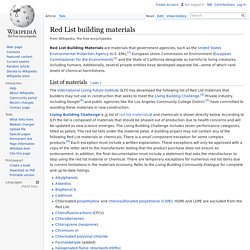 EPA),[1] European Union Commission on Environment (European Commissioner for the Environment),[2] and the State of California designate as harmful to living creatures, including humans. Additionally, several private entities have developed separate list—some of which rank levels of chemical harmfulness. List of materials[edit] The International Living Future Institute (ILFI) has developed the following list of Red List materials that builders may not use in construction that seeks to meet the Living Building Challenge.[3] Private industry, including Google[4] and public agencies like the Los Angeles Community College District [5] have committed to avoiding these materials in new construction. Living Building Challenge’s list of red list materials and chemicals is shown directly below. References[edit] External links[edit] Home. Declare and the Living Building Challenge.

The Living Building Challenge is a philosophy, advocacy tool and certification program that addresses development at all scales. 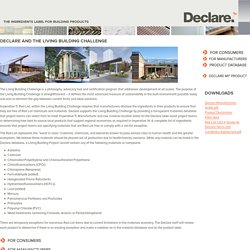 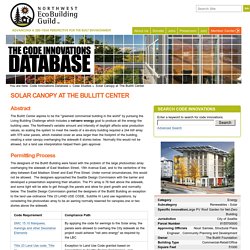 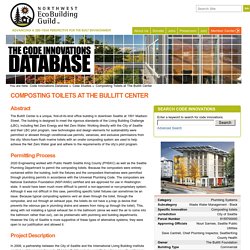 The building is designed to meet the rigorous standards of the Living Building Challenge (LBC), including Net Zero Energy and Net Zero Water. Working directly with the City of Seattle and their LBC pilot program, new technologies and design elements for sustainability were permitted or allowed through conditional-use permits, variances, and exclusive permissions from the city. The Bullitt Center in Seattle Goes Well Beyond Green. 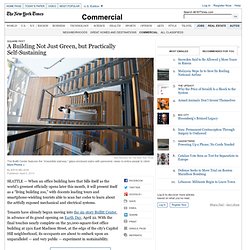 More Photos » Tenants have already begun moving into the six-story Bullitt Center, in advance of its grand opening on , April 22. With the final touches nearly complete on the 50,000-square-foot office building at 1501 East Madison Street, at the edge of the city’s Capitol Hill neighborhood, its occupants are about to embark upon an unparalleled — and very public — experiment in sustainability. Once settled in, they will be guinea pigs in a $30 million living laboratory distinguished by its composting toilets, strict energy and water budgets and a conspicuous lack of on-site parking. Provided that the building clears a few remaining regulatory hurdles, all its water will be supplied by rainwater collected in a 56,000-gallon cistern before being filtered and disinfected. Mechanical Engineering & Electrical Engineering in Portland, Oregon.

Bullitt Center Seattle, Washington Building Type: Commercial office buildingArchitect: Miller Hull PartnershipOwner: Bullitt FoundationSize: 50,000 square feet. This May Be the Most Innovative Energy Efficiency Financing Tool Yet. The renewable energy credit, or REC, is a staple in the retail energy sector. But fourteen years ago, when the tool was first being crafted, very few people understood its potential. "I heard consistently that it couldn't be done. But then we closed our first transaction and we saw this huge shift in thinking from 'You can’t do that' to 'How did you do that?

'" said Rob Harmon, who, as chief innovation officer at the Bonneville Environmental Foundation, helped create the first RECs in 1999. Now Harmon, who is CEO at the Portland, Oregon-based company EnergyRM, believes he and his team have a tool for deploying energy efficiency that will be far more revolutionary. Seattle Group Pilots Energy Efficiency Investment Vehicle. Subscribe to the free weekly newsletter written just for retail energy buyers A group of stakeholders in Seattle have partnered to test an investment vehicle for energy efficiency that’s based on a new meter and that aligns the business interests of utilities and commercial buildings. Asset management firm Equilibrium Capital Group has joined with utility Seattle City Light and EnergyRM, a firm that has invented the Metered Energy Efficiency Transaction Structure (MEETS).

For the past five years, Equilibrium Capital has worked with EnergyRM in creating MEETS to shape a new transaction structure that will allow energy efficiency to be an investment vehicle. MEETS relies on a key innovation: EnergyRM’s patented energy efficiency meter, the DeltaMeter, which measures the energy yield from deep energy efficiency retrofits or designs over extended periods. In a nutshell, MEETS turns energy efficiency into a product. Seattle Trying Innovative Financing Model for Building Efficiency.

Benjamin Romano6/12/13 Seattle’s municipal utility and the people behind one of the world’s most-efficient commercial buildings are trying to reinvent the business model for financing so-called deep energy efficiency improvements, which could generate hundreds of billions of dollars of construction activity and energy savings, and significantly reduce greenhouse gas emissions. Seattle City Light and the Bullitt Foundation plan to enter a first-of-its-kind contract that would quantify the energy savings of the Bullitt Center relative to a standard commercial building and pay for them more like utility energy purchases. The goal is to unlock the low-cost capital necessary to do what energy efficiency experts like to call “deep” improvements, projects—far beyond replacing the light bulbs—that can cut a building’s energy use in half.

Buildings offer a full meal. Meet MEETS Harmon. Net Zero Office Buildings Europe. Zero-energy building. A zero-energy building, also known as a zero net energy (ZNE) building, net-zero energy building (NZEB), or net zero building, is a building with zero net energy consumption, meaning the total amount of energy used by the building on an annual basis is roughly equal to the amount of renewable energy created on the site. These buildings consequently do not increase the amount of greenhouse gases in the atmosphere. They do at times consume non-renewable energy and produce greenhouse gases, but at other times reduce energy consumption and greenhouse gas production elsewhere by the same amount. Most zero net energy buildings get half or more of their energy from the grid, and return the same amount at other times. Buildings that produce a surplus of energy over the year may be called "energy-plus buildings" and buildings that consume slightly more energy than they produce are called "near-zero energy buildings" or "ultra-low energy houses".