MultiBeast 6.0 Update. MultiBeast, the ultimate post-installation utility, has been updated to version 6.0 for OS X Mavericks. 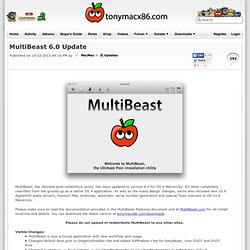 Apod wrote: Ok, I'll bite seeing as I brought up the EULA. 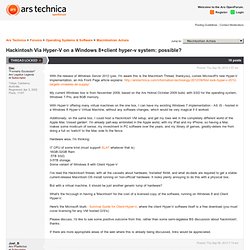 Since it's in the EULA it's very unlikely that any company producing virtualisation software will produce drivers that will make it easy to run OS X on non-Apple hardware. Apple tends to be quite ready to sue and they probably don't want that hassle. On a commercial level you're absolutely right and it's obvious. I'm personally curious why we haven't really moved on in terms of hackintoshing at the hacker level in terms of technique since the early 2007's, when it feels like I was doing almost the same thing to try and get it to work (and scratching our heads at writing selected drivers). Perhaps, ultimately, because it's purely a cost-driven exercise and if it gets like too much work, a lot of people would just go and buy a Mac - so there's a talent drain there?

From what I see, a lot of non-Apple people seem to be looking to pay a *lot* less to get the same and I know that's not really possible without compromises. Quote: Updating the Hackintosh to Mavericks - leolabs.org. This tuesday, Apple released its new version of Mac OS X called Mavericks. 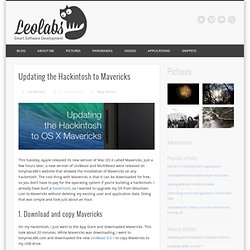 Just a few hours later, a new version of UniBeast and MultiBeast were released on tonymacx86′s website that allowed the installation of Mavericks on any hackintosh. The cool thing with Mavericks is that it can be downloaded for free, so you don’t have to pay for the operating system if you’re building a hackintosh. I already have built a hackintosh, so I wanted to upgrade my OS from Mountain Lion to Mavericks without deleting my existing user and application data.

Doing that was simple and took just about an hour. 1. On my Hackintosh, I just went to the App Store and downloaded Mavericks. The USB drive has to be formatted in “Mac OS Extended (Journaled)”, so I opened Disk Utility and formatted it. When Mavericks finished downloading, I opened UniBeast and selected the USB drive I just formatted. 2. 3. I was very amazed about how easy it was to upgrade my hackintosh. The Always Up-to-Date Guide to Building a Hackintosh (OS X 10.9) MultiBeast 6.0 Update. UniBeast 3.0 Update.