The Confidential Memo at the Heart of the Global Financial Crisis - VICE.

The whistleblowers: yes, there ARE people speaking out! : ureka.org. Whistleblower General Cartwright: demonized by a criminal US government. (Before It's News) RELATED: Beyond Snowden: US General Cartwright has been indicted for espionage 21st Century Wire says… With all the talk of Edward Snowden, many would not have heard the name General James Cartwright, who is quite possibly the most high-ranking, high-profile whistleblower in the history of the United States, who is the Obama administration’s latest victim by way of the 1917 Espionage Act. 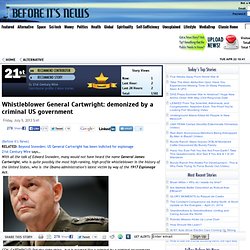 GEN. CARTWRIGHT: Did the right thing – but is treated like a criminal by a criminal government. As we pointed out earlier this week, Cartwright was regarded as ‘Obama’s General’ and chief military adviser, but he fell foul of K Street and war financiers, after blowing the whistle on the highly illegal, and potentially dangerous, ‘Operation Olympic Games’, which planted the infamous Stuxnet and Flame viruses in Iranian civilian nuclear facilities in an attempt to destroy their energy program. Gen. Targeted Individuals' 24/7 Nightmare: NSA Whistleblower Tells EU Parliament. (Before It's News) The European Parliament recently got a glimpse of the life-threatening living nightmare that thousands upon thousands of targeted individuals (TIs) experience daily. 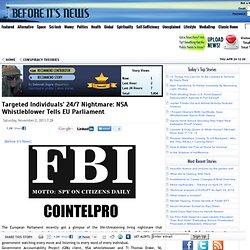 A high-profile NSA whistle blower’s testimony to the lawmakers included what surveillance really means, far more than government watching every move and listening to every word of every individual. Government Accountability Project (GPA) client, NSA whistleblower and TI Thomas Drake, 56, testified before the European Parliament Committee on Civil Liberties, Justice and Home Affairs on September 30, 2013.

Will the U.S. Gov’t Target Whistleblowers With Drones? Yes, things have come this far. 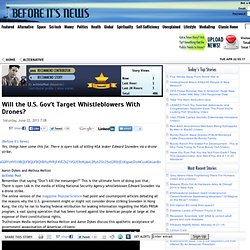 There is open talk of killing NSA leaker Edward Snowden via a drone strike. Remember that saying “Don’t kill the messenger?” This is the ultimate form of doing just that. There is open talk in the media of killing National Security Agency whistleblower Edward Snowden via a drone strike. The online version of the magazine Popular Science had point and counterpoint articles debating all the reasons why the U.S. government might or might not consider drone striking Snowden in Hong Kong, the city he ran to fearing federal retribution for leaking information regarding the NSA’s PRISM program, a vast spying operation that has been turned against the American people at large at the expense of their constitutional rights. Of Course, Good Cop Speaks Out About Arrest Quotas And Tickets - Gets Fired!! (Video)

(Before It's News) Does anyone remember a time when a whistleblower was protected and taken seriously? 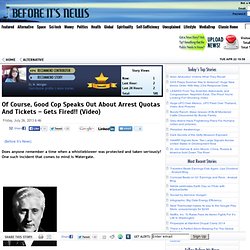 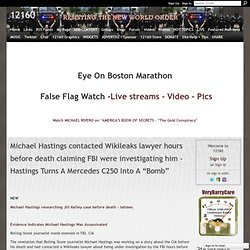 Update:Michael Hastings contacted Wikileaks lawyer hours before death claiming FBI were investigating him - Hastings Turns A Mercedes C250 Into A “Bomb” *** Original post below *** Stacy Summary: I don’t know what drives men to drive 100 mph down a suburban street. But I’ve seen many do it. Usually, however, they’re young or angry , but you never know what happens when guy gets behind the wheel of a Merc.

Journalist Barrett Brown spent his 300th day behind bars this week on a range of charges filed after he used information obtained by the hacker group Anonymous to report on the operations of private intelligence firms...Using information Anonymous took from the firm HBGary Federal, Brown helped discover a secret plan to tarnish the reputations of WikiLeaks and journalist Glenn Greenwald of The Guardian. 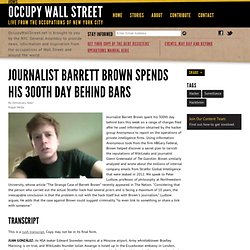 Brown similarly analyzed and wrote about the millions of internal company emails from Stratfor Global Intelligence that were leaked in 2011. We speak to Peter Ludlow, professor of philosophy at Northwestern University, whose article “The Strange Case of Barrett Brown” recently appeared in The Nation. “Considering that the person who carried out the actual Stratfor hack had several priors and is facing a maximum of 10 years, the inescapable conclusion is that the problem is not with the hack itself but with Brown’s journalism,” Ludlow argues. Jailed Journalist Barrett Brown Faces 105 Years For Reporting on Hacked Private Intelligence Firms. Whistleblowers.org: 14 Alternate Websites You Should Know. Whistleblowers. WikiLeaks.1. WikiLeaks Today. Awareness. Stew Webb Federal Whistleblower-Activist by Stew Webb. Thank you for following! 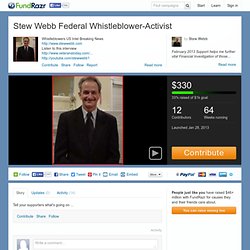 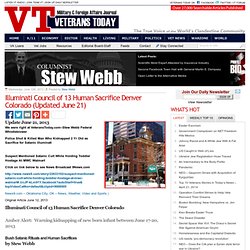 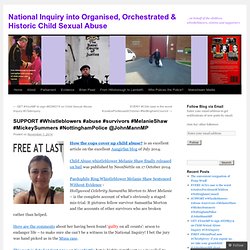 Is an excellent article on the excellent Aangirfan blog of July 2014.