How to Cultivate Collective Intelligence. The first time I heard the word "swarming" in a business context, it made me chuckle. I had an instant visual of bees dressed in suits and carrying briefcases, furiously buzzing over, under, and around a conference table. They weren’t accomplishing anything—just making a lot of noise and looking for something to sting. Then it occurred to me that all worker bees are female. Each bee in my mental image was now wearing a suit with a skirt, and red high heels on all six feet. By this point I was ready to give up on the idea of swarming in business altogether. However, I am a huge believer in collective intelligence, whether at work or in the wild.

Similarly, the human brain is naturally wired for empathy, connectivity, and collaboration. An important issue may develop in another time zone across the world, or an immediate deadline may be set. Progress will depend on your ability to bring together highly functioning groups of diverse people. Introduction to Collective Intelligence. Collective intelligence - Definition. Collective intelligence as characterized by Tom Atlee, Douglas Engelbart, Cliff Joslyn, Ron Dembo, and other theorists, is that which overcomes "groupthink" and individual cognitive bias in order to allow a relatively large number of people to cooperate in one process - leading to reliable action. 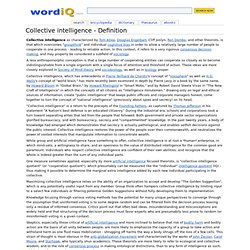 In this context, it refers to a very rigorous consensus decision making, and may properly be considered a subfield of sociology. A less anthropomorphic conception is that a large number of cooperating entities can cooperate so closely as to become indistinguishable from a single organism with a single focus of attention and threshold of action. These ideas are more closely explored in Society of Mind theory and sociobiology, as well as in biology proper. Collective intelligence, which has antecedents in Pierre Teilhard de Chardin's concept of "noosphere" as well as H.G. In 2001 Tadeusz (Ted) Szuba from AGH Univ. See also: External links. Collective Intelligence. Collective Intelligence As we explore ways to generate more effective groups, organizations, institutions, and other human systems, it may help to begin by taking a closer look at collective intelligence. 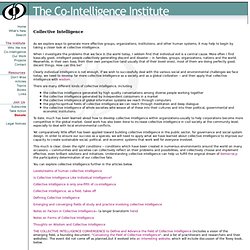 When I investigate the problems that we face in the world today, I seldom find that individual evil is a central cause. More often I find basically good, intelligent people collectively generating discord and disaster -- in families, groups, organizations, nations and the world. Meanwhile, in their own lives, from their own perspective (and usually that of their loved ones), most of them are doing perfectly good, decent things. How can this be? Clearly individual intelligence is not enough. Collective intelligence. Does this person feel playful or irritated? 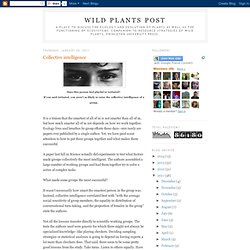 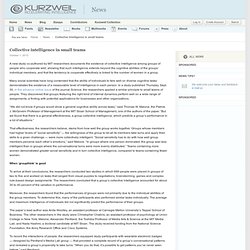 Many social scientists have long contended that the ability of individuals to fare well on diverse cognitive tasks demonstrates the existence of a measurable level of intelligence in each person. In a study published Thursday, Sept. 30, in the advance online issue of the journal Science, the researchers applied a similar principle to small teams of people. They discovered that groups featuring the right kind of internal dynamics perform well on a wide range of assignments, a finding with potential applications for businesses and other organizations. 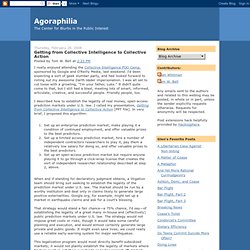 I'd been expecting a sort of geek slumber party, and had looked forward to rolling out my awesome Darth Vader impersonation. I was all set to cut loose with a growling, "I'm your father, Luke. " It didn't quite come to that, but I still had a blast, meeting lots of smart, informed, articulate, creative, and successful people. Friendly people, too. I described how to establish the legality of real money, open-access prediction markets under U.S. law.

That strategy would stand a fair chance—a 75% chance, I'd say—of establishing the legality of a great many in-house and (effectively) public prediction markets under U.S. law. This legalization program would most directly benefit subsidized markets; it would not plainly establish the legality of markets where traders could invest their own funds or hedge against off-market risks.