All things Discordian and Magick. 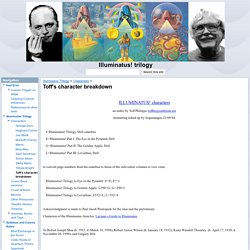 Characters an index by Toff Philippo toffbn@earthlink.net formatting tidied up by bogusmagus 23/09/04. 5 Wearable Tech Devices You Can Use for Magick. Discordia. Site News Archives. Discordianism. Da Rules - Fairly Odd Parents Wiki - Timmy Turner and the Fairly Odd Parents! Da Rules u' Fairy Godparenting is the rulebook, written by Jorgen von Strangle, that all fairies and their godchildren have to follow. 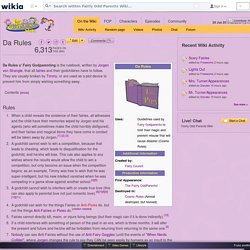 They are usually broken by Timmy, or are used as a plot device to prevent him from simply wishing something away. Rules When a child reveals the existence of their fairies, all witnesses and the child have their memories wiped by Jorgen and his agents (who will sometimes make the child horribly disfigured), and their fairies and magical items they have come in contact will be taken away by Jorgen.[1] [2] [3]A godchild cannot wish to win a competition, because that leads to cheating, which leads to disqualification for the godchild, and he/she will lose.

Note: These rules have been featured in the TV show and video games, but there is likely far more rules in Da Rules book that have never come up. 103.5 KLST - Powered By Caster.fm. Part 1 - Interview with Phil Hine, chaos magician. Top 10 Things You Shouldn't Know About the Illuminati. Warning: The following information is not suitable for anyone who would like to remain blind. 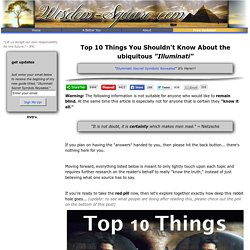 At the same time this article is especially not for anyone that is certain they "know it all. " "It is not doubt, it is certainty which makes men mad. " ~ Nietzsche If you plan on having the "answers" handed to you, then please hit the back button... there's nothing here for you. Moving forward, everything listed below is meant to only lightly touch upon each topic and requires further research on the reader's behalf to really "know the truth," instead of just believing what one source has to say. If you're ready to take the red pill now, then let's explore together exactly how deep this rabbit hole goes... 10. 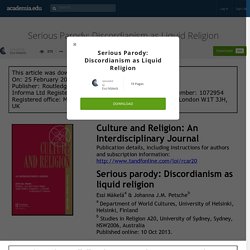 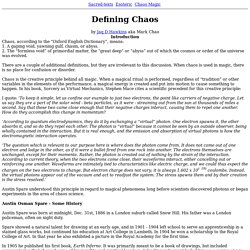 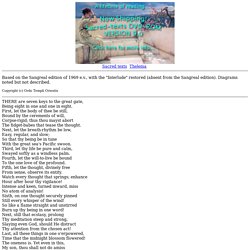 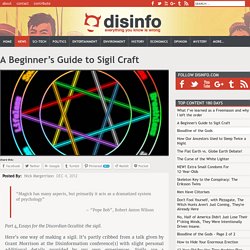 Here’s one way of making a sigil. It’s partly cribbed from a talk given by Grant Morrison at the Disinformation conference[1] with slight personal additional details provided by my own experiences. Sigils are a low-magick technique which will not fail to get you exactly what you need. It can become a high-magick technique but for the moment we’ll just stick to the basics[2]. One important thing to note is that sigils always appear to work.

Secondly, the following is a (in my opinion better) version of other ideas that have been kicking round recently such as, The Secret, Cosmic Ordering, and, to a lesser extent, “positive thinking”[3]. All these above techniques have common elements. Step one: Decide upon your will. — All your workings should be done with pieces of paper and a pen. Chaos, Magic, And The Band Who Burned A Million Pounds - Revisiting The KLF. They might have burned all their money for no discernable reason, but in a world where everyone is an attention seeker, that's no reason to dislike them... 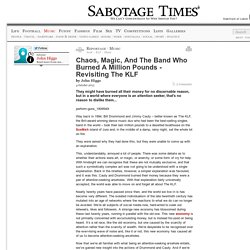 Way back in 1994, Bill Drummond and Jimmy Cauty – better known as The KLF, the Brit-award winning dance music duo who had been the best-selling singles band in the world – took their last million pounds to a deserted boathouse on the Scottish island of Jura and, in the middle of a damp, rainy night, set the whole lot on fire. Illuminati Official Website - IlluminatiOfficial.org. !Chaos. The 23 Apples of Eris. /eris/ - Discordia.