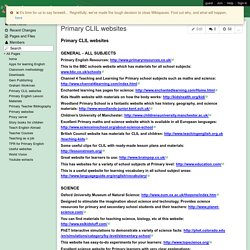 Get it on the web or iPad! Guest Join | Help | Sign In grahamworkmanprimary Home guest| Join | Help | Sign In Turn off "Getting Started" How Video Games Have Become The Perfect Storytelling Medium : CULTURE : Tech Times. If you grabbed a copy of Until Dawn for your PlayStation 4 last week, you've already delved into the game, as well as the game's involved story. 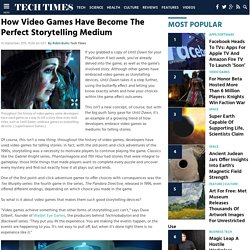 Although other games have embraced video games as storytelling devices, Until Dawn takes it a step further, using the butterfly effect and letting you know exactly when and how your choices within the game affect outcomes. This isn't a new concept, of course, but with the big push Sony gave for Until Dawn, it's an example of a growing trend of how developers embrace video games as mediums for telling stories.

Of course, this isn't a new thing: throughout the history of video games, developers have used video games for telling stories: in fact, with the old point-and-click adventures of the 1990s, storytelling was a necessity to motivate players to continue playing the game. The Solar System. Our solar neighborhood is an exciting place. 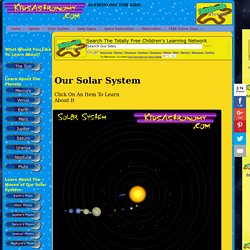 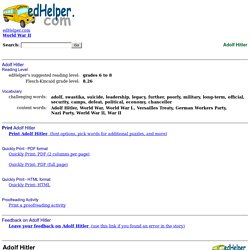 He was born on April 20, 1898, in Braunau, Austria, a small town across the river from Germany. 2 During high school, he did poorly in school and eventually dropped out. He said that he wanted to be an artist. 3 In 1907, Hitler moved to Vienna, Austria, where he planned to attend art school. However, he was not accepted into art school. Hitler remained in Vienna anyway, living among art students. 4 In 1913, as World War I was beginning, Hitler moved to Germany and joined the German army.

Programme Pestalozzi - Conseil de l'Europe. The MY HERO Project. Developing literacy through CLIL - Clil magazine. Do Coyle, Ana Halbach, Oliver Meyer, Kevin Schuck and Teresa Ting We all know that our students need to learn how to produce good, well-structured texts in their CLIL language as much as in their mother tongue. 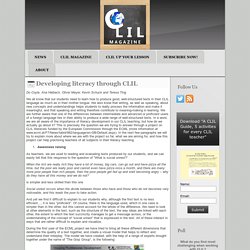 We also know that writing, as well as speaking, about new concepts and understandings helps students to really process the information and make it meaningful, and that speaking and writing therefore contribute to meaning-making in learning. We are further aware that one of the differences between intermediate and advanced or proficient users of a foreign language lies in their ability to produce a wide range of well-structured texts. In a word, we are all aware of the importance of literacy development in our CLIL teaching, but how do we actually go about it? This is precisely the question we are trying to answer through a project on CLIL literacies funded by the European Commission through the ECML (more information at www.ecml.at/F7/News/tabid/982/language/en-GB/Default.aspx). 21st Century Skills Definitions. The IMLS Project Team and Task Force considered the list of skills commonly referred to as "21st Century Skills" and modified it slightly to better align with library and museum priorities.1 The resulting list includes the following additions: Basic Literacy, Scientific & Numerical Literacy, Visual Literacy, Cross-Disciplinary Skills, and Environmental Literacy. 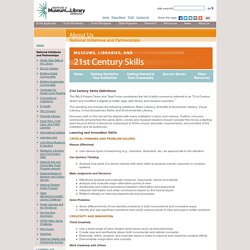 Not every skill on this list will be aligned with every institution’s vision and mission. Further, not every community will prioritize the same skills. Library and museum leaders should consider this list as a starting point beyond which it should be customized to fit the unique character, requirements, and priorities of the institution and its audiences. Reason Effectively Use various types of reasoning (e.g., inductive, deductive, etc.) as appropriate to the situation Use Systems Thinking Analyze how parts of a whole interact with each other to produce overall outcomes in complex systems. Using Pattern Recognition to Enhance Memory and Creativity. "If seven friends in turn rapidly told him their phone numbers, he could calmly wait until the last digit was spoken and then, from memory, key all seven friends' numbers into his phone's contact list without error. 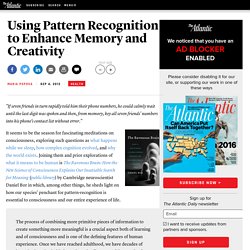 " Inspire Thoughtful Creative Writing Through Art. A few years ago, I showed my sixth graders The Gulf Stream by Winslow Homer. 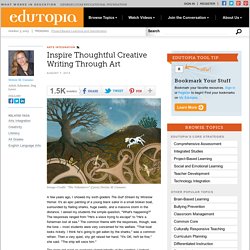 It's an epic painting of a young black sailor in a small broken boat, surrounded by flailing sharks, huge swells, and a massive storm in the distance. I asked my students the simple question, "What's happening? " CHUNKING- READING STRATEGY ACTIVITY SHEETS. The Guhenian System. Guhen Kitaoka John Grinder, one of the co-founders of NLP (Neuro-linguistic Programming), held a one day workshop in London a few years ago. 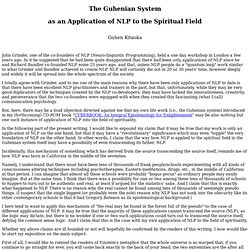 Chunking. Creative tools > Chunking When to use it | How to use it | Example | How it works | See also When to use it Use it to look at a problem in different lights to help identify the best way of defining the problem. 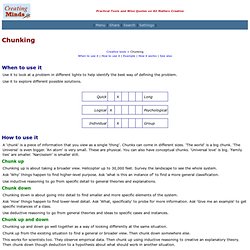 Use it to explore different possible solutions. Using Pattern Recognition to Enhance Memory and Creativity. Chunking. The Creativity Matrix: Chunking Up, Sideways & Laterally Posted on 24 October 2009. Tags: author creativity, Book Ideas, chunking, creativity, lateral thinking, nlp If you're new here, you may want to subscribe to my RSS feed. Thanks for visiting! The Author’s Creativity Matrix This uses elements of matching and mis-matching as well as big picture and detail to produce lots of ideas and content to bring out a full range of creative flexibility you may not have thought you had.

The big idea, benefits or promiseA title and subtitleThe main chapter headingsYour target audienceWords for the blurb. Concept Attainment. The 4 C’s model – Do Coyle. The lighter version CLIL is complex and context-sensitive.There are general parameters for CLIL.These are: Cognition, Culture, Content, Communication.Any particular CLIL model or methodology needs to consider the relative value/importance of the parameters above.Language as a learning tool operates in three ways: OF – FOR – THROUGH The 4Cs Framework. Khan Academy.