SOPA (USA) Why I'm suing the US government to protect internet freedom. Poles protest bill on intellectual property rights. The bill would fight counterfeiting and piracyOpponents say it amounts to Internet censorshipPoland signed the treaty Thursday (CNN) -- Thousands of protesters have taken to the streets of Poland over the signing of an international treaty to enforce intellectual property rights on the Internet. Police said more than 10,000 people have taken part in the countrywide protests, which began Wednesday and are set to continue Friday.

A group of lawmakers in parliament also protested the signing Thursday in Tokyo by the Polish ambassador to Japan. The legislation must be ratified by the Polish parliament before coming into effect. Protesters held signs and banners reading "No to ACTA. " Activists hacked several websites, including that of the prime minister, to protest the signing.

A Battle Against the SOPA/PIPA Prohibition. So much has been said, wrote, battled about the Stop Online Piracy Act and its twin Protect IP Act. 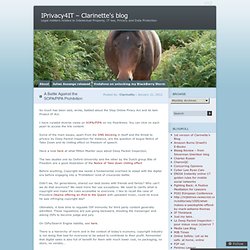 I have curated diverse views on SOPA/PIPA on my Pearltrees. You can click on each pearl to access the link content: Some of the main issues, apart from the DNS blocking in itself and the threat to privacy by Deep Packet Inspection for instance, are the question of bogus Notice of Take Down and its chilling effect on freedom of speech. Have a look here at what Milton Mueller says about Deep Packet Inspection. The two studies one by Oxford University and the other by the Dutch group Bits of Freedom are a good illustration of the Notice of Take down chilling effect . Didn’t we, for generations, shared our best books with friends and family?

Wendy’s Blog: Legal Tags » Copyright in Congress, Court, and Public. Yesterday, while hundreds of sites (including this one, along with Google, Wikipedia, and Reddit) were going black to protest SOPA and PIPA, the Supreme Court released its own copyright blackout, Golan v. 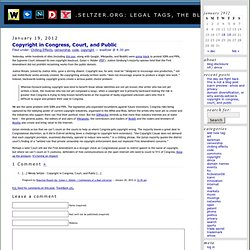 Holder (PDF). Justice Ginsburg’s majority opinion held that the First Amendment did not prohibit reclaiming works from the public domain. Justice Breyer, joined by Justice Alito, gave a stirring dissent. Copyright law, he said, must be “designed to encourage new production,” not just redistribute works already created. Re-copyrighting already-written works “does not encourage anyone to produce a single new work.” We see the same problem with SOPA and PIPA.

Curated by curators. Getting out of GoodDaddy. Internet blockout 18/01. Hollywood to suspend production on 18/01. SOPA delayed after Obama Admin. Alternative to SOPA and PIPA - Piracy friend. Obama responds to people petitions. Richard O'Dwyer. Richard O'Dwyer (born 5 May 1988) is a British computer programmer[1] who created the TVShack.net search engine while a student at Sheffield Hallam University. 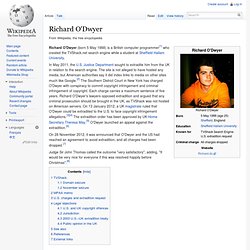 On 28 November 2012, it was announced that O'Dwyer and the US had reached an agreement to avoid extradition, and all charges had been dropped.[7] Judge Sir John Thomas called the outcome "very satisfactory", adding, "It would be very nice for everyone if this was resolved happily before Christmas".[8] TVShack[edit] Official TV Shack Logo O'Dwyer, a student at Sheffield Hallam University, created the search engine TVShack at the domain name TVShack.net in December 2007.[9][10] The search engine had the categories Movies, Television, Anime, Music and Documentaries, included the disclaimer "TV Shack is a simple resource site. Domain seizure[edit] On 30 June 2010 U.S. Besides O'Dwyer's TVShack.net, the other domains involved were Movies-Links.tv, FilesPump.com, Now-Movies.com, PlanetMoviez.com, ThePirateCity.org and ZML.com. U.K. Judge Orders Accused Copyright Pirate Extradited to U.S. Getty Images In a first-of-its-kind case, a judge in the U.K. has ordered that a British student who ran a website that linked to free films and TV shows can be extradited to the United States. 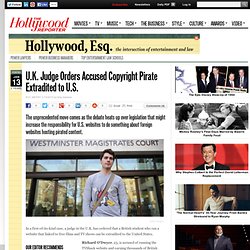 Richard O'Dwyer, 23, is accused of running the TVShack website and earning thousands of British pounds in advertising before a crackdown by the U.S. Immigration and Customs Enforcement agency. Slash blog » My Call to Senator Schumer’s Office on PIPA: It’s So Much Worse Than I Thought. Today I called a Senator’s office for the first time. 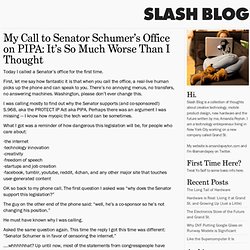 First, let me say how fantastic it is that when you call the office, a real-live human picks up the phone and can speak to you. There’s no annoying menus, no transfers, no answering machines. Washington, please don’t ever change this. I was calling mostly to find out why the Senator supports (and co-sponsored!) S.968, aka the PROTECT IP Act aka PIPA. Cheezburger Sites To Be Blacked Out January 18 To Protest SOPA and PIPA. Ben Huh, CEO of the popular Cheezburger Network, tweeted Thursday that the network will be blacking itself out January 18 to protest the two bills Congress is working to pass that would, among other things, encourage domain name filtering against web sites deemed to be dedicated to copyright and trademark infringement. 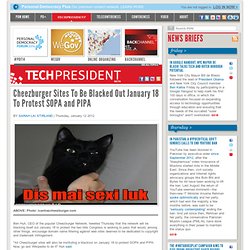 "All Cheezburger sites will also be instituting a blackout on January 18 to protest SOPA and PIPA. Now, go ask Wikipedia to do it" Huh said. The Cheezburger network encompasses the infamous I Can Haz Cheezburger?

Spain SOPA like. SOPA could kill OpenEd. Pro SOPA companies. Cafe AJM: #SOPA is the hammer. Will... NO SOPA: 'American Censorship Day' GODADDY support to SOPA. Law Firms getting out of SOPA list. Politician and SOPA. Kasperky against SOPA. What is SOPA. Web founders against SOPA. ICANN against SOPA. EFF SOPA. EU And SOPA. Facts on SOPA. Us opposition to SOPA. TAKE ACTION: Your Website May Be Shut Down! Scary Facts On SOPA [Stop Online Piracy Act]