ASEAN's ‘New’ Data Privacy Laws: Malaysia, the Philippines and Singapore by Graham Greenleaf. In the first quarter of 2012, the ASEAN region (Association of South East Asian Nations) has become the most active region in the world for new privacy developments. 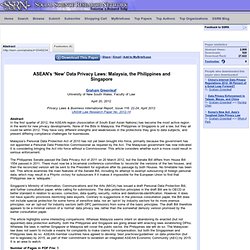 None of the Bills in Malaysia, the Philippines or Singapore is yet a law, but they all could be within 2012. They have very different strengths and weaknesses in the protections they give to data subjects, and present differing compliance challenges for businesses. Malaysia’s Personal Data Protection Act of 2010 has not yet been brought into force, primarily because the government has not appointed a Personal Data Protection Commissioner as required by the Act. The Malaysian government has now indicated it is considering bringing the Act into force without a Commissioner. This article considers whether such a move could result in serious enforcement. The APEC Asia-Pacific Privacy Initiative. The APEC Asia-Pacific Privacy Initiative – a new route to effective data protection or a trojan horse for self-regulation? 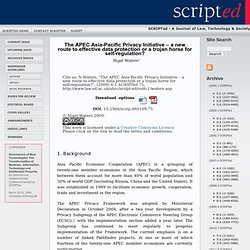 Nigel Waters 1. Background Asia Pacific Economic Cooperation (APEC) is a grouping of twenty-one member economies in the Asia Pacific Region, which between them account for more than 40% of world population and 50% of world GDP (including Russia, China and the United States). It was established in 1989 to facilitate economic growth, cooperation, trade and investment in the region. The APEC Privacy Framework was adopted by Ministerial Declaration in October 2004, after a two year development by a Privacy Subgroup of the APEC Electronic Commerce Steering Group (ECSG), with the implementation section added a year later. Relevant papers can be found on the APEC website. 2.

There has so far been relatively little independent critical analysis of the APEC Privacy Framework. At one extreme, Pounder has stated that: A more positive view has been put by Tan. 3. APEC endorses cross border data protection rules. APEC’s proposed rules aim to improve cross border data flow and promote a unified approach to data protection by organisations operating across APEC member states. 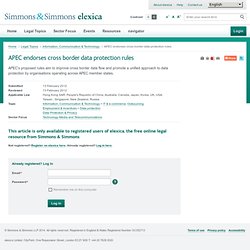 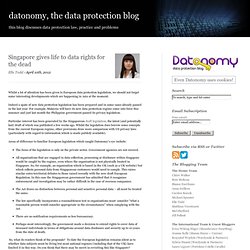 Indeed a spate of new data protection legislation has been prepared and in some cases already passed in the last year. For example, Malaysia will have its new data protection regime come into force this summer and just last month the Philippine government passed its privacy legislation. Particular interest has been generated by the Singaporean draft legislation, the latest (and potentially last) draft of which was published a few weeks ago. Whilst the legislation does borrow some concepts from the current European regime, other provisions draw more comparison with US privacy laws (particularly with regard to information which is made publicly available).

Areas of difference to familiar European legislation which caught Datonomy’s eye include: A quick briefing on Singapore’s new DP Bill. Much to do to keep data private. While the Government gets set to enforce the Personal Data Protection Act, all involved should comply with the provisions of the Act now instead of adopting a wait and see' attitude. 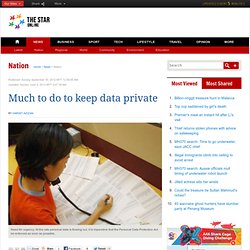 SINGAPORE recently had the first reading of its Personal Data Protection Act in Parliament. Many in the republic were buoyed by the development, confident that the passing of the bill “should be just around the corner”. Surprisingly, Singapore lags behind Malaysia in this matter; Malaysia is the first country in the South-East Asian region to draft such a bill way back in 2000. Our Personal Data Protection Act (PDPA) was gazetted in 2010 after gestating through several public consultations and revisions. Long overdue However, now that the “sunrise period” before the law takes effect for the Information, Communications and Culture Ministry to train personnel and put procedures in place is fast fading, many are asking when our law will be enforced. Serious threat Having a policy is the first important step.