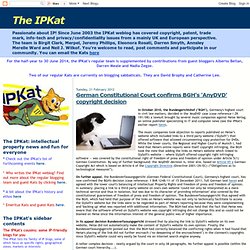 The music companies took objection to reports published on Heise’s website which included links to a third party website ("SlySoft") that offered software that allowed circumventing copy protection for DVDs. While the lower courts, the Regional and Higher Courts of Munich I, had held that Heise's online reports were itself copyright infringing, the BGH took the view that adding the links on Heise's website which linked to SlySoft's website -- where SlySoft offered copyright right infringing software -- was covered by the constitutional right of freedom of press and freedom of opinion under Article 5(1) German Constitution. Judge Alex Kozinski & Eugene Volokh, “Lawsuit, Shmawsuit” <*> 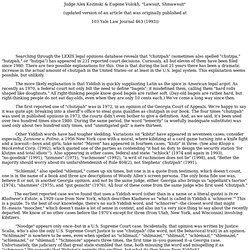 Curiously, all but eleven of them have been filed since 1980. There are two possible explanations for this. The more likely explanation is that Yiddish is quickly supplanting Latin as the spice in American legal argot. The first reported use of "chutzpah" was in 1972, in an opinion of the Georgia Court of Appeals. Other Yiddish words have had tougher sledding. "Schlemiel," also spelled "shlemiel," comes up six times, but one is in a quote from testimony, which doesn’t count, one is in the name of a book and three are descriptions of Woody Allen’s screen persona. "Noodge" appears only once--but in a U.S.

The same happens to be true of "putz" and of "mensch. " 003-5022560-6168338. Freedom of Speech and Injunctions in Intellectual Property Cases by Mark A. Lemley, Eugene Volokh. Preliminary injunctions against libel, obscenity, and other kinds of speech are generally considered unconstitutional prior restraints. 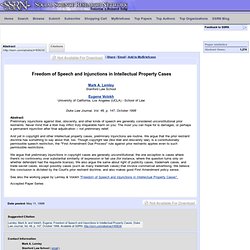 Never mind that a libel may inflict truly irreparable harm on you: The most you can hope for is damages, or perhaps a permanent injunction after final adjudication -- not preliminary relief. And yet in copyright and other intellectual property cases, preliminary injunctions are routine. We argue that the prior restraint doctrine has something to say about that, too. Though copyright law (like libel and obscenity law), is a constitutionally permissible speech restriction, the "First Amendment Due Process" rule against prior restraints applies even to such permissible restrictions.