Fingerprint. Biometrics at school. Biometrics and privacy: Let your body be your key. Passwords have been essential to the security of our personal information as well as that of large corporations. 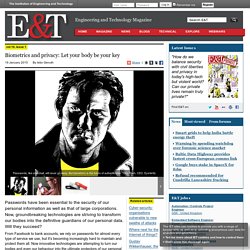 Now, groundbreaking technologies are striving to transform our bodies into the definitive guardians of our personal data. Will they succeed? From Facebook to bank accounts, we rely on passwords for almost every type of service we use, but it's becoming increasingly hard to maintain and protect them all. Now innovative technologies are attempting to turn our bodies and even our behaviour into the ultimate protectors of our personal data. Will they succeed where countless others have failed? Passwords are the main way we identify ourselves online. The problem with passwords Passwords are not new. This security model, based on a username and single password, has proved to be lacking.

This is just half the story. Security experts tend to agree that passwords have many more drawbacks than advantages. Us as passwords It's all in the eyes Three-factor security Are passwords dead? Politician's fingerprint 'cloned from photos' by hacker. A member of the Chaos Computer Club (CCC) hacker network claims to have cloned a thumbprint of a German politician by using commercial software and images taken at a news conference. 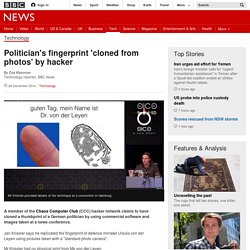 Jan Krissler says he replicated the fingerprint of defence minister Ursula von der Leyen using pictures taken with a "standard photo camera". Mr Krissler had no physical print from Ms von der Leyen. Fingerprint biometrics are already considered insecure, experts say. Watch XFINITY Videos Online. Privacy & EDiscovery. Pin It In a recent article, published by the Huffington Post, Isabelle Falque Perrotin, the President of the CNIL * , summarizes the findings of a study that the CNIL had commissioned on the use of photos in social media. 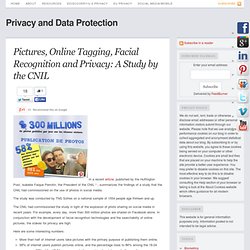 The study was conducted by TNS Sofres on a national sample of 1554 people age thirteen and up. The CNIL had commissioned the study in light of the explosion of photo sharing on social media in recent years. For example, every day, more than 300 million photos are shared on Facebook alone. UAE holds world’s largest biometric database. Abu Dhabi: The UAE holds the largest biometric database in the world, the Emirates Identity Authority has announced. 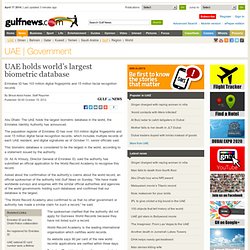 The population register of Emirates ID has over 103 million digital fingerprints and over 15 million digital facial recognition records, which includes multiple records of each UAE resident, and digital signatures as of October 11, senior officials said. This biometric database is considered to be the largest in the world, according to a statement issued by the authority. Dr. Ali Al Khoury, Director General of Emirates ID, said the authority has submitted an official application to the World Record Academy to recognise this record. From Fingerprints to DNA: Biometric Data Collection in U.S. Immigrant Communities and Beyond.

Biometrics at US Borders.

Wearable cameras. Read iris. MPs flag privacy concerns in Freedoms Bill. Biometrics in workplace. A simple URL shortener. To Protect Our Amendment Rights, to Maintain our Privacy, To Provide For the Common Good. Hi-tech eye scanners that track passengers in airport go on trial in UK. By Daily Mail Reporter Updated: 10:30 GMT, 16 November 2010 Passengers will have their eyes scanned as soon as they check in as part of a new trial a major UK airport. 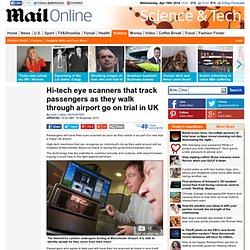 High-tech machines that can recognise an individual's iris as they walk around will be installed at Manchester Airport at check in during the government-backed pilot. No hiding place - facial biometrics will ID you, RSN. High performance access to file storage. 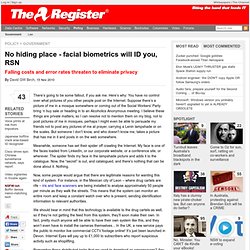 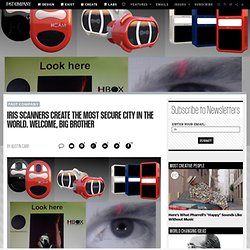 Dick's dystopian future, where the public is tracked everywhere they go, from shopping malls to work to mass transit to the privacy of their own homes. The technology is here. I've seen it myself. Aussie kids can defeat fingerprint scanners with Gummi Bears. ‘Paspoortbiometrie is mensenrechtenschending’ Een collectieve mensenrechtenschending. 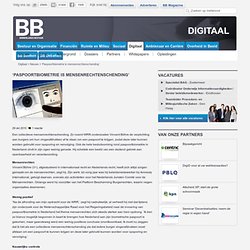 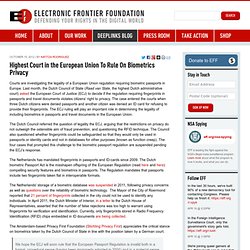 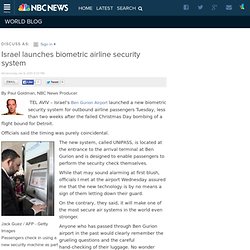 The State of Israel and the Biometric Database Law: Political Centrism and the Post-Democratic State - The Israel Democracy Institute. "[T]he state," wrote Aristotle in his Politics, "is by nature clearly prior to the family and to the individual, since the whole is of necessity prior to the part; for example, if the whole body be destroyed, there will be no foot or hand, except in an equivocal sense, as we might speak of a stone hand... "1 NoteAristotle, Politics, Book I, Part II, Mark 1253a: See Aristotle, Politics, trans. Benjamin Jowett (NY: Dover Publications, 2000) or online version. In Aristotle's "whole body" metaphor, the state, like the individual person, is a whole composed of various parts—the group of people who reside in it, the polis.

If, as Aristotle maintains, "man is by nature a political animal," a person must therefore belong to a political framework of some kind: "[H]e who by nature and not by mere accident is without a state, is either a bad man or above humanity... "2.