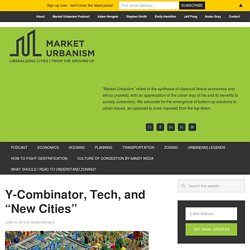 Some existing cities will get bigger and there’s important work being done by smart people to improve them. We also think it’s possible to do amazing things given a blank slate. Our goal is to design the best possible city given the constraints of existing laws. They are embarking on an undertaking of noble intentions, and I will explain why the technology sector needs to be at the forefront of thinking about cities. However, in the pursuit of designing “new” cities from a “blank slate” they have begun their quest with one fatally flawed premise, that wise technocrats can master-build entirely new cities catering to the infinitely diverse set of needs and desires of yet-to-be-identified citizens. Any visions of city-building must first humbly acknowledge that cities are an “emergent” phenomena. According to economist Friedrich Hayek: Urban Tech Startup Accelerator Program. 5 Largest Tech Incubators and Companies that Target Urbanism. © Kevin Hale - Paul Graham of Y Combinator laying down the ground rules for Prototype Day Tech companies are slowly changing the way we work, communicate, do business and travel, but how do they affect our urban environments? 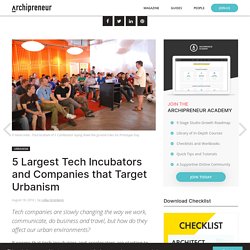 It seems that tech incubators and accelerators are starting to directly target cities. Companies like Uber, AirBnB and WeWork already impact our daily lives without deliberately targeting urban conditions. We are witnessing a proliferation of apps and digital tools that promise to make our cities ‘smart’ by embedding technology into existing infrastructural networks and living units. Critics are voicing their concerns over the idea of cramming huge amounts of technology into every city intersection and alleyway, stating that the one-solution-fits-all approach practiced by most tech startups is not the best way of creating sustainable, smart urban environments. #1 Alphabet #2 Tumml #3 Y Combinator #4 Impact Engine. 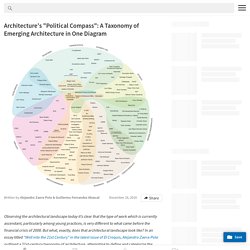 As a follow-up to that essay, Zaera-Polo and Guillermo Fernandez-Abascal set out to apply the newly-defined categories to the emerging practices of today with a nuanced “political compass” diagram. During the last decade, there has been a growing interest within the architectural debate about the possibility of a political re-engagement of the discipline, a subject which had been remarkably absent from the disciplinary debate since the 1970s, but which seems to be back in the spotlight. Methodology Then we asked all practices for a self-assessment, so we could see the deviation between our estimated location and their desired one. UN-Habitat - A Better Urban Future.

What is Placemaking? What if we built our communities around places? 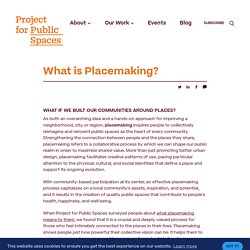 As both an overarching idea and a hands-on approach for improving a neighborhood, city, or region, placemaking inspires people to collectively reimagine and reinvent public spaces as the heart of every community. Strengthening the connection between people and the places they share, placemaking refers to a collaborative process by which we can shape our public realm in order to maximize shared value. More than just promoting better urban design, placemaking facilitates creative patterns of use, paying particular attention to the physical, cultural, and social identities that define a place and support its ongoing evolution.

With community-based participation at its center, an effective placemaking process capitalizes on a local community's assets, inspiration, and potential, and it results in the creation of quality public spaces that contribute to people's health, happiness, and well being. Placemaking is not a new idea. Placemaking is. Interdisciplinary Design Studio.