CIO Bulletin is an interactive, preeminent leadership platform serving as a central resource for information on Business & Information Technology (IT) leaders and their entrepreneurial ventures. 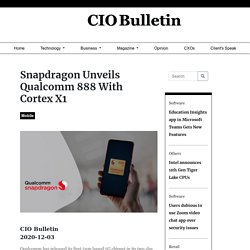 The name of the newly launched Snapdragon 888 came as a surprise as it was expected that Qualcomm would stick to its conventional naming scheme and name it Snapdragon 875. The naming also signifies a significant leap in all three segments denoted by namely CPU, GPU, and AI. The Snapdragon 888 is the first chip to go official with the ARM’s Cortex-X1 core. It is meant to give significant computational benefit at the cost of high power consumption when needed.

Compared to the A78, the X1 can execute 33% more instructions per clock. The Adreno 660 is 35% faster than the previous generation and 20% more power efficient in rendering performance. Google is updating Maps with New Features. Google has brought several new features to the Maps app to facilitate easier communication between businesses and customers.Businesses will also get a verified profile on the Maps. 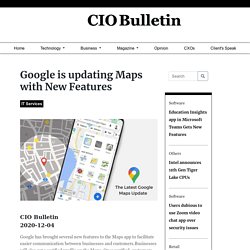 Once verified, customers can directly interact with them on chat directly from the Google Maps app. The messages appear in a separate "Business Messages"in the update tab. Apple may launch MacBook Pro with M2 Chip in 2021. Apple has created a new buzz in the market with the launch of its own Apple Silicon powered Mac Mini and MacBook Air. 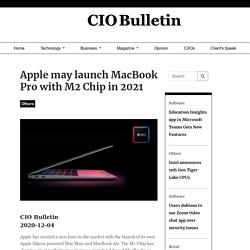 The M1 Chip has shown a great performance increase over Intel-based MacBooks as well as other desktop-grade computers.As Apple had announced,it would slowly phase out Intel Chipset from their Mac lineup and transition into Apple Silicon-based Mac Lineup in a proposed timeline of two years. As per the reports, Apple is on track as promised and is expected to launch its MacBook Pro next year with an even more powerful 5nm based M2 Chip. The new Chip is supposed to power 13-inch and 16-inch MacBook with Apple’s upcoming mini-led display. For now, there is not much information about the M2 Chip, but it is sure that it will be based on a 5nm process.

For reference, M1 Chip was based on a 7nm process, while the Intel latest Chipsets still use 10nm and 14nm process. Salesforce to Acquire Acumen Solutions. Salesforce has made some noise in the business world with its $27.7 billion acquisition of Slack. 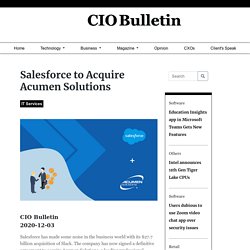 The company has now signed a definitive agreement to acquire Acumen Solutions, a leading professional services firm. Acumen Solutions has deep expertise with Salesforce services and works with various industries, including the public sector, manufacturing, financial services, and more. Virginia-based Acumen Solutions leverages Salesforce to provide businesses, government agencies, and organizations with powerful solutions that help them deliver connected experiences in this digital world. Post-acquisition, Acumen Solutions will become part of Salesforce Professional Services. Salesforce believes that with Vlocity and Acumen Solutions onboard, it can deliver products and solutions to customers to meet their specific needs. The terms of the deal were not disclosed by either company involved. Microsoft is bringing down the shutter of all its retail stores. Following the precedent set by several highly valuable companies like Apple and Nike, Microsoft too has now announced that it will be closing all its retail outlets in a response to the outbreak of COVID-19. 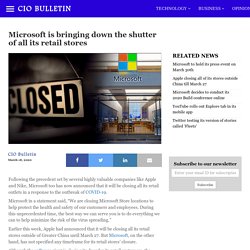 Microsoft in a statement said, “We are closing Microsoft Store locations to help protect the health and safety of our customers and employees. During this unprecedented time, the best way we can serve you is to do everything we can to help minimize the risk of the virus spreading.” Earlier this week, Apple had announced that it will be closing all its retail stores outside of Greater China until March 27. Google Cloud Next conference postponed indefinitely. Traditionally, the tech giant, Google, observes its largest conference of the year around the month of April. 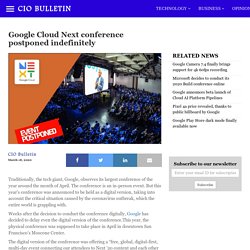 The conference is an in-person event. But this year’s conference was announced to be held as a digital version, taking into account the critical situation caused by the coronavirus outbreak, which the entire world is grappling with. SoftBank unlikely to buy $3 Billion worth WeWork Shares. Softbank has warned that it would not invest $3 billion in a bid to rescue WeWork. 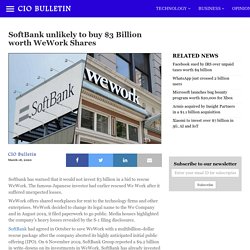 The famous Japanese investor had earlier rescued We Work after it suffered unexpected losses. WeWork offers shared workplaces for rent to the technology firms and other enterprises. GitHub’s new mobile app now available on iOS and Android. GitHub, a company that provides hosting for software development, had no mobile app of its own till date. 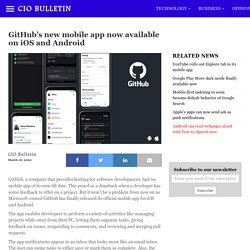 This posed as a drawback when a developer has some feedback to offer on a project. But it won’t be a problem from now on as Microsoft-owned GitHub has finally released its official mobile app for iOS and Android. The app enables developers to perform a variety of activities like managing projects while away from their PC, letting them organize tasks, giving feedback on issues, responding to comments, and reviewing and merging pull requests. The app notifications appear in an inbox that looks more like an email inbox. Bill Gates steps down from Microsoft’s board, to remain an advisor. Bill Gates has decided to step down from the Board of Directors of Microsoft in order to focus on his philanthropic efforts at the Bill & Melinda Gates Foundation. 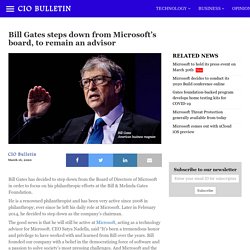 He is a renowned philanthropist and has been very active since 2008 in philanthropy, ever since he left his daily role at Microsoft. Later in February 2014, he decided to step down as the company’s chairman. The good news is that he will still be active at Microsoft, acting as a technology advisor for Microsoft.

Apple clamping down on COVID-19 related apps. People all over the world today rely on apps to stay updated with the latest news. 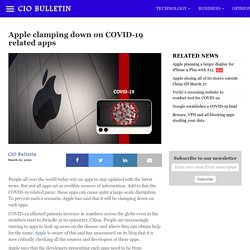 But not all apps act as credible sources of information. Samsung’s shareholders urged to use electronic voting for AGM. The smartphone giant, Samsung Electronics has adopted electronic voting for this year’s annual general meeting, keeping in view the present scenario caused by the ongoing coronavirus outbreak. Also, the company has urged its shareholders to use the electronic voting system to help curb the spread of coronavirus. As stated by the company’s website, Samsung’s AGM is taking place at a convention center in Suwon with a capacity of about 3,000 people. WhatsApp to introduce self-destructive messages soon. After releasing its much-awaited dark mode, WhatsApp is again in the news. This time it has a big update – self-destructing messages. As we saw earlier, WhatsApp had rolled out a feature in which you could manually delete a message after sending, within the limited time of an hour. If the time limit is over, you cannot delete the message for the recipient.

This had been a limiting factor for many users. Anti-terror tech to tackle coronavirus in Israel. Israel’s Prime Minister Benjamin Netanyahu has said in a statement that the country will be using cyber monitoring to minimize the risk of coronavirus transmission. He said that cyber tech monitoring will be deployed to find people who have come in contact with someone carrying the virus. Making the revelation at a news conference in Jerusalem he said the technology has been thus far been not used on civilians but he had no choice in the matter in the light of the recent events. The deployment of the technology is subject to cabinet approval. Redmi can now mass-produce LCD in-display fingerprint sensors. In-display fingerprint readers have been around for a while now, but it only could be fitted under OLED display panels until now. The OLED panels are costly to produce which raises the overall cost of the phone. China shuts down makeshift hospitals as COVID-19 cases drops.

The recent coronavirus outbreak has infected many across the globe, impacted the businesses to a great extent and claimed many lives as well. To treat the infected people, many hospitals dedicated a separate segment to those infected with the COVID-19. The situation now seems to be under control and getting back to normal as China has recently closed most of the makeshift hospitals that were exclusively opened for COVID-19 patients in Wuhan, as the number of fresh cases reported has plunged. As said by the provincial government, Wuhan has witnessed nearly 31,000 patients who have recovered and discharged from the hospital. As reported by Xinhua news agency, eleven of the sixteen makeshift hospitals in Wuhan that were converted from public facilities, including stadiums and schools were suspended just a few days back. The two of the most recent makeshift hospitals to be closed has discharged a final batch of 61 patients.

Walmart says Flipkart may launch an IPO in the long-term. Indian eCommerce giant Flipkart, now acquired by Walmart may soon be on the verge of filing an IPO(Initial Public Offering). Facebook bans ads for medical face masks. Considering the growing concerns over the coronavirus related exploitation, the social media giant, Facebook has temporarily banned all ads and commerce listings related to medical face masks. In scenarios like these, where there is a health crisis like situation prevailing all across the world, it is very important to ensure the circulation of credible and authentic information.